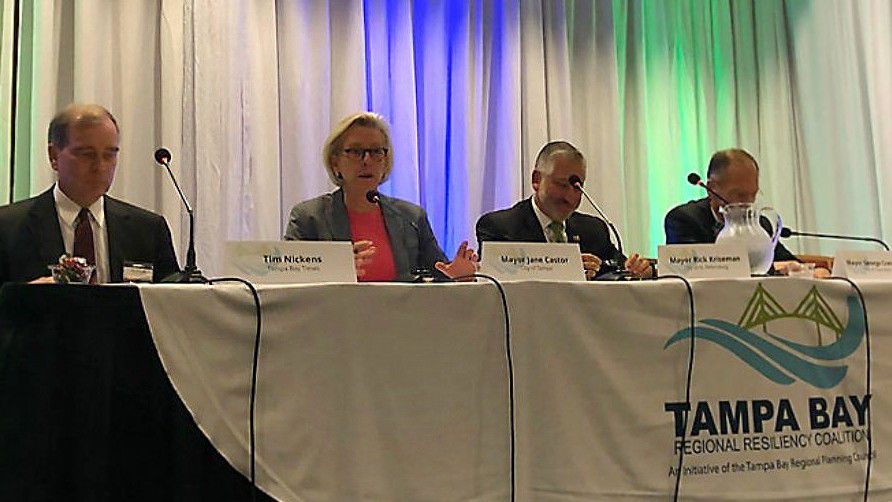 Tampa’s Sustainability and Resiliency Advisory Team Gets to Work

Since taking office last year, Tampa Mayor Jane Castor has made clear that combating climate change will be a key part of her administration.


“There has been a pattern over the years, when you have an absence of federal leadership or an absence of state leadership as we’ve had in Florida, then what we often see are local governments taking actions,” says advisory team member Susan Glickman with the Southern Alliance for Clean Energy.

With the exception of a bill passed in the 2020 session that requires state-financed buildings on the coast to take sea level rise into account before starting construction, the Florida Legislature has done little when it comes to addressing climate change over the past decade.

But city councils in 11 Florida cities have now committed to establishing goals to get off of fossil fuels in the coming decade(s), and Tampa could be the next, as they will address the issue in early 2021.

There are 18 members of the community on the advisory team. Among the first items that they are looking at is establishing a greenhouse gas “inventory” of city operations.

“What is Tampa City Hall and the old Municipal Office building? What type of energy hogs are they, right?” asks Remer. “We’ve got an energy footprint here as a municipal operation, and we want to lead by example. And so understanding the electricity use and where there’s efficiencies that can be made here within the city’s operations is our first and primary goal.”

The advisory team’s mission includes helping the Castor administration on implementing the Tampa Resilience Roadmap and to assist with the city’s first-ever Climate Action and Equity plan.

Advisory team member Walter Smith says his work as an environmental engineer has been geared around looking at the effect that bad environmental policies have had on front-line communities.

“This is very, very serious,” he adds. “This is an opportunity for us to change the face of Tampa for real by looking at these communities and working with the people of our frontline communities to make that big difference.”

Also named to the advisory team is Tampa Democratic Congresswoman Kathy Castor, who chairs the House Select Committee on the Climate Crisis.

“On this task force, I intend to offer ideas based upon what I’ve learned as Chair of the House Select Committee on the climate crisis and the major climate crisis action plan released this year to rave reviews,” Castor wrote to Spectrum Bay News 9. “I intend to listen to our neighbors and pay special attention to neighborhoods and people who are bearing the brunt of extreme heat and pollution.”

While there may be Tampa residents who question the seriousness of the issue, Remer says every local resident should be able to understand that the city needs to recognize the risks that a changing climate has on the city’s infrastructure.

“So yes, that means addressing flooding issues, because we have more intense and frequent rainstorms,” he says. “It means reassessing our sea walls to better withstand the impacts of strong waves that are brought on shore by tropical storms and increasing hurricanes. It means sometimes just replacing old infrastructure with a vision towards the future. We’ve got pipes here that are 100 years old. That’s expensive and it’s inefficient to operate.”

The Castor administration and city council addressed the issue of aging infrastructure in part by approving the nearly $3 billion PIPES (Progressive Infrastructure Planning to Ensure Sustainability) program in the fall of 2019.

“There’s a lot that the city can do, not only to ‘green up’ their operations, but to offer programs for the community, and then to be a leader in the region and in the state,” says Glickman.

The advisory team is scheduled to meet regularly over the next year “to help launch several initiatives designed to secure a more prosperous, equitable, and sustainable future for Tampa,” according to a press release issued by Castor spokesperson Ashley Bauman earlier this month.