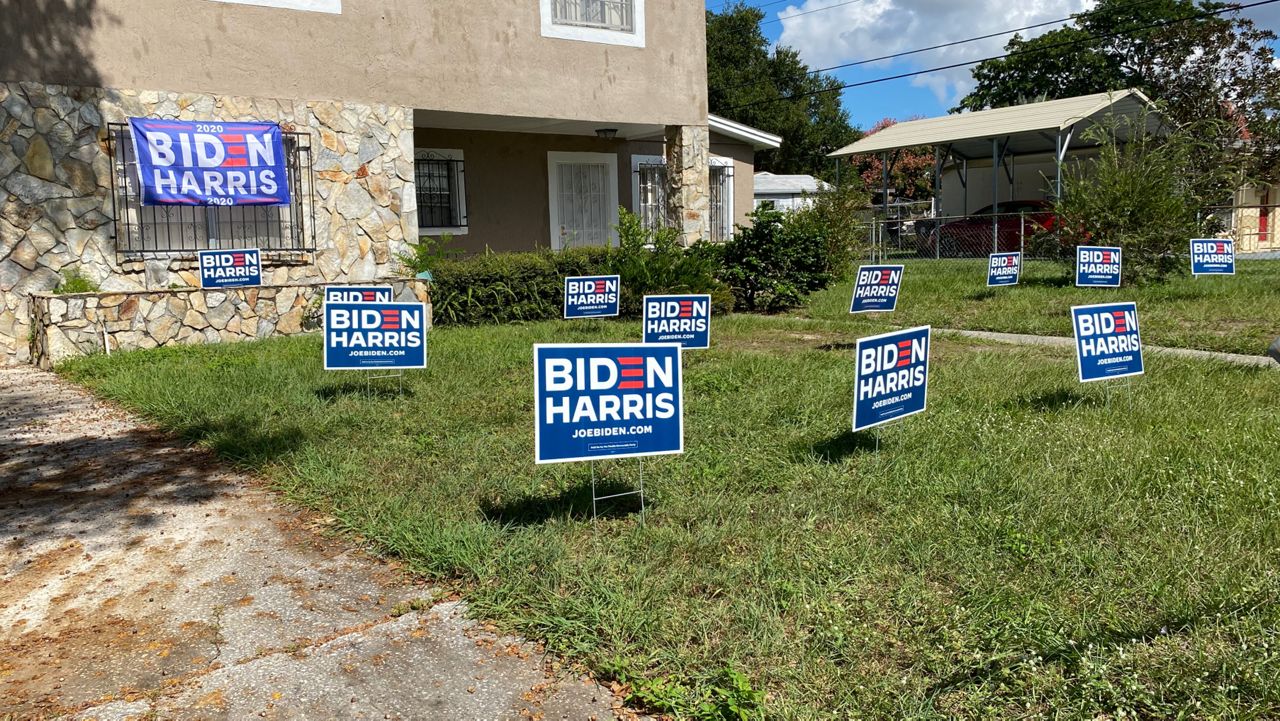 A 26-year-old man is accused of using a bulldozer to tear down Joe Biden signs. In one family's case, the signs have been replaced. (Ashonti Ford/Spectrum Bay News 9)

After Haines City police picked him up, authorities say he told them, "I've been drinking whiskey all day and don't remember what happened."

However, after some digging Spectrum News found the the Haines City police did not perform a sobriety test upon booking Blight because officers said he was not drunk. The Chief of Police, Jim Elensky, issued this statement:

“It’s absurd that a grown man could think he had the right to destroy someone else’s property based on a difference in political opinion. The fact that he was driving this heavy equipment, that he did not know how to operate, down busy roads could have been disastrous. We’re thankful that no one was hurt in this matter.”

Haines City Police Department said Blight is charged with trespassing on a construction site, grand theft and criminal mischief of $1,000 or more.

Adam Burgess, former vice mayor of Haines City says those charges are not enough adding that he was told Blight was only beiong charged for driving on a suspended license.

"What happened here was a hate crime and I will be following up," said Burgess.

According to Polk County's inmate search, Blight was still in custody on Monday.

HAINES CITY, Fla. - Former vice Mayor Adam Burgess told Spectrum Bay News 9 he is happy his grandmother wasn’t alive to see a man bulldoze over their property because of their political choice.

“This man came onto my property, took the two Joe Biden signs I had in my yard and them came back with a bulldozer to run down my fence,” explained Burgess.

Haines City police say 26-year-old James Blight stole a bulldozer from a construction site and proceeded to ride through Haines City, tearing down Biden signs and even running down a city own speed limit sign.

“Why bring that to our neighborhood,” asked Burgess. “This is a predominantly Black neighborhood and you’re coming over here with that? That’s not right.”

With Election Day just days away, tensions are high and people are extremely vocal about who they feel should govern our country for the next four years. There have been multiple complaints of both Trump and Biden signs being lifted from private property.

However, Burgess had proof; providing Spectrum Bay News 9 with photos of Blight in the bulldozer with Biden signs inside the lift.

“To come into our community and destroy property - it speaks to the dog whistles that Donald Trump has been putting out his whole campaign. Stand back and stand by and we have guys in bulldozers doing this. What does the president have to say about that?”

Cornelius Marion also spoke to Spectrum Bay News 9 about what Burgess is calling a hate crime.

“I thought somebody was coming to bulldoze down the house but I knew that couldn’t be right,” explained Marion. “So, I called the police.”

After Blight tore down the fence, Marion said he hopped in his car to follow him.

“What does the President have to say about this?” Haines City resident upset about destroyed property after @realDonaldTrump supporter tore down his fence to take @JoeBiden sign from his yard. Full story on @BN9 pic.twitter.com/6agYf6E6OZ

“He stopped traffic and cussed everybody out,” he explained. “There were four signs on H Street, he took the front loader and dug them up.”

Blight was charged with grand theft auto and trespassing on the construction site from where he is accused of stealing the bulldozer. Haines City police say that Blight claimed to be drunk at the time and not able to remember what he did.”

“There needs to be more punishment,” said Burgess. “This was a hate crime.”

Burgess told Spectrum Bay News 9 that he plans to continue to press the issue to defend what he says is his freedom to vote for whichever candidate he chooses. 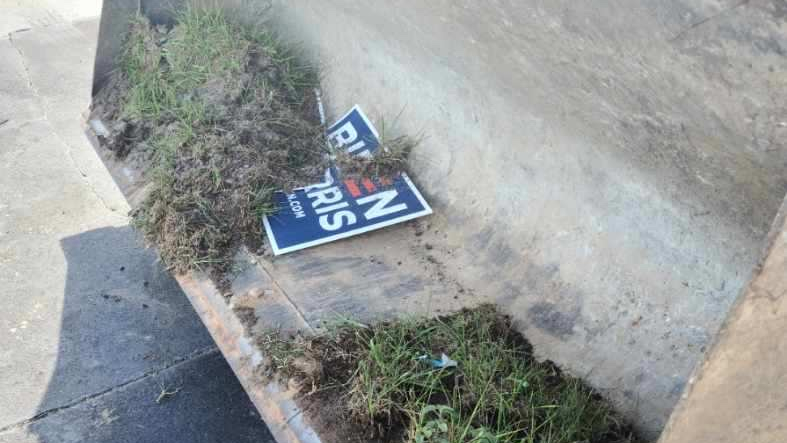 Authorities say this was the bulldozer that was stolen and used to damage political signs.