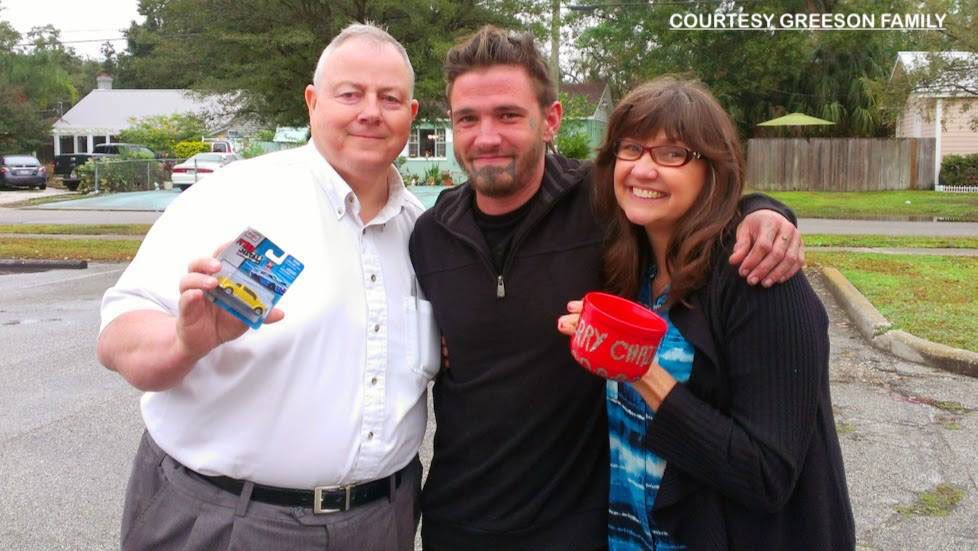 A very personal decision by Dori and Gene Greeson to reach out and forgive their son's murderer was featured on the Netflix series "I Am a Killer."

1 of 5
A very personal decision by Dori and Gene Greeson to reach out and forgive their son's murderer was featured on the Netflix series "I Am a Killer." They are now further sharing their story of forgiveness.
(Gresson family) 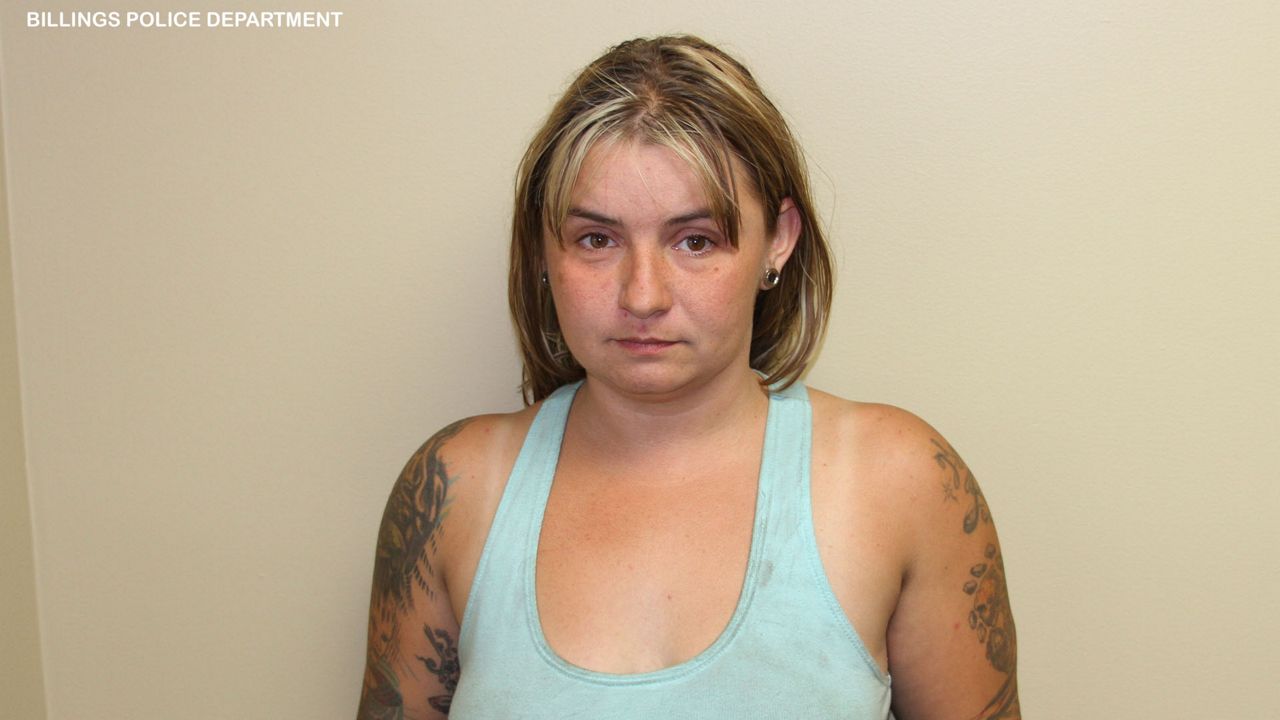 2 of 5
A booking photo of Lindsay Haugen after she was arrested for the murder of Robby Mast.
(Billings Police Department) 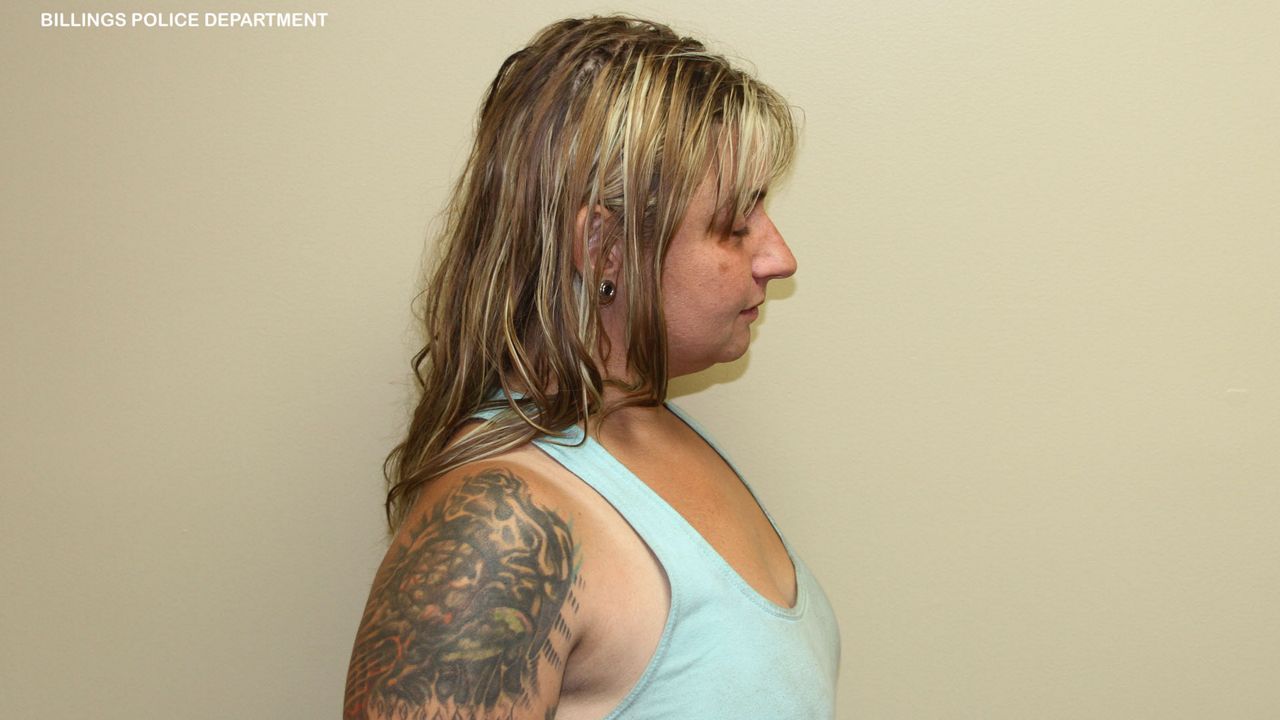 3 of 5
A booking photo of Lindsay Haugen after she was arrested for the murder of Robby Mast.
(Billings Police Department) 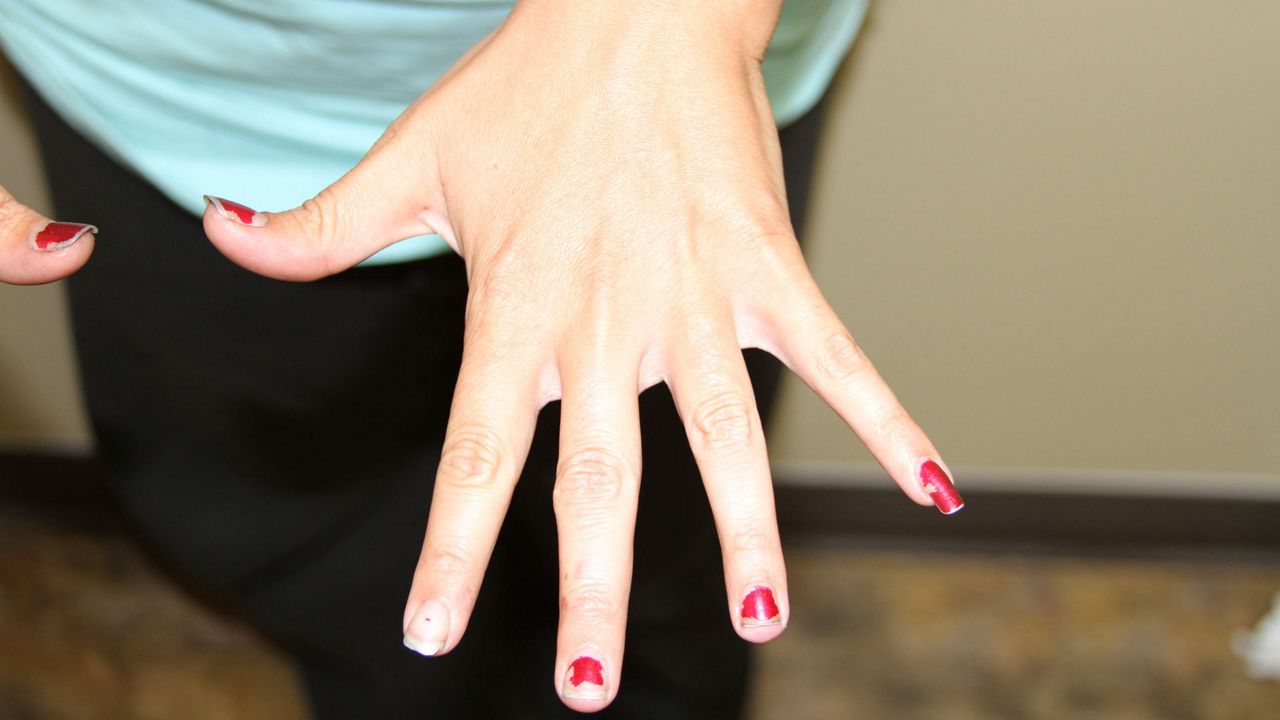 4 of 5
A booking photo of Lindsay Haugen after she was arrested for the murder of Robby Mast.
(Billings Police Department) 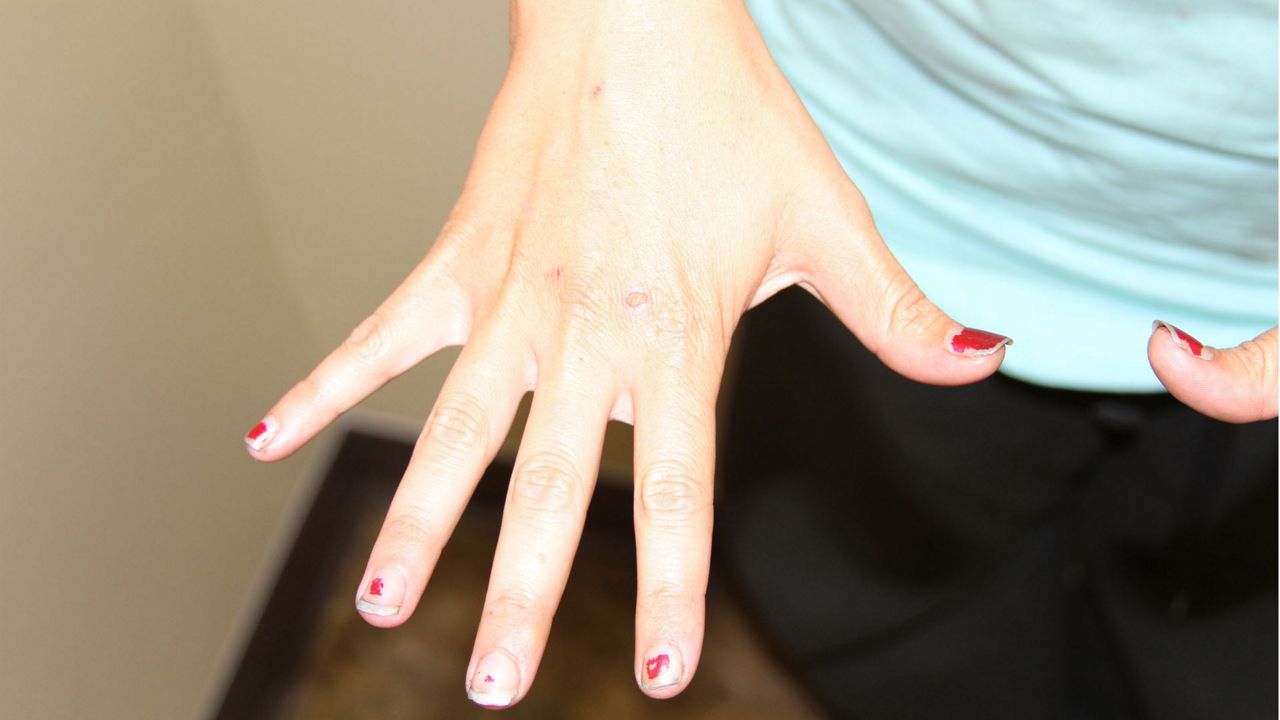 5 of 5
A booking photo of Lindsay Haugen after she was arrested for the murder of Robby Mast.
(Billings Police Department)

EXCLUSIVE: "I Am a Killer" — The Story of Forgiveness

PINELLAS COUNTY, Fla. — Could you forgive someone who killed your child?

A very personal decision by a Pinellas County couple to reach out and forgive their son's murderer was featured on the Netflix series "I Am a Killer."

Now Dori and Gene Greeson want to further share their story of forgiveness.

Lindsay and Robby met while Robby, who is from Pinellas County, was living the life of a traveler. They dated less than one month and hit the road together.

Lindsay said Robby was suicidal and wanted to die. She said she loved him so much, she offered to help.

“I explained to him that I could just place him in a chokehold until he was unconscious and then, just end his life,” Haugen told Spectrum Bay News 9’s Melissa Eichman in an interview from Montana Women’s Prison. 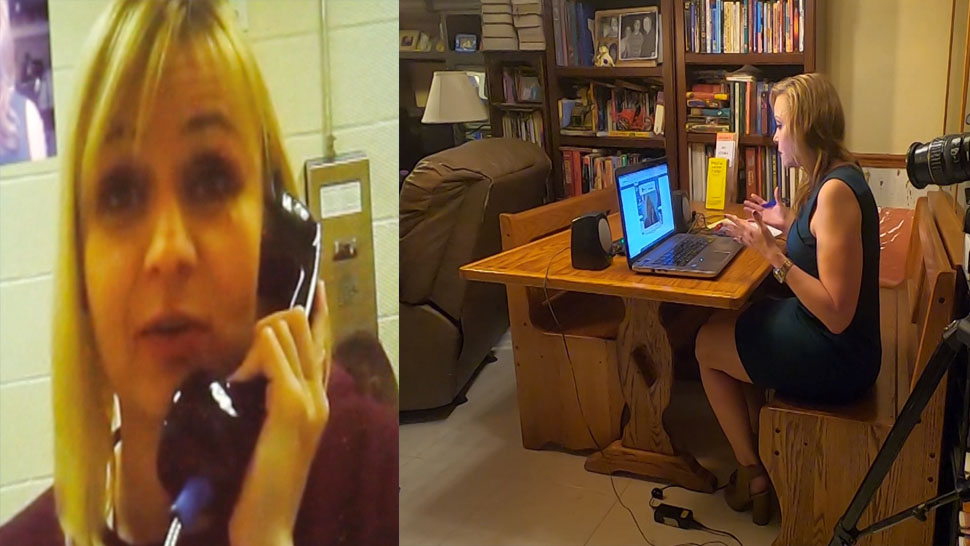 Detective Steven Hallam who worked the case in Billings, Montana, is not convinced it was a mercy killing.

“He asked her to kill him? I don’t believe that one bit,” said Detective Hallam who interviewed Lindsay after the murder.

“I kind of just wanted to kill somebody with my bare hands, honestly," Haugen told Detective Hallam during that interview.

“I think it was a combination of the demons she had been exposed to, for God knows how long. These thoughts of taking someone else’s life with her own bare hands,” Detective Hallam said.

The initial call came into Billings Police as a drunk driving case. Police reports detail what one witness told officers, describing what they saw in the WalMart parking lot. 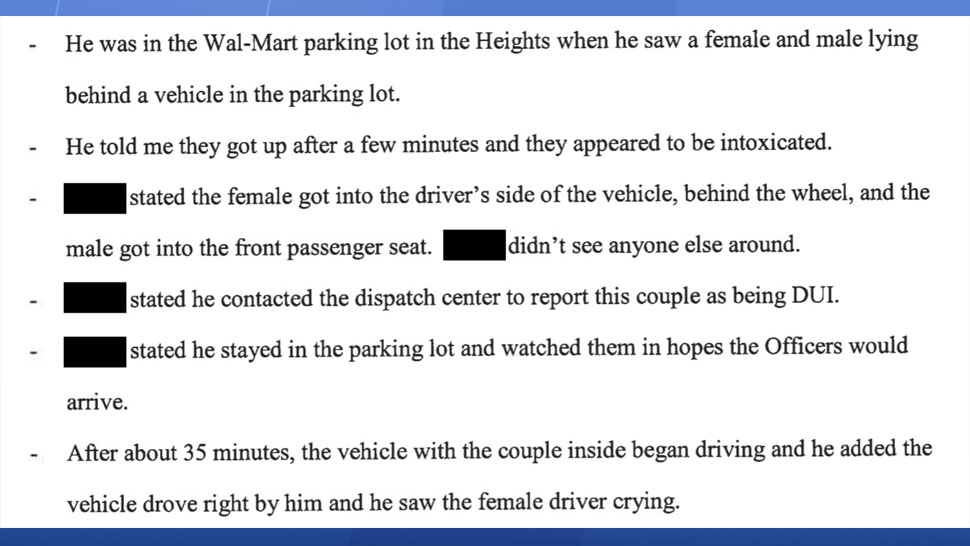 Friends and family of Robby Mast told police during the investigation they questioned Lindsay’s confession.

Some call her a cold-blooded killer. 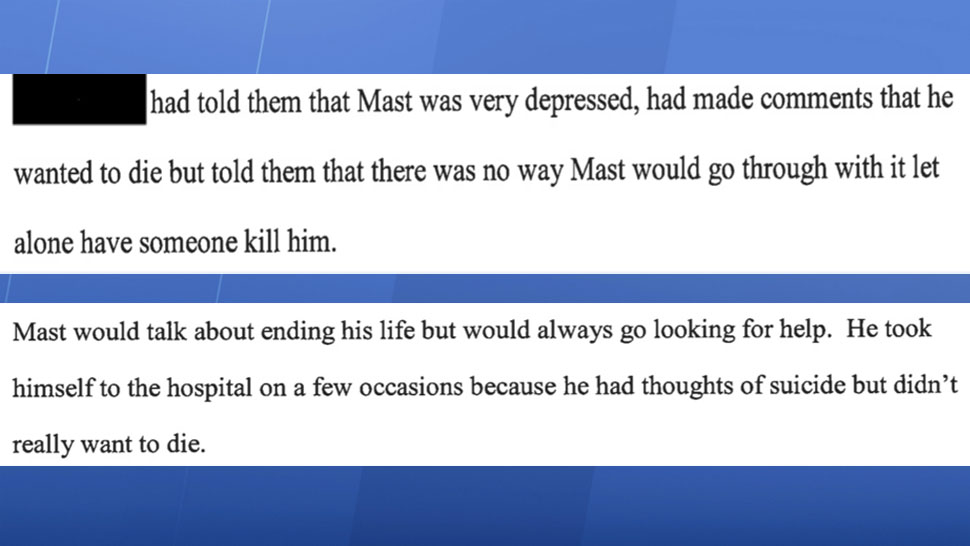 WHO WAS ROBBY MAST?

Robby was 25 years old when he died. The Greesons said he left home at age 18 and would hop freight trains, living as a transient who traveled across the country taking seasonal jobs.

Dori remembers her son as someone with a caring heart.

The Greesons were aware Robby struggled with substance abuse problems and knew he had been hurting.

“He was so depressed. He expressed that to us, he expressed to some of his friends that he just wanted to die at times — that’s how sad he was,” Dori said.

The last the couple heard before Robby’s murder was that he had entered a rehabilitation program, so they were hopeful. 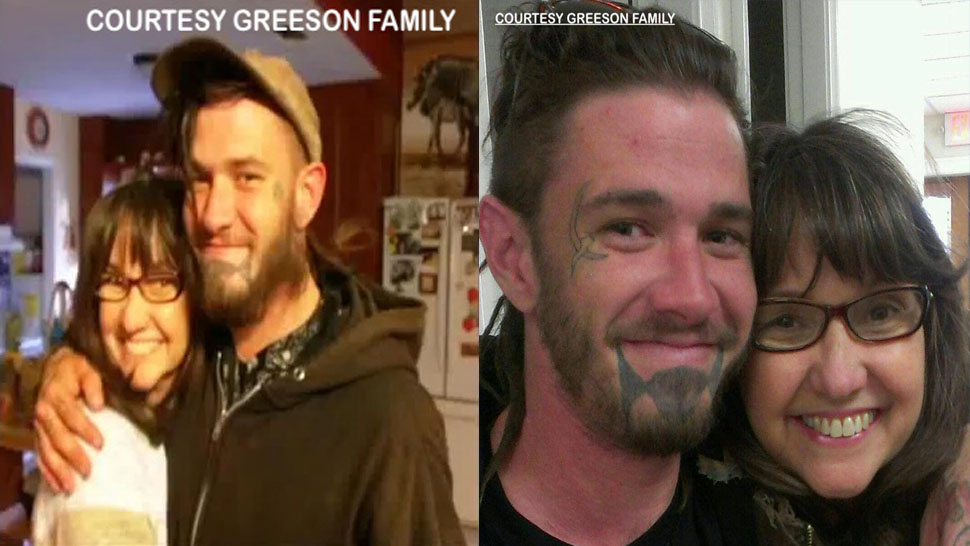 Then they learned Robby had been murdered.

Not knowing the answers to any of these questions, days later the Greesons decided to forgive the woman who killed Robby.

“I didn’t even know her. I just decided I wanted her to know I forgave her,” Dori said.

Lindsay, who previously served in the Army, said she knew she loved Robby. She said their relationship was intense and included a lot of drinking.

“I was convinced that I loved him after barely getting to know him,” she said.

Lindsay said Robby often talked about not wanting to live any longer. She said an abusive ex-boyfriend tried to choke her and she almost died, which is the same type of chokehold she used on Robby.

“He did not ask me directly to take his life, but he told me that that’s what he wanted and I told him that I would do anything for him,” Lindsay explained.

Dori and Gene stand by their faith and chose to forgive Lindsay. The couple said she has changed.

The Greesons both sent letters to Lindsay granting their forgiveness for that murder.

I would have normally begun the letter as I do most every letter I write, “Dear Lindsay,” but given the fact that I have not met you yet and for what you have done, you are certainly not dear to me, I abstained. You do not know me, or perhaps even who I am, so I will introduce myself. I am Robby’s stepfather……

I want you to know that I have forgiven you. I did that within a few days after learning of Robby’s death. (We did not learn about his death until the 17th.) I knew I had to forgive you because it would not have been healthy to harbor bitterness towards you.”

Words cannot express how much it means to me that you took the time to reach out. For the past 11 months, I have learned to express my sincere apology to you and everyone else in Robby’s family for the loss of such a beautiful soul. I met Robby one year ago yesterday, and to this day I remember being captivated by his warm smile at the very first sight of him. He has such a presence about him. Robby was a light wherever he went. I love Robby with all my heart, and when I made the decision to take his life, I caused the world a grave injustice. For those that knew Robby, I plucked the brightest star from the heavens, and for those who never met Robby, I stole their chance to have their lives enriched by knowing him.”

I have wanted to write you for a while but just haven't known what to say. I am glad you responded to Gene's letter. I wanted to ask you all kinds of questions and blast you with “Why, why, why did you kill my son.” After reading your words stating you loved Robby, I wanted to yell out, "If you loved him, why did you kill him?" Yes, those thoughts came to my mind, but Lindsay, I know there are no good answers that would satisfy me. From your letter to Gene, you did state you were in no position to help Robby because you too were on a destructive path. I read in the paper that you stated you wanted to know what it was like to kill someone with your own bare hands. That statement showed you were obviously on a dangerous path. I am glad now you are getting the help you need…..”

I am going to end this letter now because I want to get it in the mail tomorrow.

May God bless you,

Dori said she’s confident forgiveness is the best way for her to move forward.

Gene and Dori both work as prison ministers and never imagined it would turn personal. The couple hopes other people can learn to forgive people in their lives.

“If it helps anyone become a forgiver themselves, we know the peace it will give them, the joy, we want people to have the same joy we have,” said Gene.

Lindsay was surprised to receive the couple’s forgiveness.

“I expected anger and I expected hurt, but that letter was forgiveness and when I first read it, I had a hard time believing it,” Haugen said about their letters. “It blew me away and it changed the very essence of who I am.”

The letters of forgiveness were the first in what would become a growing stack of correspondence.

“We didn’t know anything would continue,” Dori said.

Love grew and the connection continued. The Greeson’s flew to Montana to visit Lindsay in prison in 2017.

“I always feel love for you, you know that. That has developed and it’s there and my forgiveness for you is there,” Dori told Lindsay as they embraced during that meeting.

In part two, an in-depth look into the relationship between the Greesons and Lindsay. It’s a relationship confusing for some to comprehend. That story airs Friday in the 5 o'clock hour.