Letter to Polk Teachers: Firing Possible if They Go to Tallahassee Rally

ORLANDO, Fla. — A Polk County school board member is alerting teachers that they could face firing if they attend a rally in Tallahassee Monday.

It's believed at least 1,000 Polk County teachers will go to the statewide rally for better funding for public schools and fair pay education employees on Monday at the Capitol building. The rally is taking place the day before the state of the annual Florida Legislative Session.

Polk County School Board member Billy Townsend posted the letter on his Facebook page Friday evening. The letter from the Florida Dept. of Education said the number of teachers planning to attend the rally could amount to an organized "failure to report for duty," and constitutes a strike, which is illegal under Florida law.

The letter goes on to say that employees who violate that strike provision may be fired. It also says that any organization (like a teachers union) that violates the strike provision can be fined up to $20,000 a day and have its bargaining agent certification revoked or suspended. 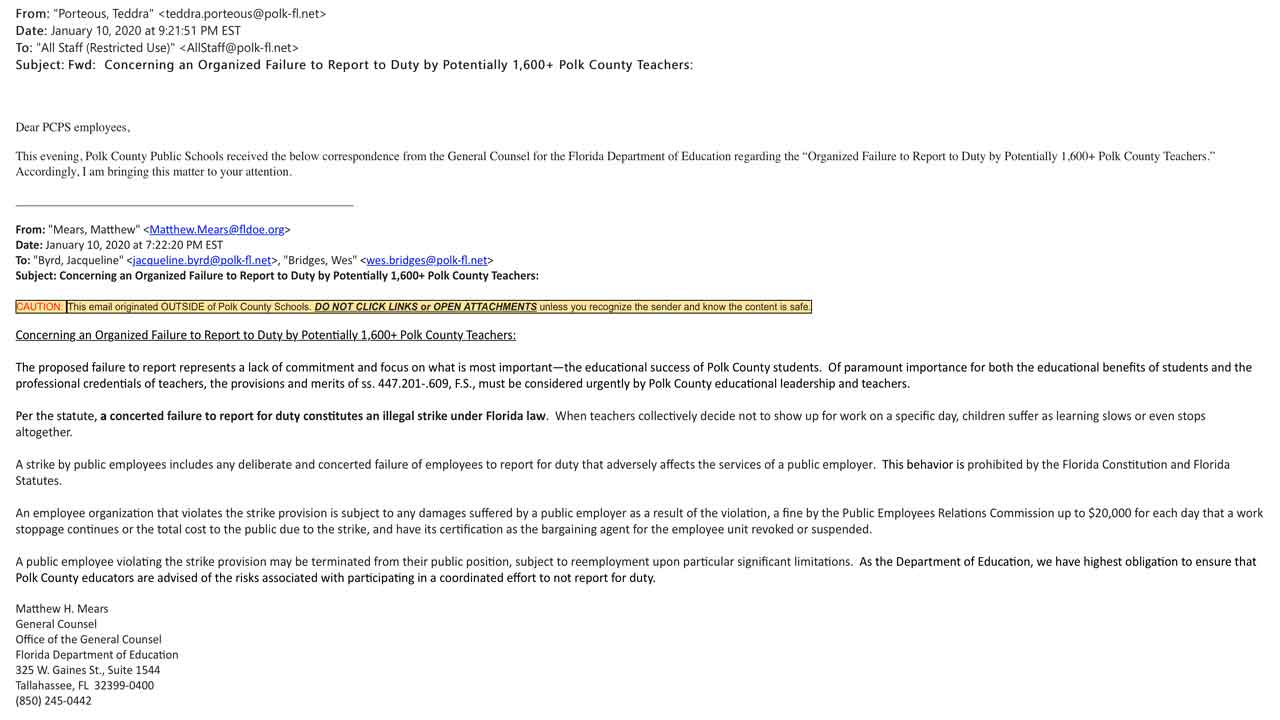 Screen shot showing email sent by attorney for Florida Department of Education stating that employees or an employee organization that violates the "strike provision" in Florida statutes could be subject to fines up to $20,000 per day.

A copy of the letter teachers received from the Polk County School District, provided to Spectrum News by a teacher, comes in an email that was forwarded to "All Staff" at 9:21 p.m. Friday night.

The district received the email around 7:22 p.m. Friday from Matthew Mears, an attorney in the Dept. of Education's Office of General Counsel.

"Everything about that email was a disaster"

Polk County teacher Branden Lane was one of the educators who received the email notifying him he could lose his job for attending the rally. He said some teachers are scared and some are angry, perceiving the email as a threat.

"To me this is just one more abuse by the Florida Department of Education, trying to threaten and bully their people into submission,” said Lane.

The Florida Dept. of Education told Spectrum News that Polk County was the only school district that got the email.

A spokesperson says that's because the school district's superintendent asked the state what the legal consequences could be if teachers leave school.

"DOE had a legal and ethical obligation to make sure teachers were aware of the law," the spokesperson said.

The agency also wants to make it clear that any firing of teachers would be up to the county, not the state.

Townsend told us he plans to ride with teachers to the rally. He added that he was not happy that he received the email at the same time that county teaching staff did.

“If this is a local decision, over my dead body will anybody be fired," he said. "Everything about that email was a disaster from the state level [to] the local level."

The teachers say they are using paid time off in order to attend the rally, and that the school district had advance notice of the rally.

Stephanie Yocum, president of the Polk Education Association, said 700 Polk County teachers still plan to attend the rally, and the union's attorneys are backing them to insure they don't face consequences for taking a personal day.

"We are using our first amendment right and our right to freely assemble to lobby our legislators for our kids,” said Yocum.

"We are at a crisis level"

Lane said the teachers are going to the rally to push for pay equity, higher pay, and a reduction in state testing.

“It comes down to we are at a crisis level when it comes to funding our schools," said Lane. “I think the reason why Polk has seen such a surge [in teachers attending the rally] is because we feel as though our district staff just isn't listening and I think teachers are fed up and I think it's time for Polk to pay attention to what their workers are saying."

School district spokeswoman Rachel Pleasant said they have a plan to put substitutes and district staff in classrooms on Monday. They planned for 1,300 teachers to be out as of Friday.

Pleasant added there would be an increased law enforcement presence on Polk school campuses.

We're checking with surrounding counties in Central Florida and the Tampa area, and so far none of them are running into the same issue with large numbers of teachers calling out Monday.

Many of the school districts tell Spectrum News that teachers are also not required to tell the district why they need the time off.