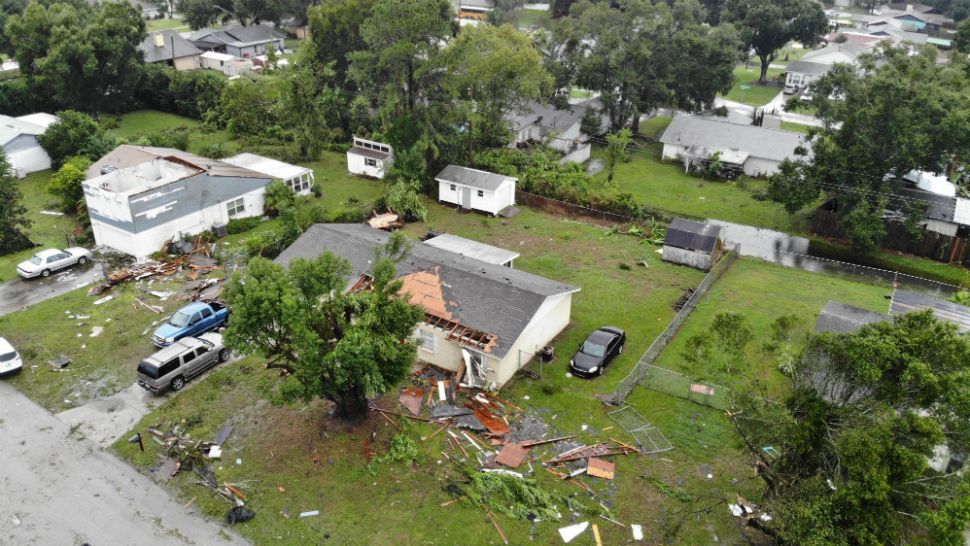 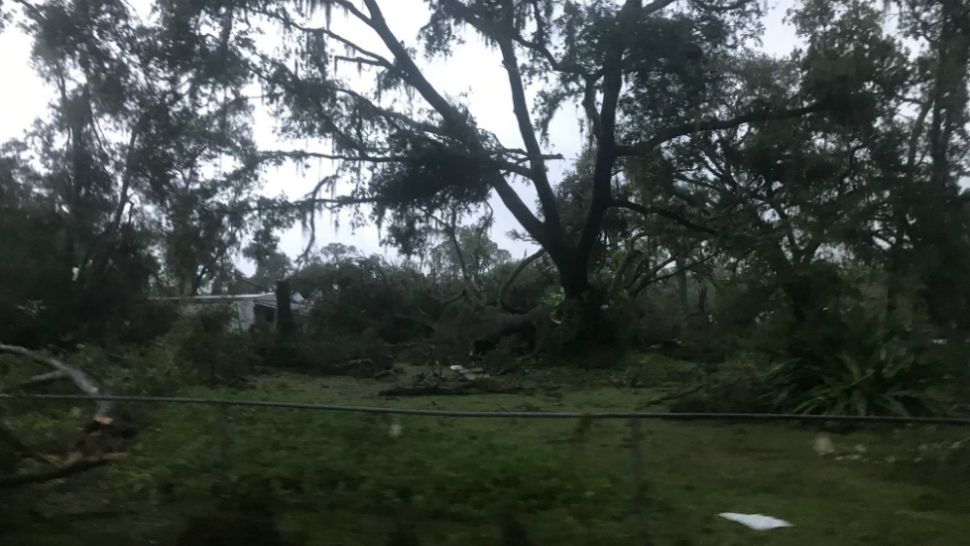 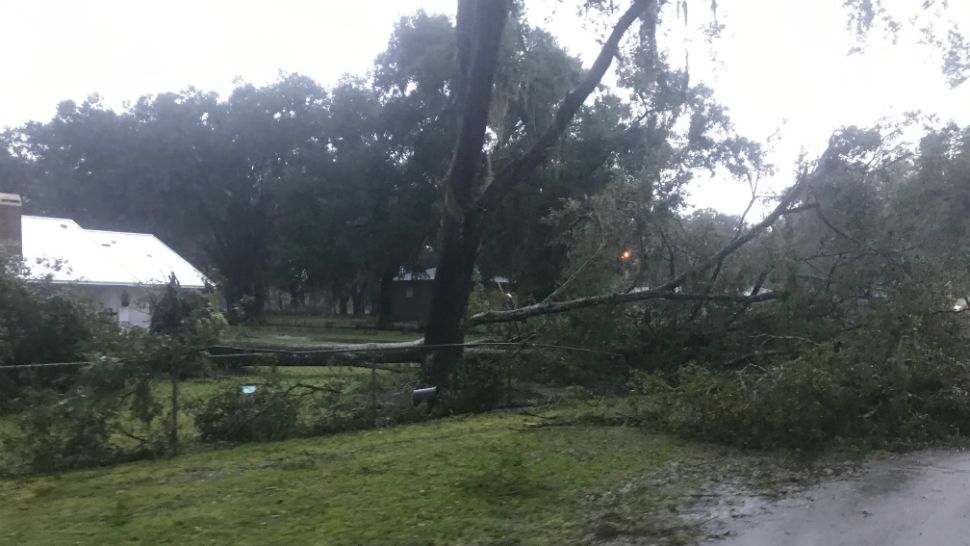 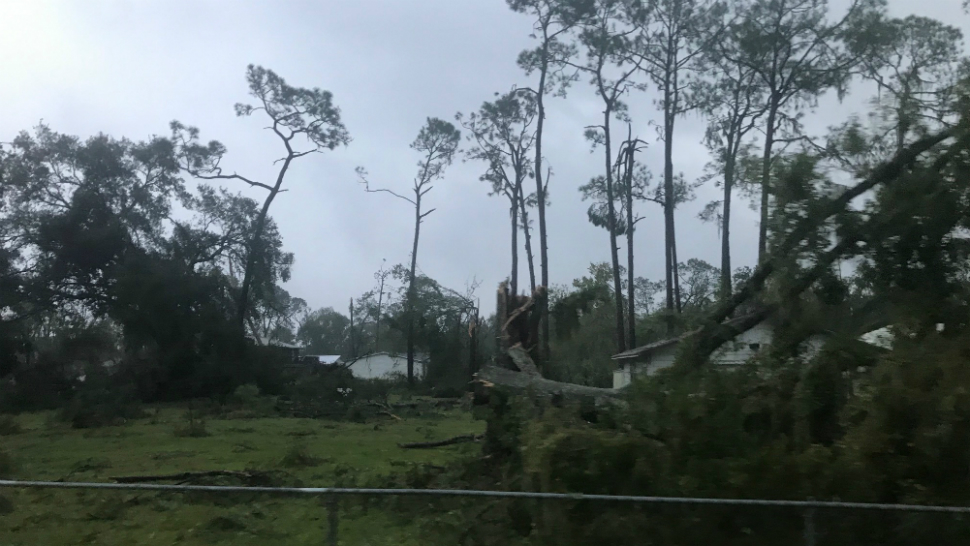 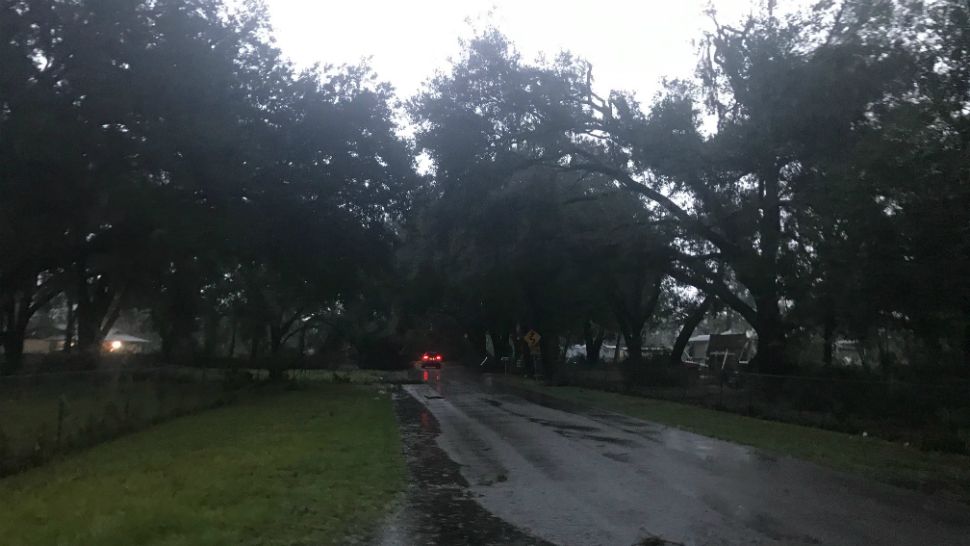 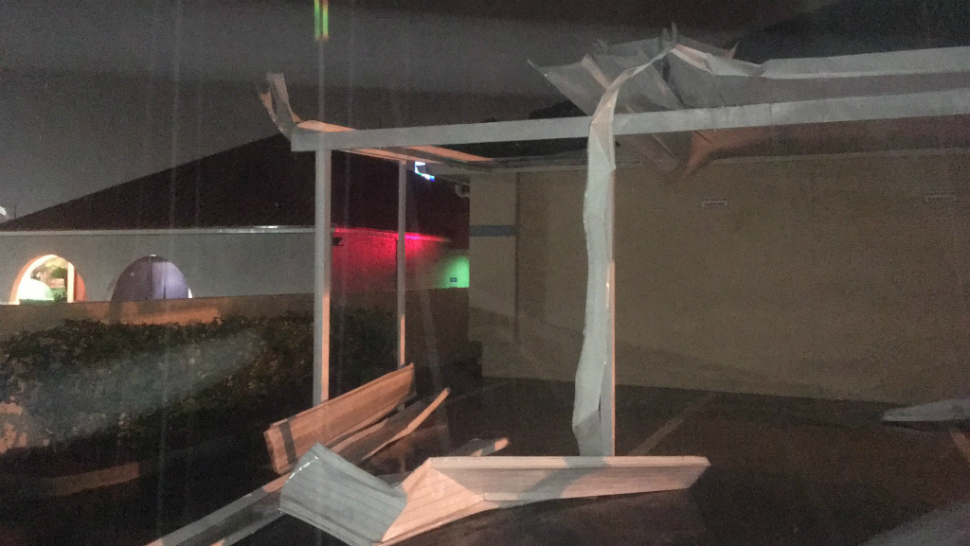 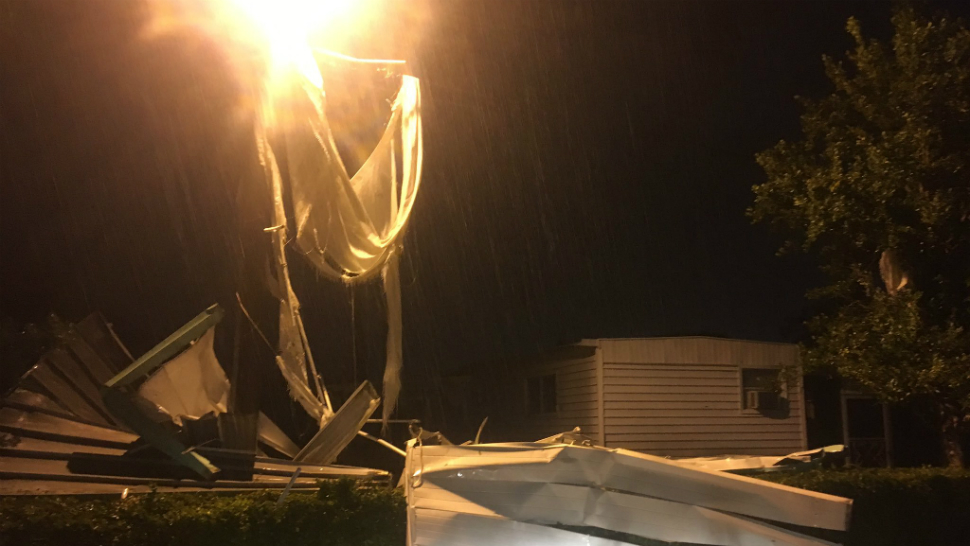 7 of 25
Bay area storm damage
There were about 2,000 customers without power in Seminole, with about 3,000 total in the county.
Sarah Blazonis/Spectrum Bay News 9 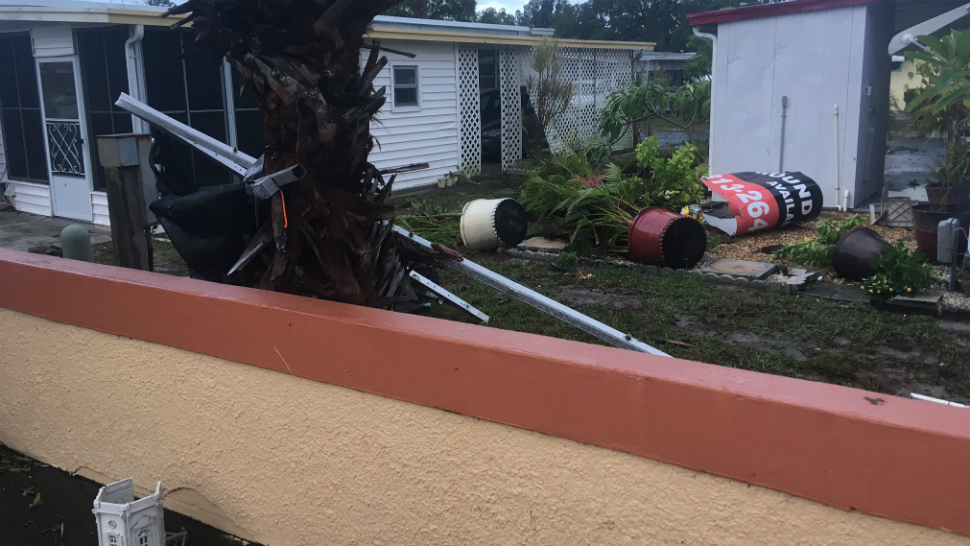 8 of 25
Bay area storm damage
As the sun came came up and the rain stopped we got a much better look at the damage at the Twelve Oaks Mobile Home Park in Seminole and a nearby business plaza.
Kim Leoffler/Spectrum Bay News 9 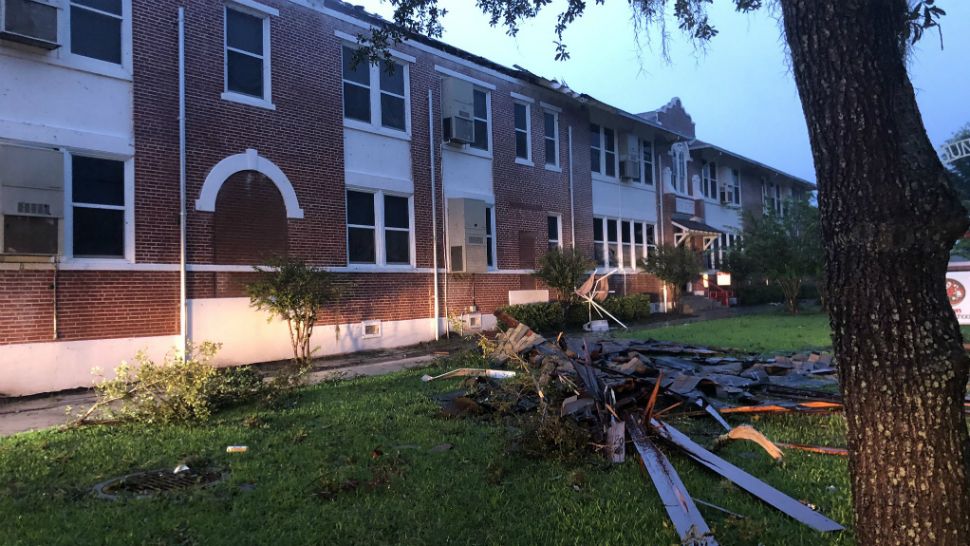 9 of 25
Bay area storm damage
As the sun came came up and the rain stopped we got a much better look at the damage at the Twelve Oaks Mobile Home Park in Seminole and a nearby business plaza.
Kim Leoffler/Spectrum Bay News 9 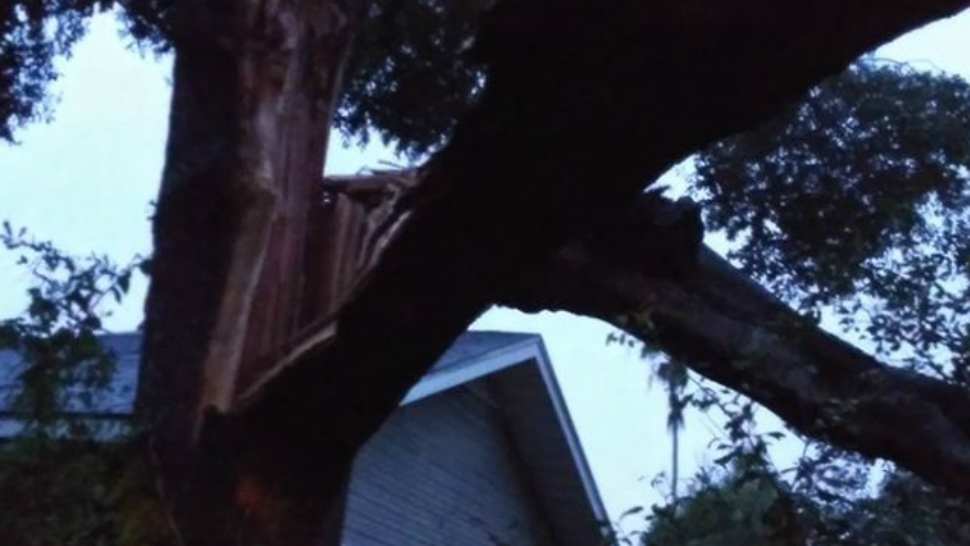 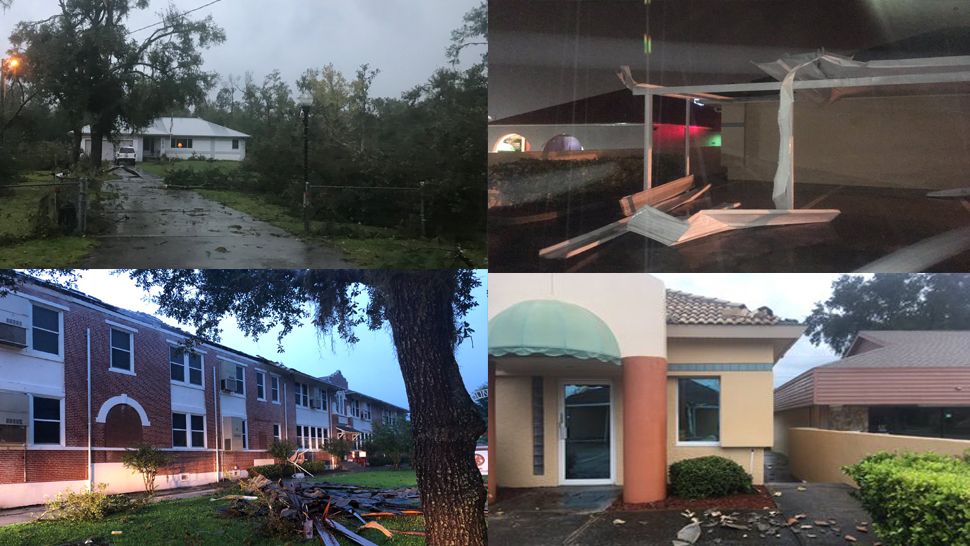 11 of 25
Bay area storm damage
By Saturday afternoon, conditions will begin to dry out. There will still be a few showers leftover but the frequency will decrease and the threat for tornadoes will end. 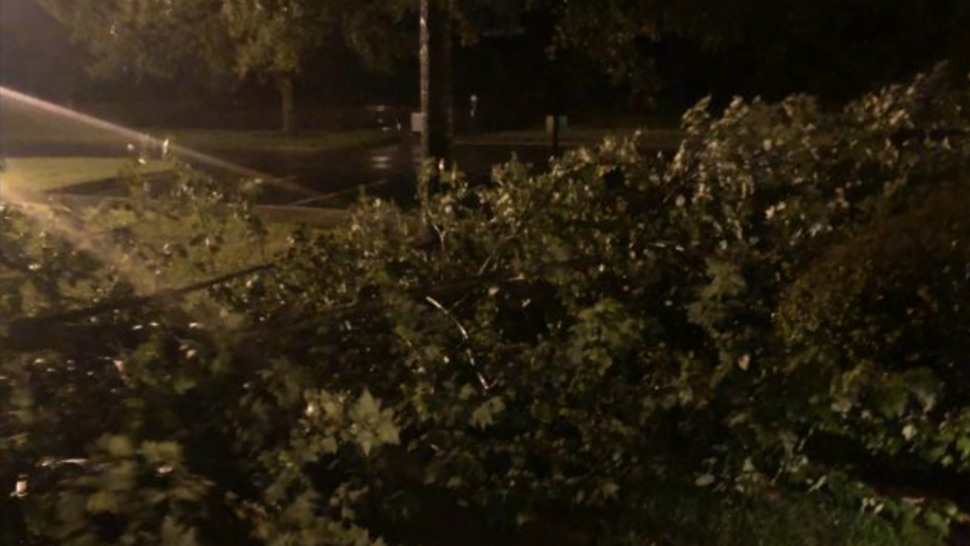 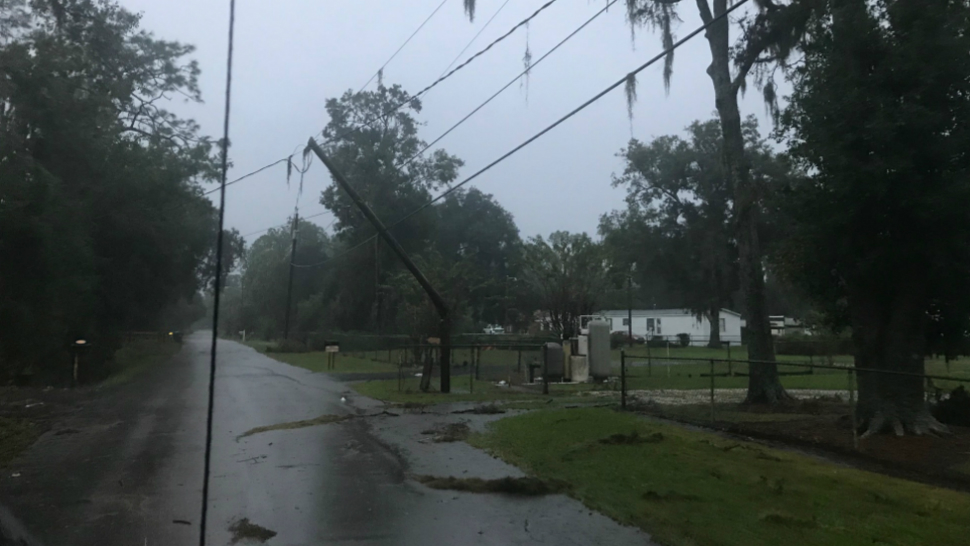 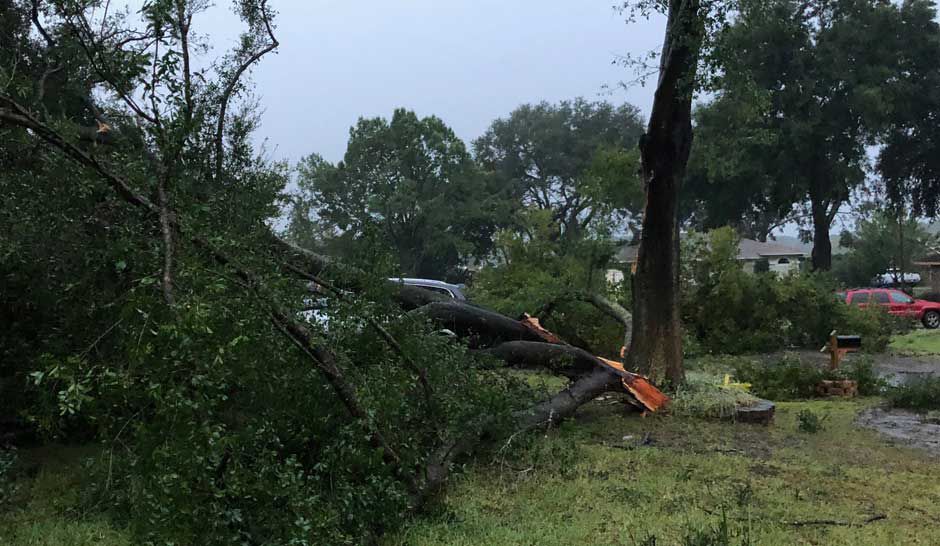 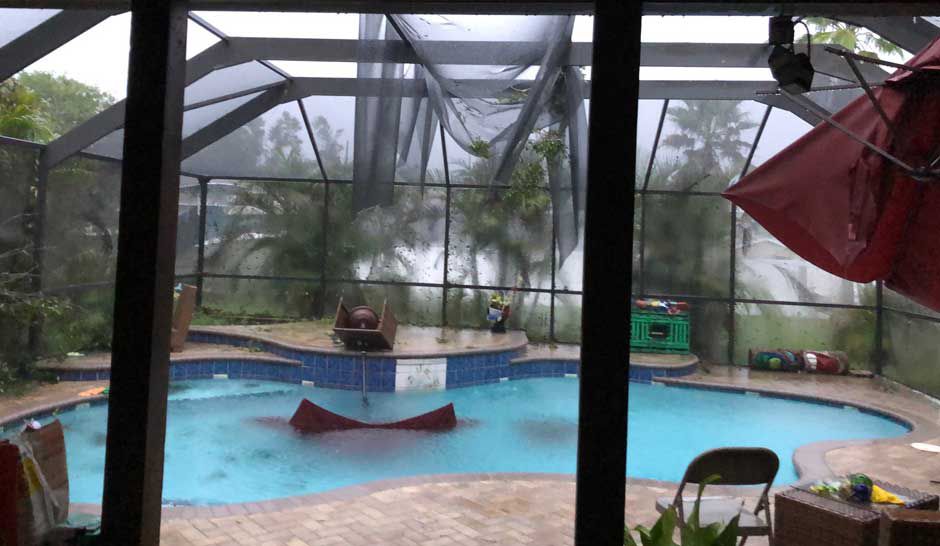 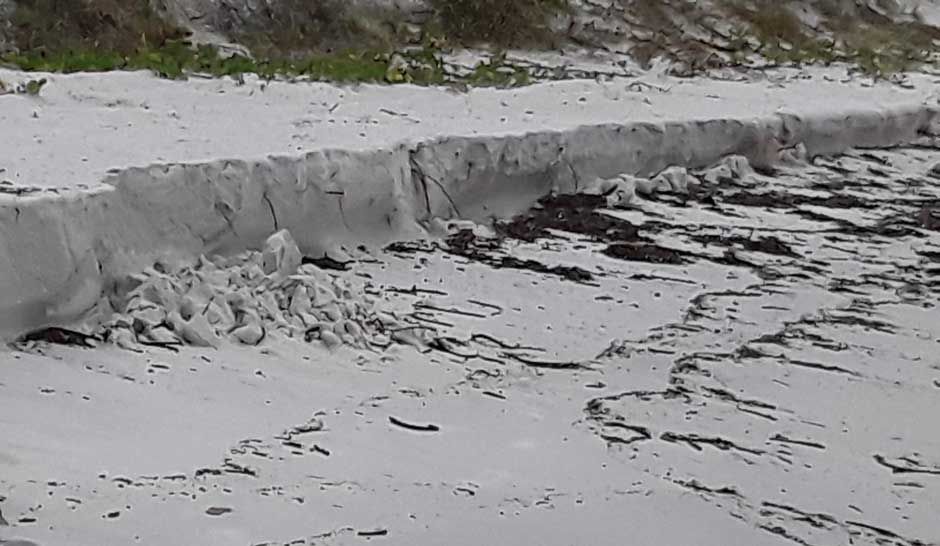 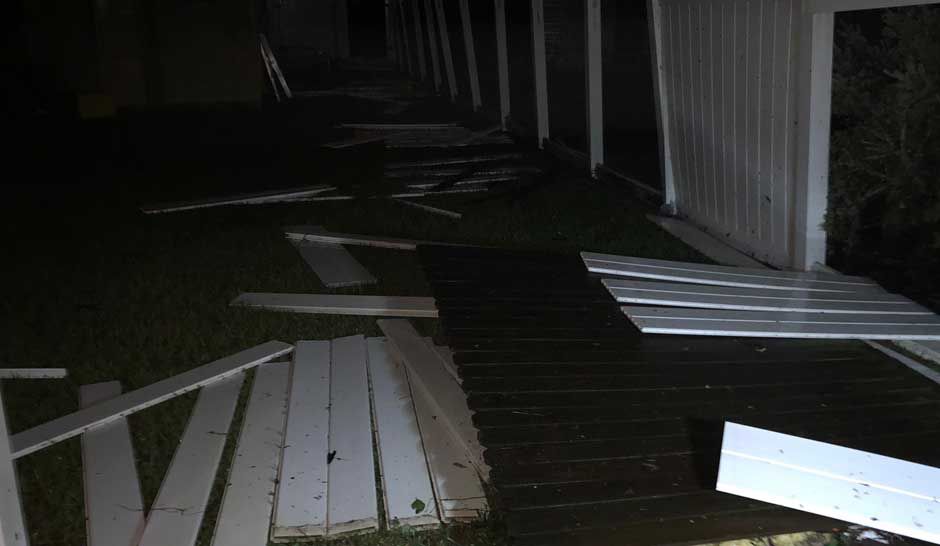 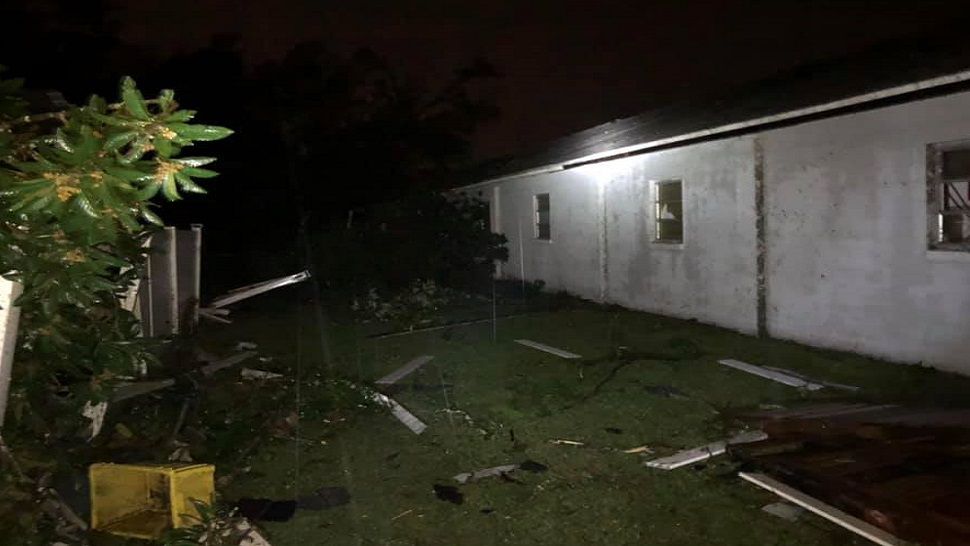 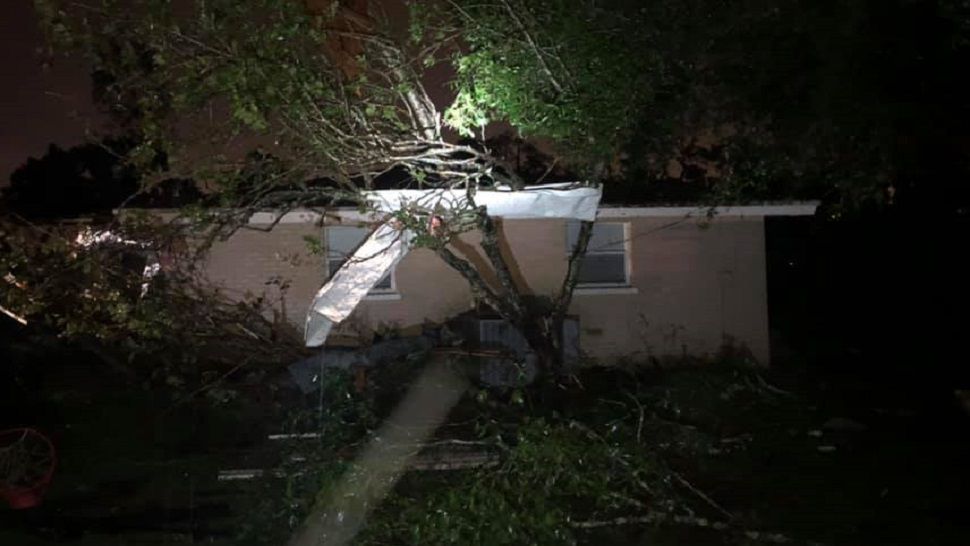 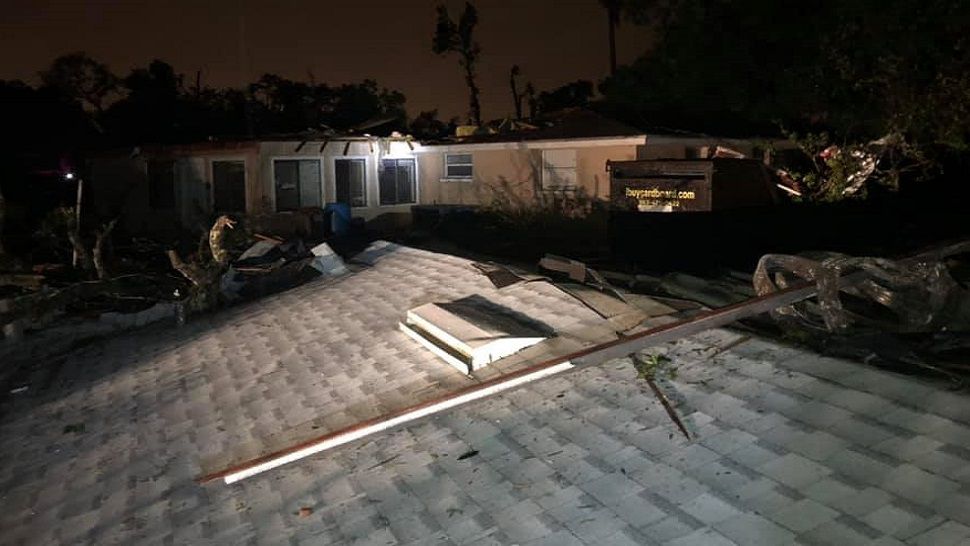 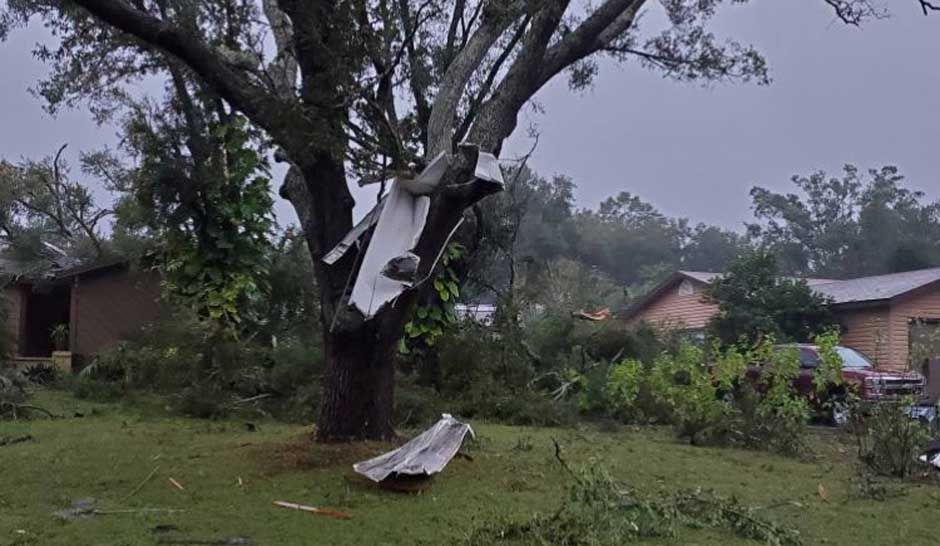 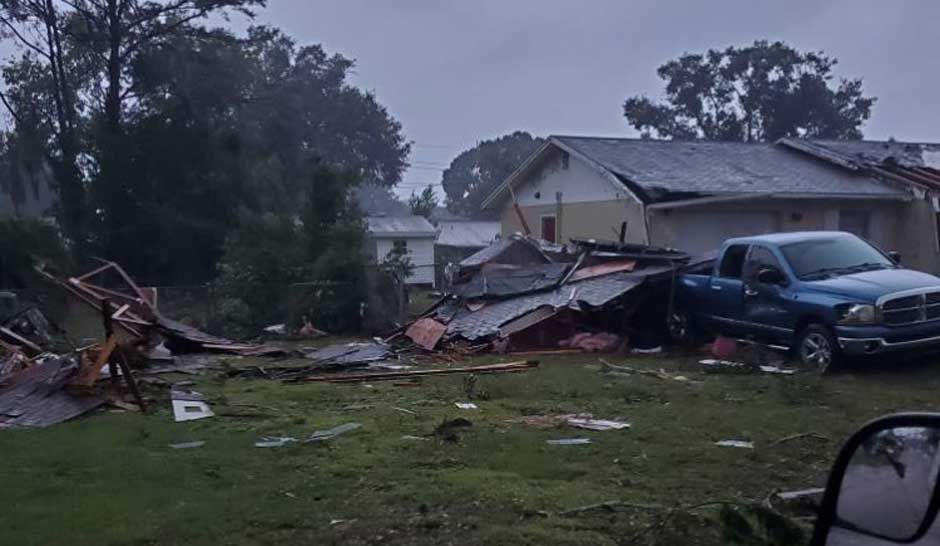 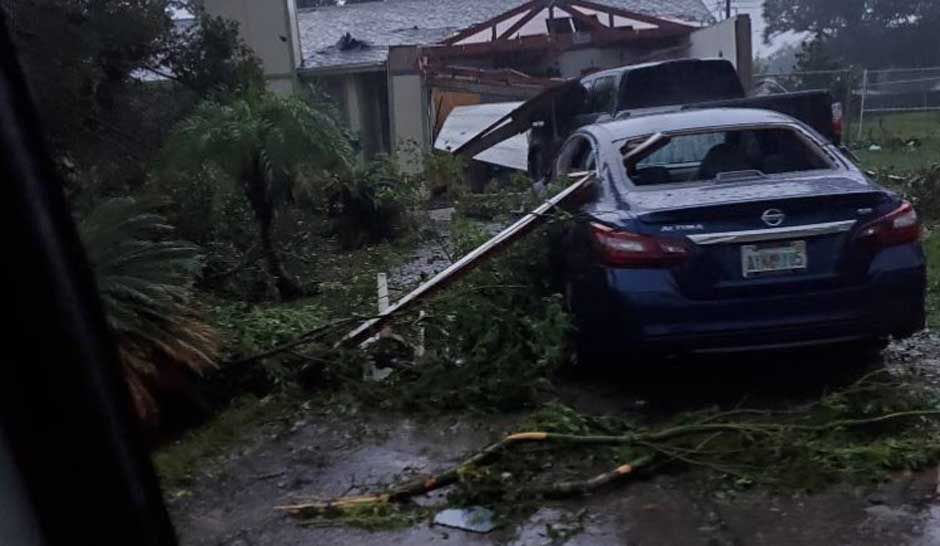 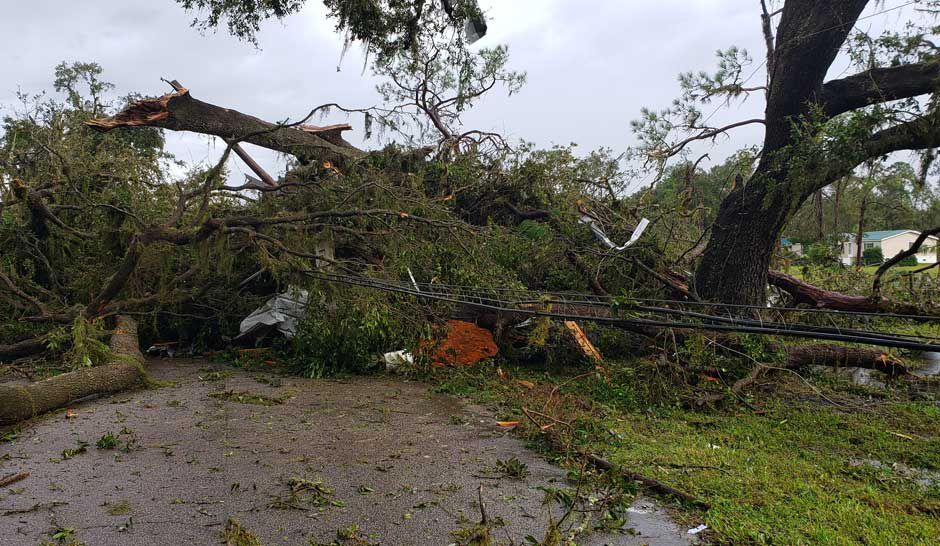 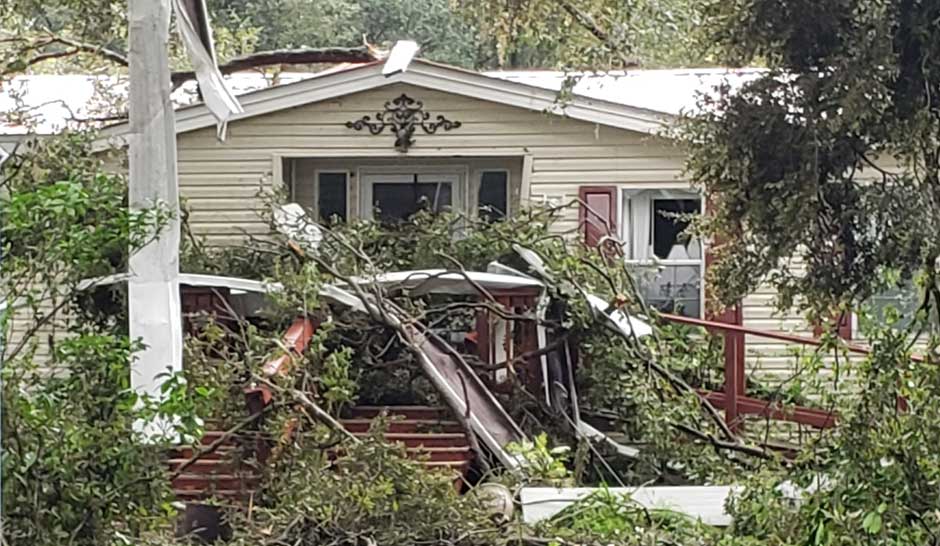 The tornado was one of two that hit the Tampa Bay area as storms from the east side of Tropical Storm Nestor blew over the Florida peninsula.

The tornado's peak winds were around 120 mph, and it cut a swath of damage that lasted 9 miles, forecasters said in a preliminary assessment of the damage in the area, which stretched between Hillsborough and Polk counties.

A total of 50 homes were damaged.

At one point, almost 10,000 Lakeland Electric customers were without power from the storms and the tornado, which first touched down in east Hillsborough County at about 10:30 p.m. Saturday and traveled north across Interstate 4 and into Kathleen in Polk County.

The tornado ripped off part of the roof of Kathleen Middle School, where classes were canceled Monday and Tuesday, Polk County Schools said.

Strong winds overturned a tractor-trailer on westbound I-4 at Polk Parkway at about 11 p.m., according to a Florida Highway Patrol crash report. The semi fell on a Lexus SUV, and debris from the wreck damaged two other cars. The interstate was snarled for hours, with one lane of traffic getting through, as crews worked to clear the crash. No injuries were reported.

The storm then moved into Mount Tabor, damaging homes and a church before it lifted off.

Some photos of damage in Kathleen near Duff Rd. And of course, it includes siding in a tree. @BN9 @bn9weather #BN9Polk #Nestor pic.twitter.com/anJNcYDJe6

"I heard a loud noise like a freight train was coming through, and before knew it, all devil broke loose. Things were flying around the backyard. I heard a crash and a tree hit the house," said Richard Smith, whose Kathleen-area home was struck by a tree.

For much of the day, residents were without power, while dealing with cracked windows and windshields, dented cars, and debris in backyards and on rooftops.

"My daughter had just walked out of her room, and a tree came right in over her head, just as she walked out," said Lori Wilkins, who lives in the Ashley Pointe neighborhood just north of Kathleen.

"It reminds me back of Irma but worse, because we didn’t have any structural damage at all then but some roof shingles," Jere Holbrook said.

Frances Palermo was asleep when the tornado hit. The noise woke her up.

She got her father out of the guestroom just before her fence came flying through the window. Palermo, a native of Puerto Rico, said she had no idea what was going on at the time.

The roof of her home was damaged, along with her kids' playhouse and a trampoline. Two miles down the road, Kathleen Middle School was extensively damaged.

"All three floors are damaged. Computer labs are damaged. Everything that’s in there is going to be trashed," Polk County Schools Superintendent Jacqueline Byrd said.

According to initial law enforcement reports, there have been no serious injuries reported to the Sheriff's Office or Polk County Fire Rescue.

As the sun is coming up and the rain is stopping we’re getting a much better look at the damage at the Twelve Oaks Mobile Home Park in Seminole and nearby business plaza from a confirmed EF0 tornado overnight. @BN9 BN9 @bn9weather pic.twitter.com/BAqseoyuhr

Deputies remained on scene where there were power lines down until Lakeland Electric could arrive and fix the downed lines as well as restore power. Orlando Utilities Commission crews were sent to help Lakeland crews.

The tornado is the second EF-2 tornado produced by a tropical system in northern Polk County in recent years. Hurricane Irma also produced a EF-2 near Polk City in 2017 that did major damage, according to Spectrum News Chief Meteorologist Mike Clay.

As many as 3,000 Duke Energy customers were without power Saturday.

Take a look at this-- a driver getting caught by tornado debris on I-4 near Lakeland. #FLwx pic.twitter.com/S4PjoJ888g

Tornado warnings were in effect for much of Friday night, and tornado watches remained in effect until noon Saturday. A watch means tornadoes are possible in and near the area where it has been issued. A warning means a tornado has been sighted or indicated by weather radar and that there is imminent danger.

The worst of the weather happened east of Tropical Storm Nestor, which became the 16th named storm of the 2019 Atlantic stormseason on Friday afternoon.

SE Paradise Pt. in the Kings Bay Area of #CrystalRiver. This is the most flooding we’ve found after visiting several flood prone spots in the area. Water is about ankle deep. One man familiar with the neighborhood tells me this isn’t bad for this spot. @BN9 #bn9citrus pic.twitter.com/2VZeZMJFXV

Live Updates From our Field Crews

We will provide continuous updates and live reports on our social media sites. Our team of reporters and Weather Experts meteorologists will bring you live reports and timely updates throughout the storm.

We will provide continuous updates and live reports on our social media sites. Our team of reporters and Weather Experts meteorologists will bring you live reports and timely updates throughout the storm.

Download the Spectrum News 13 mobile app for Safety Net alerts, interactive radar, and storm updates. Get it in the App Store or Google Play.