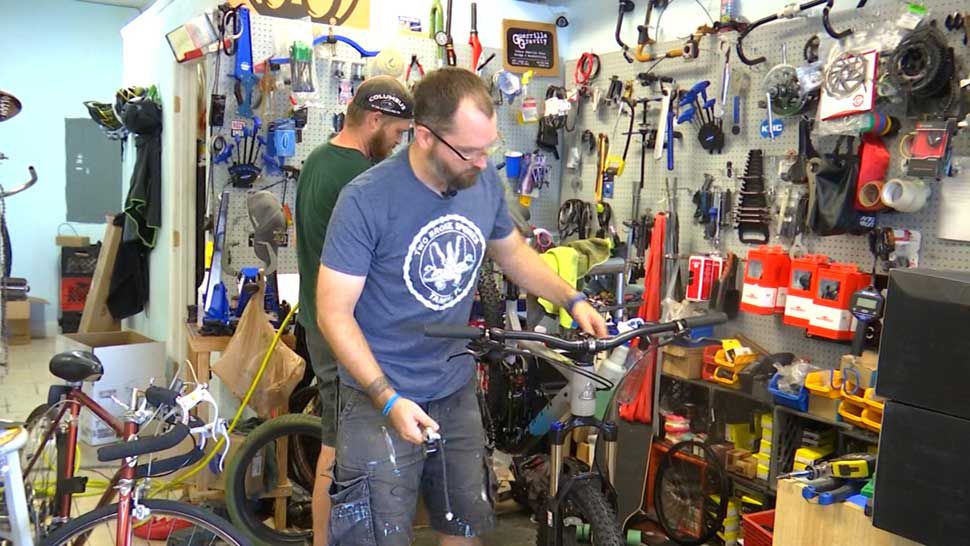 Geoff Hewett, co-owner of Two Broke Spokes bike shop in Tampa, works on a bike in his shop. Hewett says the trade war between the U.S. and China has already had an effect on his business, with the tariffs affecting the cost of some bike parts sold in the shop that come from China. (Ashley Paul/Spectrum Bay News 9)

TAMPA, Fla. — As the trade war between the United States and China continues and tariffs on an expanded range of Chinese imports are set to go into effect on September 1, one Tampa business owner says he's already had to raise prices, passing the spending burden on to consumers.

Geoff Hewett, co-owner of Two Broke Spokes, has spent more than 20 years repairing and selling them.

He says he’s seen prices rise, just like they have for everything compared to 20 years ago.

But the last two years have been different.

Most of the bikes they sell are not imported from China, so Hewett says they are lucky in that sense.

But many of the parts they use do come from China, forcing them to raise some prices.

He wouldn’t say if he’s concerned for the future, but he did say this isn’t fair to the people who depend on bikes for transportation.

The tariffs are set to hit on September 1, followed by another wave in mid-December.

What exactly will be affected on Sept. 1?

We spoke to Professor Michael Coon at the University of Tampa about what goods will be affected when the new tariffs go into effect on September 1.

It's a long list - 122 pages of items, and it's more than just raw materials used to make goods this time.

"So if you look here, you'll see footwear and outer soles, so these are going to be shoes that are already manufactured, and the tariffs will vary by different price points," Coon said as we looked at the list.

What exactly does that mean for American families and household budgets?

"Most of these goods in here will be finished products, so the burden is going to be much more on average households," Coon explained.

In fact, Coon says this wave of tariffs will cost the average household $1,000 per year on anything from food to clothing to appliances to bikes.

Right now, there doesn't seem to be an end in sight for the trade war. Coon said he believes Congress will need to intervene for it to finally come to an end.