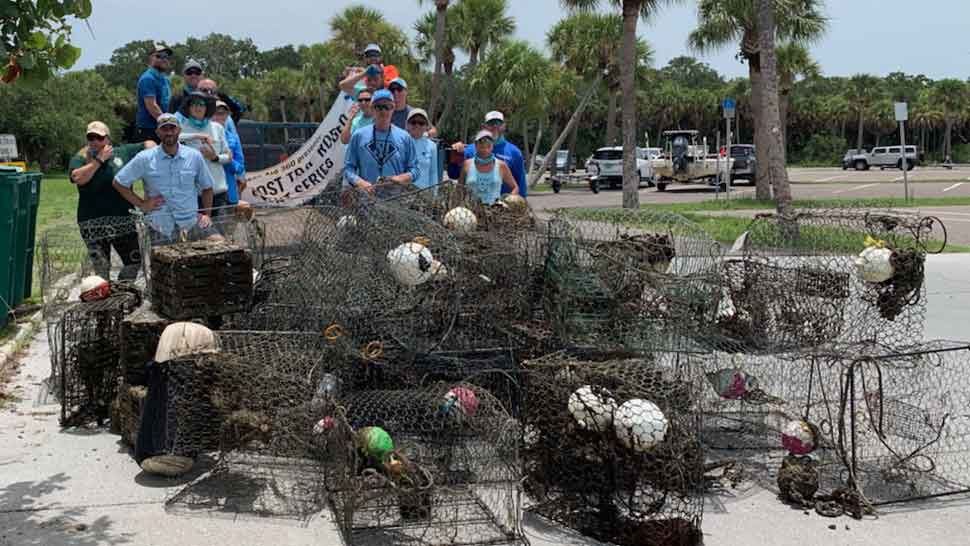 Participants in the July 13 "Ghost Trap Rodeo" volunteer event, along with a collection of the crab traps they were able to recover throughout the day. (Jorja Roman/Spectrum Bay News 9)

PINELLAS COUNTY, Fla. — On Saturday, volunteers went out in boats around Pinellas County on a mission: to remove derelict crab traps left behind and forgotten by area crabbers.

The Ghost Trap Rodeo has been held over six previous occasions going back to October 27, 2018. It's a conservation project funded by the National Oceanic and Atmospheric Association.

The project provides "an opportunity to do something about derelict and abandoned crab traps that fish unattended for years at a time, and other forms of marine debris, too, that negatively impact our fishery," according to project designer Ocean Aid 360's website.

"[Derelict crab traps] continue to trap fish, crabs and critters and nobody is checking on the traps to release them or free the critters, so they just die and deteriorate within those traps," said Serra Herndon, the Habitat Restoration Director at Tampa Bay Watch.

Herndon says that cycle continues. Derelict traps can also damage boats, and the ropes can injure manatees and turtles.

The project was made possible through community partnerships. Volunteers must receive permission from the state to remove the traps.

Saturday's rodeo was the largest this year. Volunteers were able to remove any crab trap they found because FWC had a closure in place.

Stone and blue crab traps had to be removed before July 10 or volunteers would be allowed to pick them up.

Throughout the six locations, 176 crab traps were collected. Some were derelict, while others were not picked up in time ahead of the closure.

After the Ghost Trap Rodeo event ended, we learned from FWC that they plan to end the closure early, at midnight on Sunday, July 14. Traps can once again be put out by crabbers at 12:01 a.m. Monday morning.