Mist and smoke cover the top of a building near 51st Street and 7th Avenue June 10, 2019, in New York, where a helicopter was reported to have crash landed on top of the roof of a building. Mark Lennihan/AP.

One person in a privately-owned helicopter was killed Monday afternoon after the aircraft crash landed on the roof of a building in Manhattan, over 50 stories in the air, officials said.

FAA: PILOT WAS THE ONLY ONE ON THE HELICOPTER

The New York City fire department said it happened at 787 7th Avenue, between 51st Street and 52nd Street in Midtown, around 1:45 p.m. Monday.

Images from the scene of today’s helicopter crash at 787 7th Ave. in Manhattan. #FDNY members remain on scene. There is one fatality reported. pic.twitter.com/7qyyJWrMsw

According to the preliminary investigation, the victim was pronounced dead after first responders, who responded in about four minutes, found the person on the roof. The victim is presumed to be the pilot. 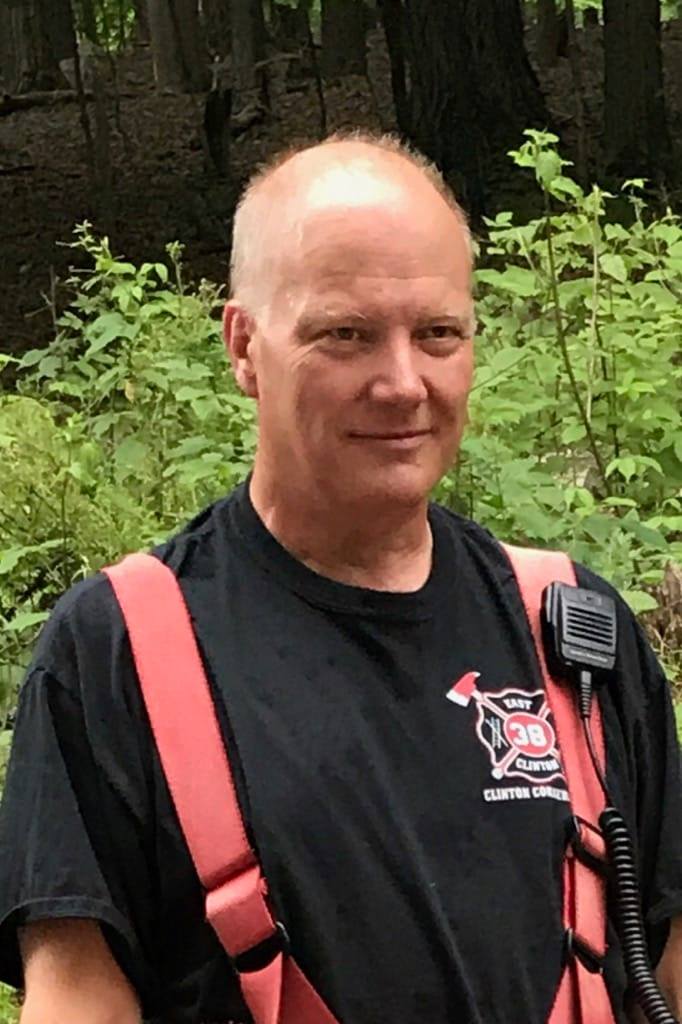 "We are mourning the loss of Tim McCormack who has flown for us for the past five years. Our hearts are with his family and friends," the company said in a statement.

In a statement, the FAA said a preliminary investigation found that only the pilot was aboard the helicopter, and FAA air traffic controllers did not handle the flight.

A flight restriction in effect since President Donald Trump took office bans aircraft from flying below 3,000 feet within a 1-mile radius of Trump Tower, which is less than a half mile from the crash site.

The Agusta A109E helicopter crash landed after it took off from the 34th Street heliport, Police Commissioner James O'Neill said. The helicopter flew for 11 minutes in the skies over New York City before it crashed, officials said.

LaGuardia Airport Tower would have needed to give approval for the helicopter to go into that no fly zone, New York City Mayor Bill de Blasio said.

The helicopter's apparent home base was Linden, New Jersey, officials said. It's unclear if the pilot was heading directly there, however.

It's not clear why the helicopter was flying in the restricted area. The building was not equipped with a helipad, according to New York Rep. Carolyn Maloney.

The city currently allows helicopters to take off and land from three heliports, one each on the east and west sides and downtown Manhattan. All border rivers.

NO INJURES TO PEOPLE INSIDE THE BUILDING

A two-alarm fire on the roof, caused by the crash, was extinguished in less than an hour. The FDNY had to use a special hose to put out the fire, and also had to mitigate fuel leaking from the helicopter.

Cuomo added that there was no indication that this was an incident of terrorism.

A helicopter landed on the roof of this building in Midtown Manhattan. Watch @NY1 for live reports. pic.twitter.com/xswyci3CCT

The exact cause of the crash was not confirmed, and the governor did not confirm if it was an emergency landing.

It's not clear if weather played into the crash. Clouds obscured the roof of the building around 2 p.m. and heavy fog was present in the area since late-morning.

According to Maloney, news helicopters were told the cloud ceiling of 900 feet was too low to fly. Visibility at the time of the crash was less than 1 mile because of the heavy fog.

It was once more common for helicopters to take off from private Manhattan rooftops, the most famous of which was on what was then the Pan Am Building (now called the MetLife Building). In 1977, four people waiting on the roof were killed when a helicopter toppled over and a rotor blade broke off and hit them. A fifth person, a pedestrian, was killed by falling debris. That spurred a push to close down private helipads.

Several New York lawmakers, including Maloney, are calling for a ban on helicopter flights over Manhattan.

Trump tweeted from Washington that he had been briefed on the crash. Cuomo's office said the president and governor had spoken.

The National Transportation Safety Board was sending an investigator.

WITNESSES: WE FELT THE BUILDING SHAKE

Some witnesses said it took them about 30 minutes to evacuate the building. People in nearby buildings were also evacuated.

We felt a jolt in our building and shortly after got the instruction to evacuate. #NYC #Evacuation #Midtown pic.twitter.com/lH2YwilqqJ

Our @mikescotto is on the scene in Midtown with a man who says he was inside the building, on the 29th floor, as the helicopter made a hard landing on top of the high rise around 1:35 p.m. He says it felt like someone gave him a “hard shove” when copter touched down. pic.twitter.com/bA4Ob6UI6n

The building was still off-limits to tenants around 6 p.m. Officials initially said the crash landing didn't cause structural damage to the building, but the FDNY later determined it had caused structural damage to the top of the building. FDNY officials said they didn't think that would prevent building occupants from returning within 48 hours. The city buildings department is investigating when they can return.

Nicholas Estevez told NY1 that a piece of the helicopter fell in front of his vehicle on the street. 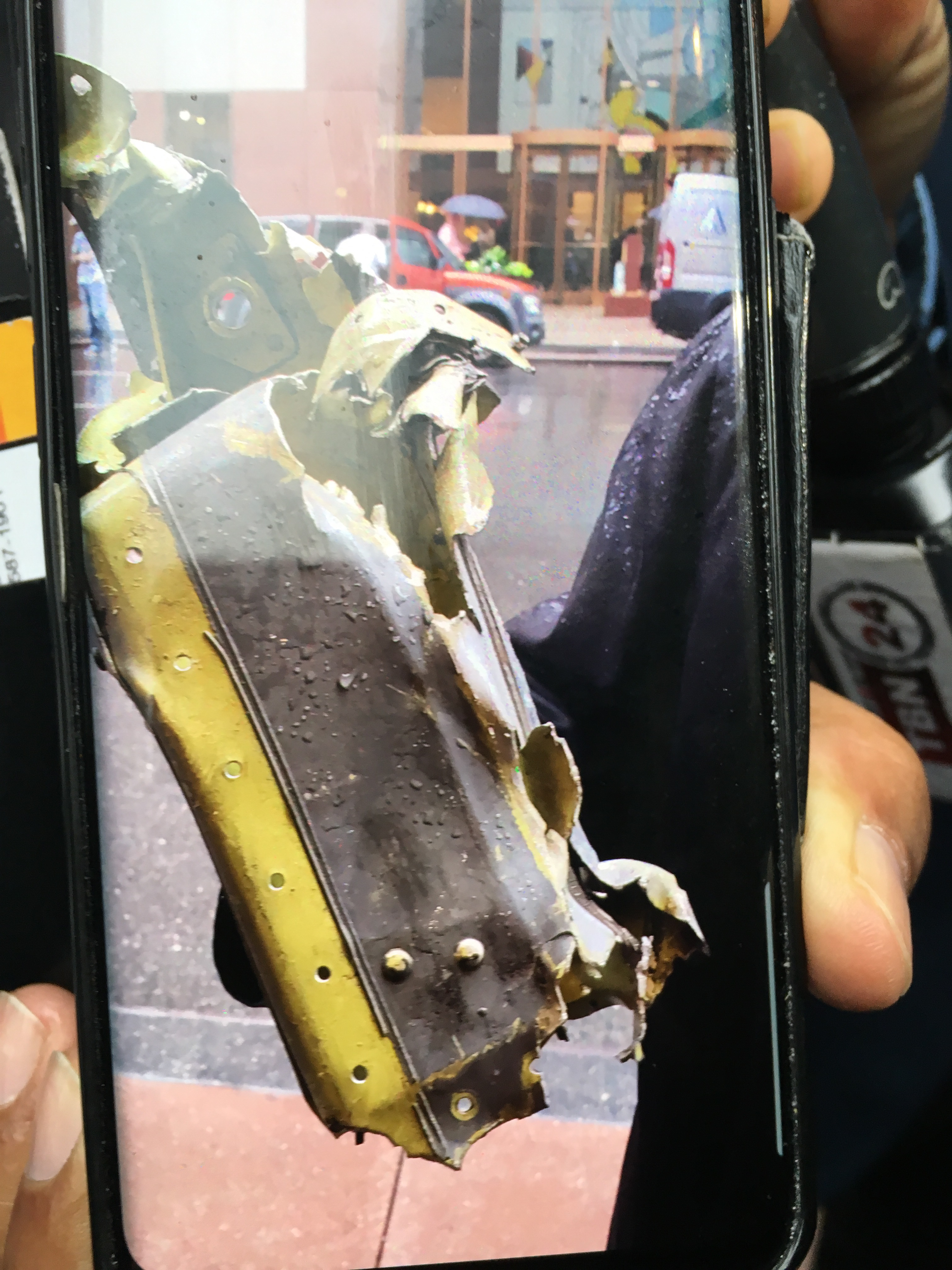 (A piece of the helicopter that fell in front of a car on the street, according to a witness. Ruschell Boone/NY1.

Pedro Rodriguez, a pastry line cook at Le Bernardin, a well-known restaurant in the building, said workers got an announcement telling everyone to exit, and he later heard from people around him that there was a fire on the roof. The evacuation wasn't chaotic, Rodriguez said, but he was rattled because he immediately thought of the September 11 attacks.

"It's scary when something like this happens," he said.

Alex Jacobs was working on the seventh floor when he heard bells and an announcement to evacuate. He and his colleagues — who hadn't heard or felt an impact — used stairs to a fire exit. "It's really unfortunate. I just hope everyone's OK," he said.

The building was deemed safe by the early evening, according to officials.

McCormack was a former fire chief in upstate Clinton, New York. With 15 years of experience flying helicopters and single-engine airplanes, he was certified as a flight instructor last year, according to Federal Aviation Administration records.

The East Clinton Volunteer Fire Department posted on Facebook that McCormack's "technical knowledge and ability to command an emergency were exceptional."

The 19-year-old helicopter was linked to a real estate company founded by Italian-born investor Daniele Bodini, according to FAA records.

The helicopter went down about 11 minutes after taking off from a heliport along the East River, a little more than a mile away. Police Commissioner James O'Neill said it may have been returning to its home airport in Linden.

The director at Linden Municipal Airport, Paul Dudley, described McCormack as "a highly seasoned" and "very well regarded" pilot who was a regular at the airfield.

He suspects that a mechanical problem or the weather "overwhelmed him and the helicopter," Dudley said. "I believe he tried to get on the roof and spare the people on the ground."

McCormack, 58, chronicled some of his helicopter flights on his Facebook page, including a 2014 emergency landing caused by a bird strike. He had been conducting a sightseeing tour over Manhattan when the bird penetrated the windshield of his Bell BHT 407, causing McCormack to land unexpectedly at the West 30th Street Heliport.

"It was pretty much like an explosion going off in your cockpit," McCormack told television station WABC at the time.

New York City has a history of both minor and major helicopter wrecks and crash landings.

Last month, a helicopter crash landed in the Hudson River near a busy Manhattan heliport. The pilot escaped mostly unscathed.

In 2006, New York Yankees pitcher Corey Lidle's single-engine plane slammed into the 20th floor of a building on Manhattan's Upper East Side, killing Lidle and his flight instructor. It was not clear which one was piloting the plane.

The National Transportation Safety Board concluded the pilot misjudged a narrow U-turn before veering into the building.