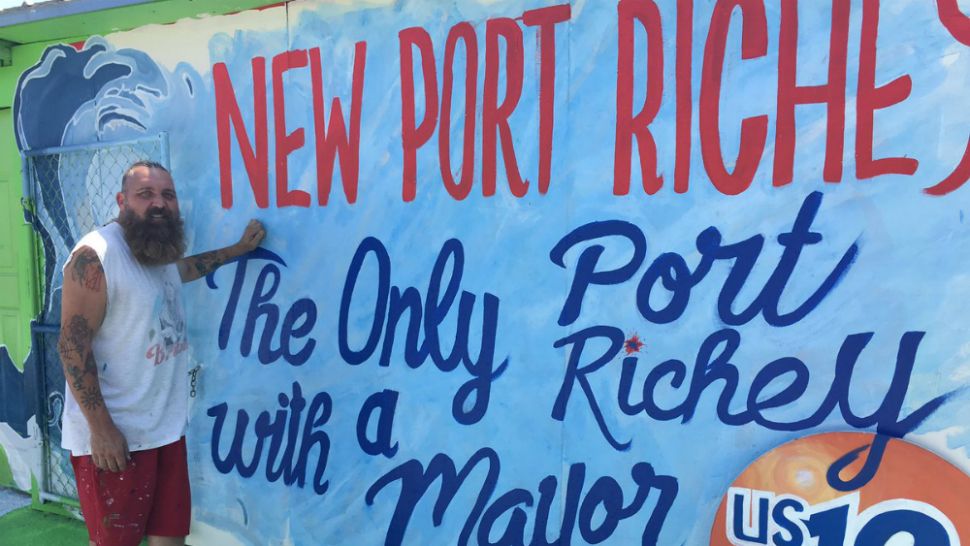 The artist behind the sign is Adonis Hunter. (Tim Wronka/Spectrum Bay News 9)

NEW PORT RICHEY, Fla. — A new sign on U.S. 19 in Pasco County is getting a lot of attention.

It's of course referring to Port Richey's recent problems with keeping a mayor in office.

The artist behind it is Adonis Hunter.

His day job is running Battery Viking in New Port Richey. But his real hobby is what he paints on the side of the building.

"I started putting things up there that I wanted to say," Hunter said. "Because I'm a fool sometimes. I'm a comedian. So I put it out there and a couple of them went over really well."

He's been putting up different murals on the building over the last year.

Have you seen this painting in New Port Richey? 😂 pic.twitter.com/fN7kbtfYHA

His latest work with the mayor painting has become quite a hit. Even New Port Richey Mayor Rob Marlowe himself paid the new sign a visit.

Hunter says that sometimes he changes the mural as often as every day. But he says this one may stay up a bit longer thanks to all of the attention it's getting.

"When Bay News 9 comes in, you may want to leave it a little bit longer," Hunter joked.

Hunter's murals have now built quite the following on social media. He has a Facebook page called U.S. 19 Sign.

"I've been looking at signs my whole life. I'm fascinated by them," Hunter said.

All he asks in return is that you give his work some thought when you pass by his business in U.S. 19 and Trouble Creek Rd.

"I want you to ask, 'What is that little green building? We've seen it for years. But look at all of that paint on it. Oh look at that.'"

Former Port Richey Mayor Dale Massad is set for a trial on June 24 in one of three criminal cases he faces. ​