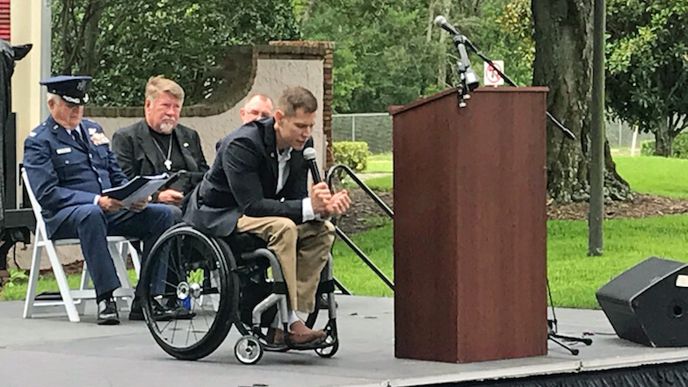 Dillmann and one of his closest friends were on a night mission when their truck rolled over an IED. The blast that killed his friend was the same one that left Dillmann paralyzed from the chest down. (Angie Angers, staff)

PALM HARBOR, Fla. -- It's not easy for SSG Alex Dillmann to relive the day that his life changed forever.

It was late Feb. 2011 while deployed in Afghanistan when he lost one of his closest friends, Sgt. Kristopher Gould.

The two were on a night mission when their truck rolled over an IED. The blast that killed his friend was the same one that left Dillmann paralyzed from the chest down.

On Monday morning, Dillmann shared his story to more than 300 people at Curlew Hills Memory Gardens.

He reflected on one of the hardest moments, when he was still learning to get around on his own and fell to the ground.

"I was looking up at the ceiling … and thinking, ‘I don't want to be here anymore,’" he said to the audience.  "Then I thought of Kris and him saying 'Hey man, it could always be worse.'"

Dillmann says that it's Kristopher's spirit that drives him every day.

"It's natural to feel self-pity, but as soon as he pops into my mind it just shuts it all down, and I get right back on track and continue the mission," he explained.

Dillmann says his wife Holly has also been crucial in his road to recovery. His life also took on a new purpose in 2016 when they welcomed their son into the world.

"It's just the American Dream. It definitely gives me another reason to wake up and to continue, and to provide," Dillmann said.

They named him Maximus Kristopher, in honor of his late friend. It was a decision, Dillmann says, that was very easy to make.

"It was only natural, and it helps me too because every time I look at him, I see a little bit of Kris!" he exclaimed.

Dillmann is now attending Kaiser University and is working towards a degree in cyber forensics. He hopes to continue on and work for the Department of Homeland Security.

Dillmann shared his story in front of a crowd of 300 in Curlew Hills Memorial Gardens on Memorial Day. (Angie Angers, staff)