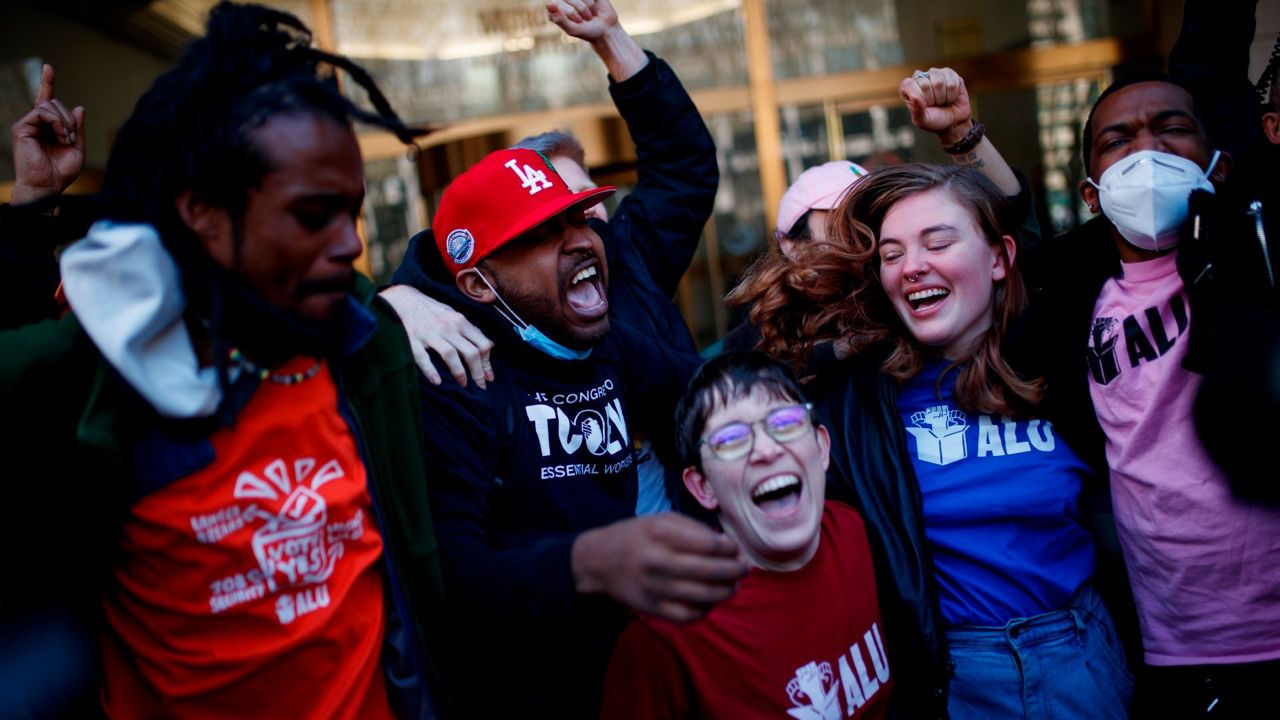 Staten Island based Amazon union members celebrate after getting the voting results to unionize on Friday. (AP Photo/Eduardo Munoz Alvarez)

'The people have spoken': Staten Island Amazon workers vote in favor of union

STATEN ISLAND, N.Y. — Workers at an Amazon warehouse on Staten Island have voted in favor of unionizing, putting the site on track to become the first Amazon facility in the nation to unionize.

A total of 2,654 workers at Amazon's JFK8 warehouse voted in favor of unionizing, while 2,131 voted against the union, the National Labor Relations Board said Friday afternoon. Seventeen ballots were voided, according to the board.

Nearly 60% of 8,325 eligible voters cast ballots, the board said. Workers at the warehouse will be represented by the Amazon Labor Union.

The union is not affiliated with any of the five boroughs’ established labor organizations, but rather comprises current and former employees. Voting at the facility wrapped up at 1 a.m. Thursday.

Chris Smalls, a fired Amazon employee who has been leading the ALU in its fight on Staten Island, bounded out of the NLRB building in Brooklyn on Friday with other union organizers, pumping their fists and jumping, chanting “ALU.” They uncorked a bottle of Champagne.

In a statement released shortly after the vote count on Friday, Amazon said it was "disappointed with the outcome of the election in Staten Island because we believe having a direct relationship with the company is best for our employees."

"We’re evaluating our options, including filing objections based on the inappropriate and undue influence by the NLRB that we and others (including the National Retail Federation and U.S. Chamber of Commerce) witnessed in this election," the company added.

Amazon workers in Bessemer, Alabama, meanwhile, appear to have rejected a union bid but outstanding challenged ballots could change the outcome. The votes were 993-to-875 against the union. A hearing to review 416 challenged ballots is expected to begin in the next few days.

The union campaigns come at a time of widespread labor unrest at many corporations. Workers at more than 140 Starbucks locations around the country, for instance, have requested union elections and several of them have already been successful.

After a crushing defeat last year in Bessemer, when a majority of workers voted against forming a union, the Retail, Wholesale and Department Store Union got a second chance to organize another campaign when the NLRB ordered a do-over after determining that Amazon tainted the first election.

The NLRB last month confirmed that Amazon and union organizers reached an agreement to hold an election at a second warehouse on Staten Island, known as LDJ5, during the week of April 25.

The decision at that warehouse would affect approximately 1,500 employees.