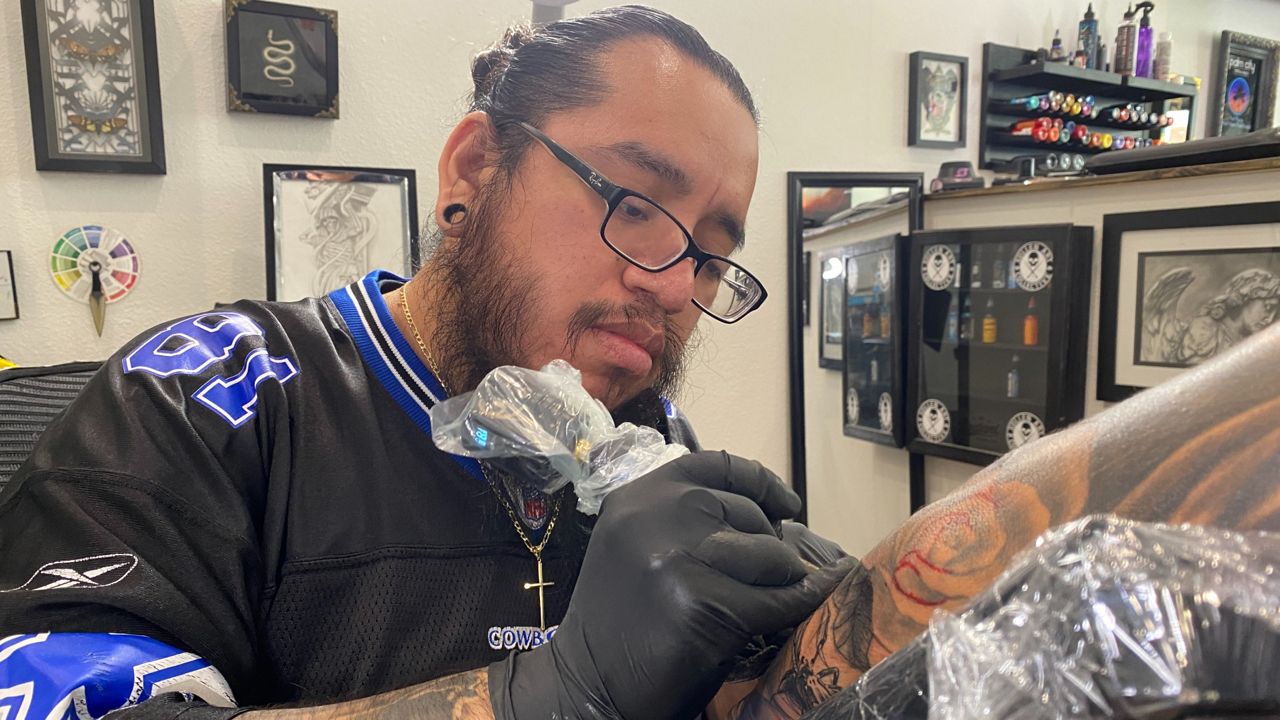 Isidro Saenz, an 11-year tattoo artist, says tattoo parlors have a lot of policies in place to protect the health of their artists and clients. (Spectrum News 1/Michael Lozano)

'We deal with a lot of people': Tattoo artists on high alert as monkeypox cases rise in Dallas County

DALLAS — Dallas County health officials are urging residents to take precautions as monkeypox becomes more of a concern. As of Aug. 12, Dallas County Health and Human Services reports there being a recorded 265 cases.

While still on the lower side, Dallas County Judge Clay Jenkins issued an emergency declaration on Aug. 5, wanting to get the ball rolling on getting the necessary resources and more vaccines.

Christian Grisales, a DCHHS spokesperson, told Spectrum News 1, “We are seeing an increase in cases.”

Monkeypox, according to the CDC, can spread between people through direct contact with sores, scabs, or bodily fluids, meaning industries like tattoo parlors and barber shops, which rely on closer contact with their clients, could be at risk.

Isidro Saenz, an 11-year tattoo artist, who currently works at Momentum Tattoo in downtown Garland, always has safety on his mind.

“We deal with many people, a lot of blood, a lot of pathogens,” Saenz said.

Ever since they had to navigate the COVID-19 realm, Saenz says they're already stringent health and safety policies are being doubled down.

“Most of the time, like I said, the client will tell you straight up, ‘Oh hey, look, I’ve got a cut or something’s wrong,’” Saenz said.

Saenz says it’s already common practice to avoid doing work on a client who has exposed, blistering or infected skin.

According to DCHHS data, nearly all the monkeypox cases involve men who are being intimate with other men. But health officials say it’s not a sexually transmitted disease and that anyone can get monkeypox, if they’re in close contact with someone who has the virus.

“In addition to wearing a mask, you also should wear long sleeve shirts, pants, because this is a virus that is on the skin,” Grisales said.

DCHHS states those with monkeypox “may experience fever, rash, and swollen lymph nodes, as well as more serious complications,” while some individuals “will have mild to no symptoms and can still test positive for the virus.”

“It’s why we want people to be careful, to be cautious, and to take every precaution necessary to avoid getting monkeypox and spreading it,” Grisales said.

While DCHHS works to get more monkeypox vaccines, Saenz says he plans to take the virus seriously.

If you need more information regarding monkeypox, vaccines, or testing, you can visit the DCHHS website for those details.