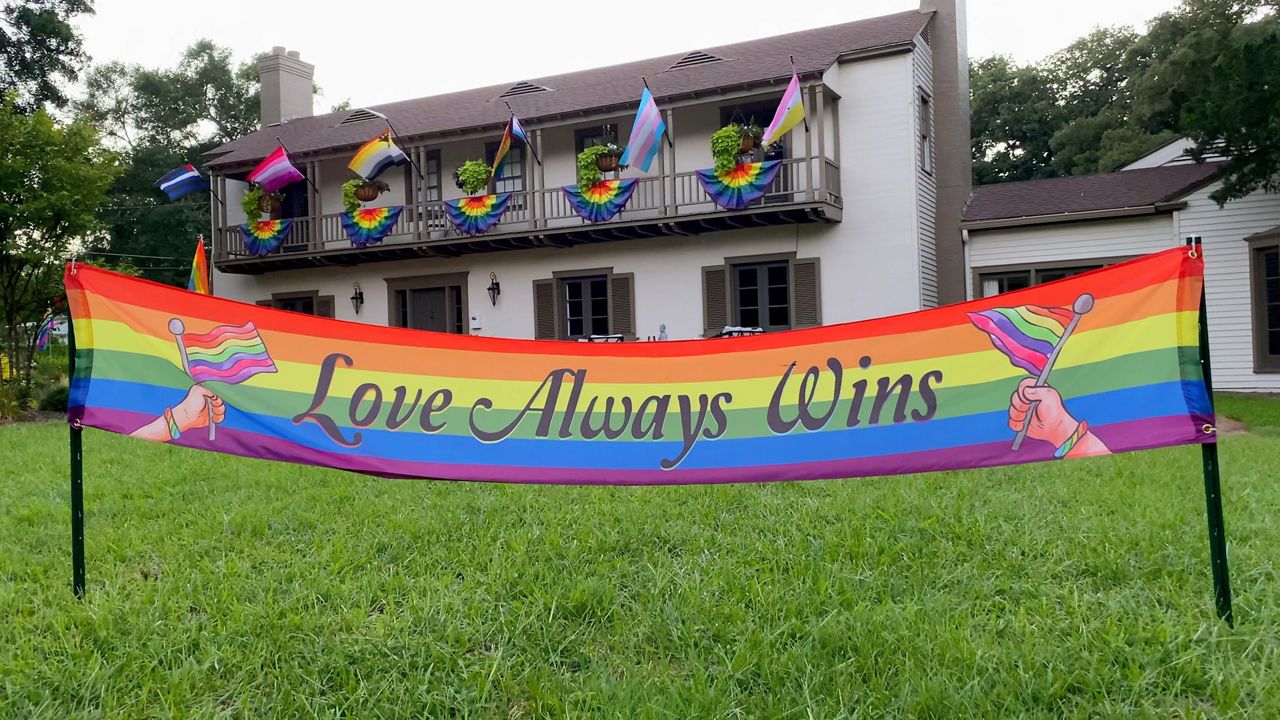 CORSICANA, Texas — Terry Garner isn’t the kind of person who seeks to be in the limelight.

However, this month, Garner’s gotten a lot of media attention after his family fell victim to a hate crime with their Corsicana home being vandalized.

Garner and his husband Keith Dowler have lived in Corsicana for the last four years and are raising their 8-year-old daughter.

“We feel like we’ve found our dream home,” said Garner. “We wanted to move to the country, because we both grew up in small towns. We wanted to move here so that we could raise our daughter with small town values, and with community.” 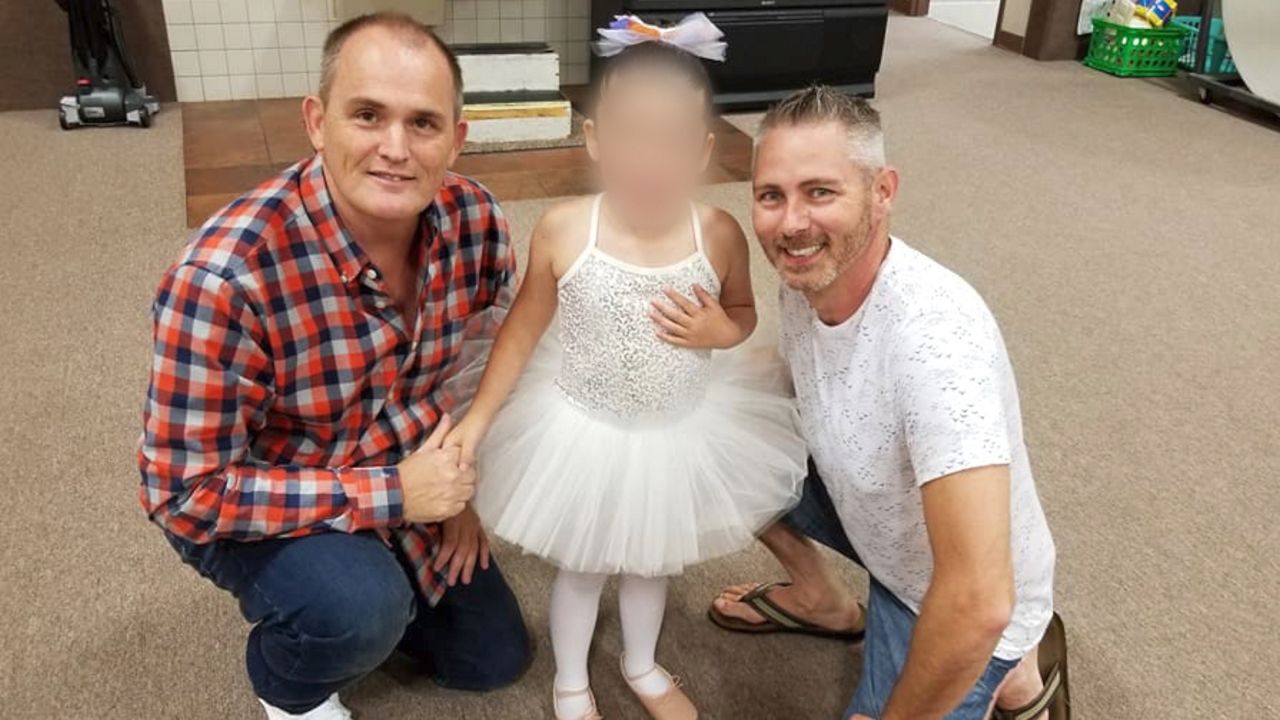 Husbands Terry Garner and Keith Dowler smile for a picture with their daughter after a dance recital. (Spectrum News 1/Lupe Zapata)

The couple has been together for the last 26 years and were married in 2016. “We met in a bar in Memphis,” recalled Garner, with a smile on his face. “He was standing in the corner and all I could see was his beautiful clear blue eyes.”

Soon after their chance meeting, the couple embarked on a nine month courtship. “We’re very old-fashioned,” said Garner “The more I got to know him, the more I fell in love.”

When they made the decision to move to Corsicana, they knew they’d most likely be the only openly gay couple in town raising a child, but that didn’t sway them from moving into their dream home.

The five bedroom, five bathroom, 5,575 square-foot home was built in 1934 had only had two previous owners. Garner said it was everything he and Dowler were looking for, especially because it resembled a New Orleans-style house, where they’ve also previously lived.

“Keith and I named this house the ‘Love Story Mansion,’” said Garner. “The Love family built the house, and they also had an adopted daughter like us. That daughter married her high school sweetheart, who had the last name of Story. Part of mine and Keith’s love story is our daughter, so that’s how the house got the nickname. It follows their love story, and ours.”

The couple has put a lot of time and money into renovating the home. Although he doesn’t ask for it, Garner said he enjoys the compliments he and Dowler get for their landscaping and, “curb appeal.”

Garner and Dowler are proud of the life they’ve created together, but haven’t really celebrated Pride month in the past. However, at the request of their daughter, the couple decided to decorate this year.

“This is actually the first year we’ve gone out like this,” said Garner. “We’ve never really hung a pride flag.”

Due to their daughter’s excitement, the couple decided to “go all out,” according to Garner. He and Dowler displayed more than a dozen Pride flags and rainbow banners.

On June 2, after just one day of the decorations being up, they got a late night phone call from the police.

“They told us your house had been vandalized,” said Garner. “I said, ‘Keith, wake up! The house has been vandalized,’ and the first thing out of Keith’s mouth was, ‘Well, that didn’t take long!’”

The family had 10 flags in their front lawn burned, with one left ablaze at their front door.

“To have to tell your child about hate is horrible,” said Garner “It’s horrible, to have to say, ‘Somebody burned your flags because they hate us.’”

A few days after the incident, Garner spoke at a Corsicana City Council meeting about the incident that local police are investigating as a hate crime. 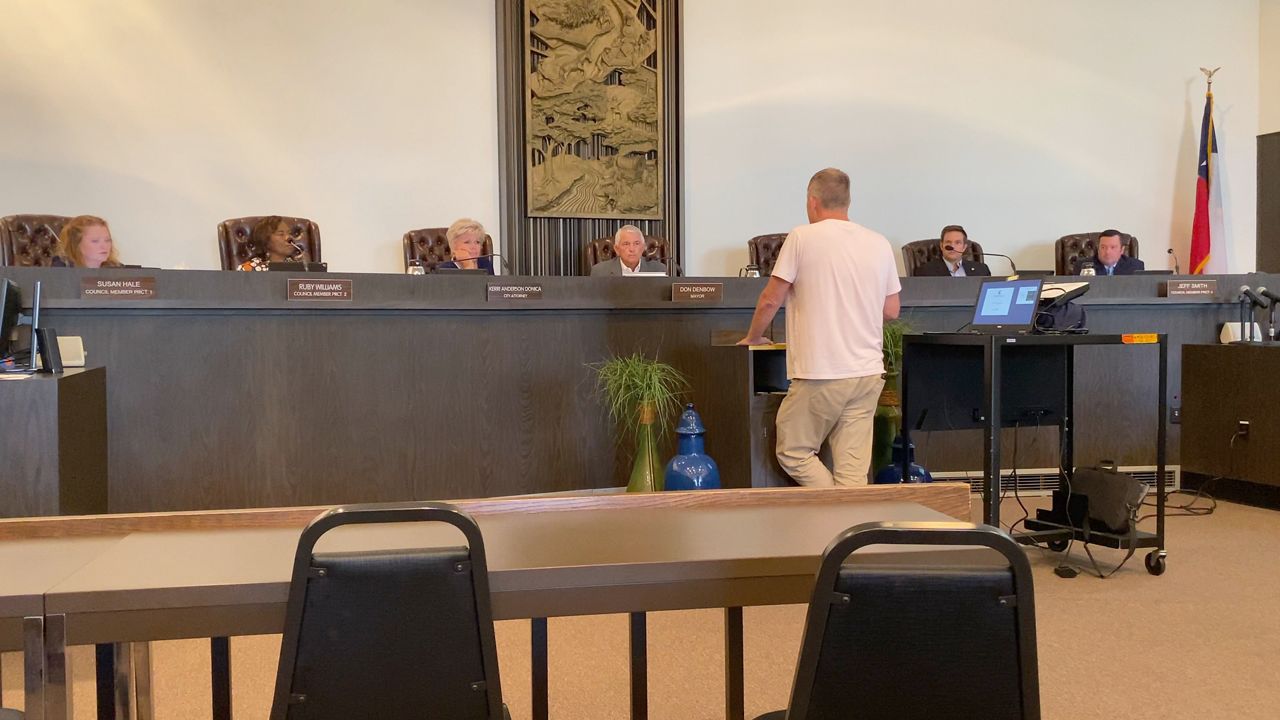 Terry Garner spoke at a June 13 Corsicana City Council meeting after his Pride flags were burned. During the meeting, Garner asked Corsicana Mayor Don Denbow and the six other council members to declare the rest of June as Pride month in the city. (Spectrum News 1/Lupe Zapata)

During the June 13 meeting, the feeling in the room was tense, according to Garner. He explained the council meetings don’t always have heavy attendance.

This meeting was unusual with Spectrum News 1 and NBCDFW present with cameras rolling to document Garner addressing the council about the flags being burned.

During the meeting, Garner asked Corsicana Mayor Don Denbow and the six other council members to declare the rest of June as Pride Month in the city.

“I’m also asking that city council create a Department of Inclusion and Diversity,” said Garner while he addressed council members from their chamber podium.

At that point, none of the council members had addressed the incident that Corsicana police is investigating as a hate crime. 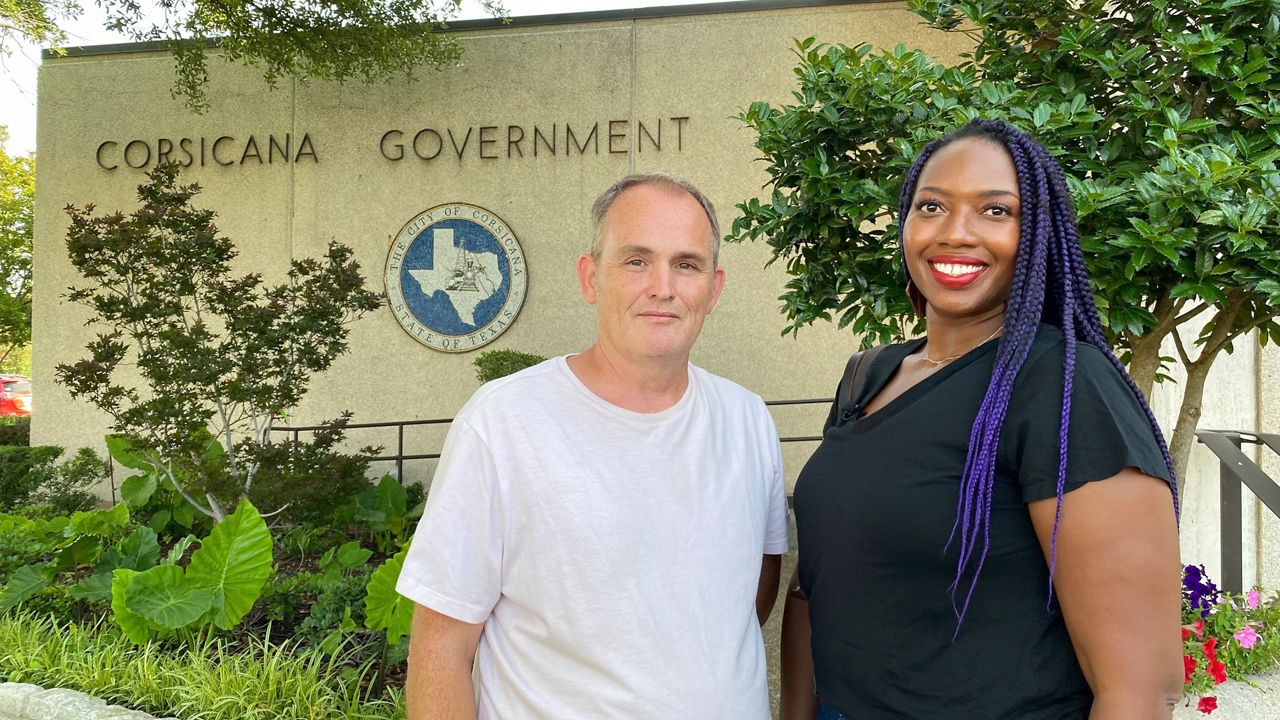 “That doesn’t make sense,” said Kimberlee Walter, one of Garner’s friends who showed up to speak “It’s crazy to me that with all the media attention this hate crime is getting, not a single council member has publicly addressed it on social media or even at tonight’s meeting.”

Walter wasn’t the only one to demand the city council to take action. Another Corsicana resident and friend of Garners who attended the meeting was Kathy Collier.

“I’m a proud LGBTQ ally,” said Collier, who attended the meeting with her husband. “The definition of an ally is one that walks the walk with the LGBTQ+ community. This council needs to know that if you don’t respect us all, you don’t respect any of us.”

Walter, who has spoken at multiple city council meetings said it was appalling how council members wouldn’t address such a heinous crime, “Those burning flags could have destroyed Terry and Keith’s home, it was a malicious act and that kind of thing happens here in Corsicana.”

Click here to view the full June 13 city council meeting Garner, Walter and Collier spoke at on the city’s website.

Walter said she was happy to see Garner and Dowler quickly respond to the vandalism by replacing the 10 burned flags with new rainbow flags, and a large banner that reads, "Love Always Wins." However, soon after, they had two flags from the new batch stolen from their front lawn.

“We need to use these incidents that are hate crimes to advance our cause for change here in Corsicana,” said Walter.

The department is asking anyone that may have information about the case to contact Corsicana Police at 903-654-4900. Tips can also be sent to the department’s Facebook. A reward of more than $1,300 is also being offered. 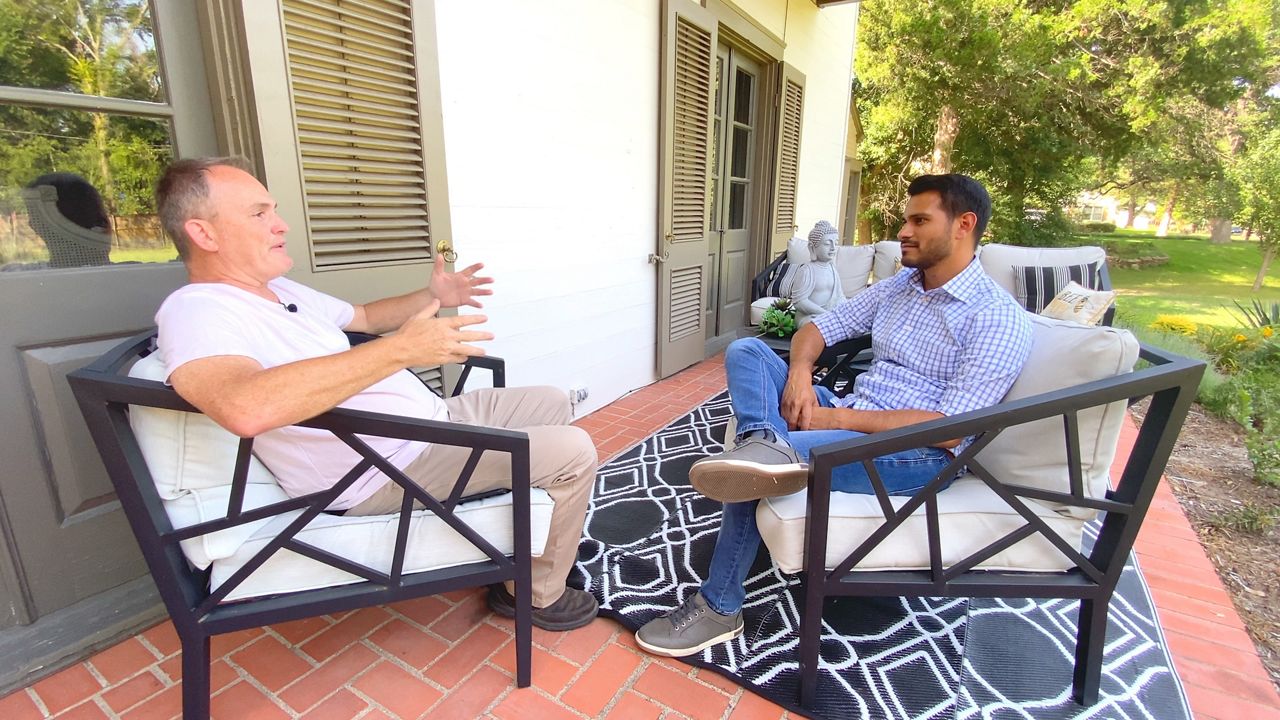 When asked if he was afraid the vandalism would happen again, Garner’s eyes began to tear up.

“Fear breeds hate, so we’re not fearful because we love, and we want to show people that we can overcome hate by not being fearful, and by loving our neighbors, and we love our neighbors,” said Garner.

The incident has sparked change in the city.

“My 70-year-old neighbor has two rainbow flags waving at her house,” said Garner “As you drive around town there are other neighborhoods where they’re starting to pop up, we’ve seen more than five. I was told there’s a lady who ordered 50 pride flags and is passing them out all over town in support. It’s an emotional time, because something good is coming out of something so bad, it just goes to show love always wins.”

And that’s why, for the first time, rainbow Pride flags are flying at homes this Pride month in small town Corsicana, Texas. 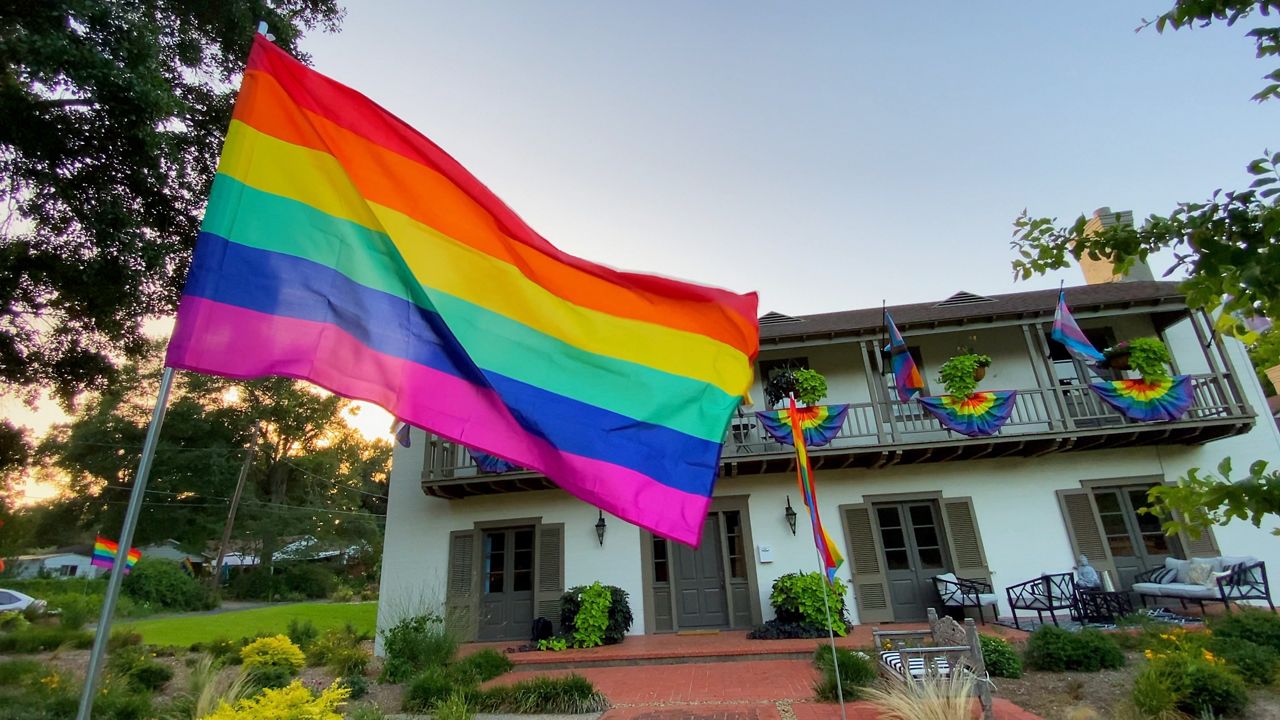 Residents in Corsicana, Texas are flying rainbow Pride flags as a show of support after a local family had their Pride decorations burned in their front yard. Police are investigating the incident as a hate crime. (Spectrum News 1/Lupe Zapata)

Share your ideas with DFW Human-Interest Reporter Lupe Zapata by emailing him at Lupe.Zapata@Charter.com