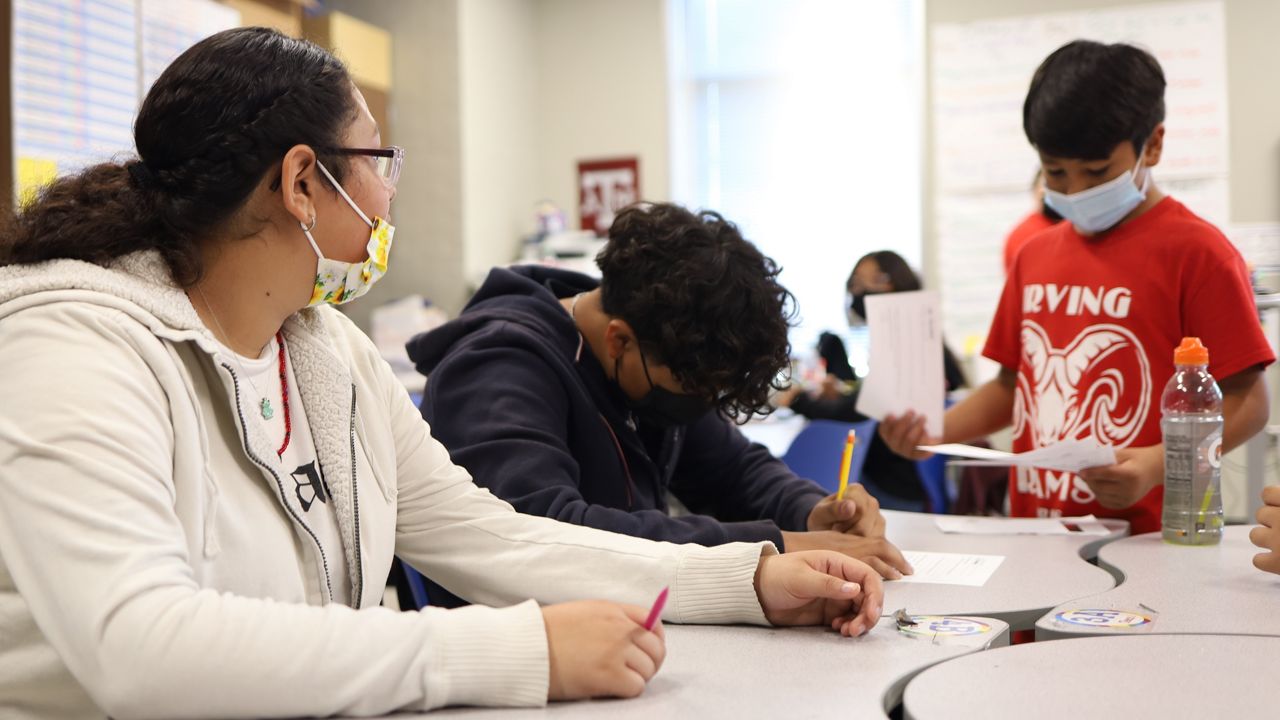 Karen looks over to her classmate as he passes out the class warm-up to everyone. (Spectrum News 1/ Jose Arredondo)

SAN ANTONIO — When the Irving Dual Language Academy mariachi group performs, they make sure to dress the part.

They are draped in their red and white three-piece suits with their white botas.

Singer Sebastian paced as the violins and guitars sounded behind him as the group played “Adiós Amor.”

On the violin was eighth-grader Karen, who says she is grateful to be a part of this dual language program for reasons that are beyond a curriculum.

“I was thinking if I was to go to a normal middle school that all my classes would just be in English, and I wasn’t going to be able to speak a lot of Spanish, which was my first language,” Karen said.

Karen is a first-generation American and her mother is from El Salvador, so her main concern was to not lose her native tongue.

“In my head, I was thinking if I were to lose my language, it would be difficult for her and I to communicate,” Karen said.

This dual language academy located on San Antonio’s West Side in an immigrant-heavy neighborhood.

Ramsez, whose mother is from Mexico, says it’s been a comfortable experience for his entire family.

“Knowing that oh, people are going to know what I’m talking about, where I’m coming from,” Ramsez says. “As in people that speak Spanish, obviously.”

Ramsez isn’t in extracurriculars, but he’s a talented artist. He showed Spectrum News 1 his drawings, and prior to his interview, he sat in on Karen and Sebastian performing.

Irving offers ESL classes for parents as well, but prior to coming to this academy, Ramsez had to be the translator for his mother and his teachers.

“Yes, I would have to translate the mail all of the time. Translate what they wanted me to do, as in like they would send me letters for specific programs,” Ramsez explains. “What does this mean? Oh, it means this.”

That was something his teacher, Jaqueline Hernandez, also went through.

“Yes, they wanted the best for me and they didn’t know what that meant for me in English. Also, I’m the oldest, so I had to translate not only for my parents but for my brothers,” Hernandez said.

She was recently named teacher of the year. It’s probably because she could connect with these students on a deeper level.

“It’s most important if my students believe that’s what I deserve,” Hernandez said.

After she said this statement, her students, who were sitting behind her during the interview, applauded her for the award. So it’s safe to say that they believe she is deserving of the award.

It’s also safe to say that students like Ramsez love that they are learning English while keeping their native language.

“Here, they just really accommodate to you and what you want to do. They are giving me a better chance at technically life, being better at life,” Ramsez says.