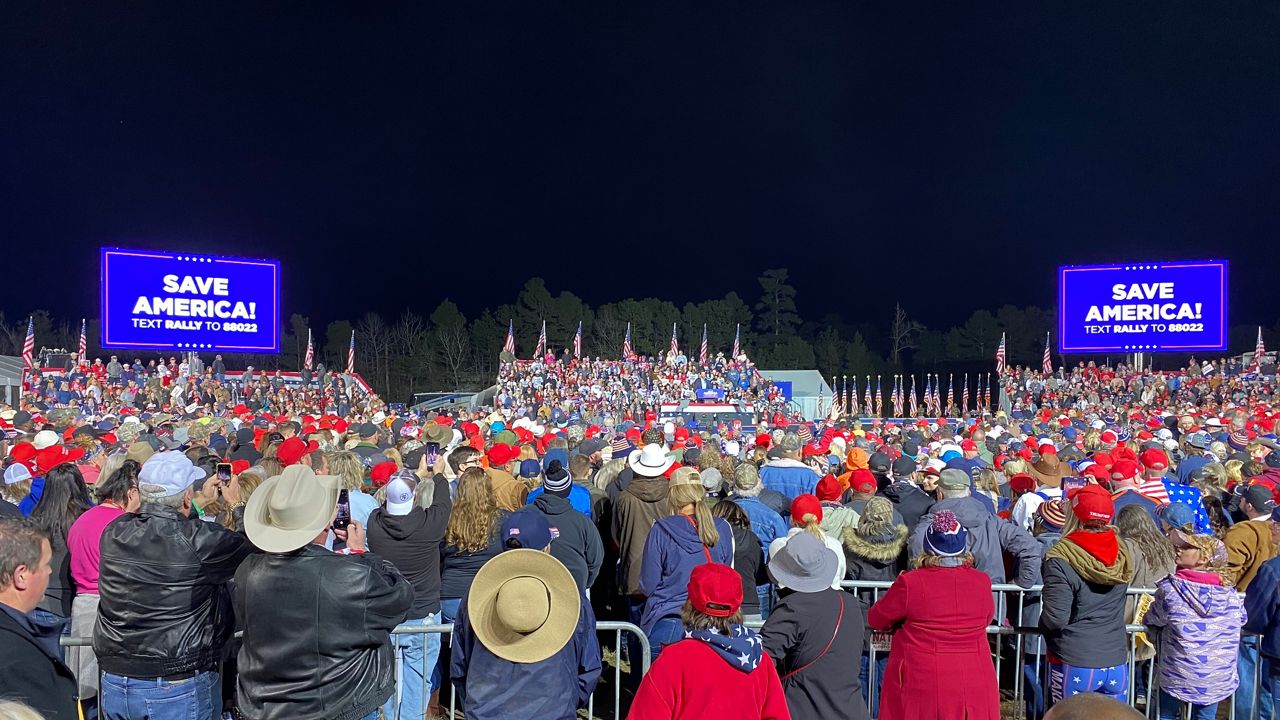 Crowds at Trump rally in Conroe, Texas, in this image from Jan. 29, 2022. (Spectrum News/Jamil Donith)

CONROE, Texas — While former President Donald Trump was the main event at the "Save America Rally" in Conroe, Texas, Saturday, it was also a chance for state Republicans to capture more votes.

The event, which came about a month ahead of Texas’ primary election, featured a lineup of conservative candidates hoping to gain momentum and support at the polls.

It had the same energy as a sporting arena or sold-out concert as politicians got the crowd chanting, “Let’s go Trump! Let’s go Trump!”

This is Trump Country: In the reddest county in Texas, a crowd of his most loyal followers sported red, white and blue paraphernalia. And the candidates who took to the stage joined in on the revelry.

The “Save America Rally” featured some of the top conservatives in Texas — all there to sing the praises of their leader.

“Remember one year ago today when our world was a different place, and you know what that world was like under Donald Trump,” Paxton said.

It was an evening of groveling and rhetoric with plenty of mention of a potential Trump comeback.

These candidates are campaigning on the back of Trump's popularity with hopes an endorsement will secure their victory come March 1.

“When you go vote, you look down that list and you ask, has this candidate publicly endorsed Donald Trump for president for 2024?” Miller said. “Ask them that question. Let’s see who the real patriots are, right?”

Trump gladly took recommendations for endorsements too, as he pointed out to the crowd when he took the podium and mentioned one of his biggest supporters, Dan Patrick.

“He calls me — 'Sir, I think this one is great. Can you give them an endorsement?'” Trump said. “I said, 'Absolutely, Dan, whatever you want, Dan.' He’s got a hell of a lot of endorsements.”

So now these candidates will wait and see if the thousands of die-hard Trump fans who rallied for him Saturday will rally to the polls.

They ended the evening with every bit of confidence they got what they came for.

At the event, Republican candidates continued to falsely claim Trump won the 2020 election.

Trump is being investigated in several states for fraud, election tampering and his involvement in the Jan. 6 insurrection.