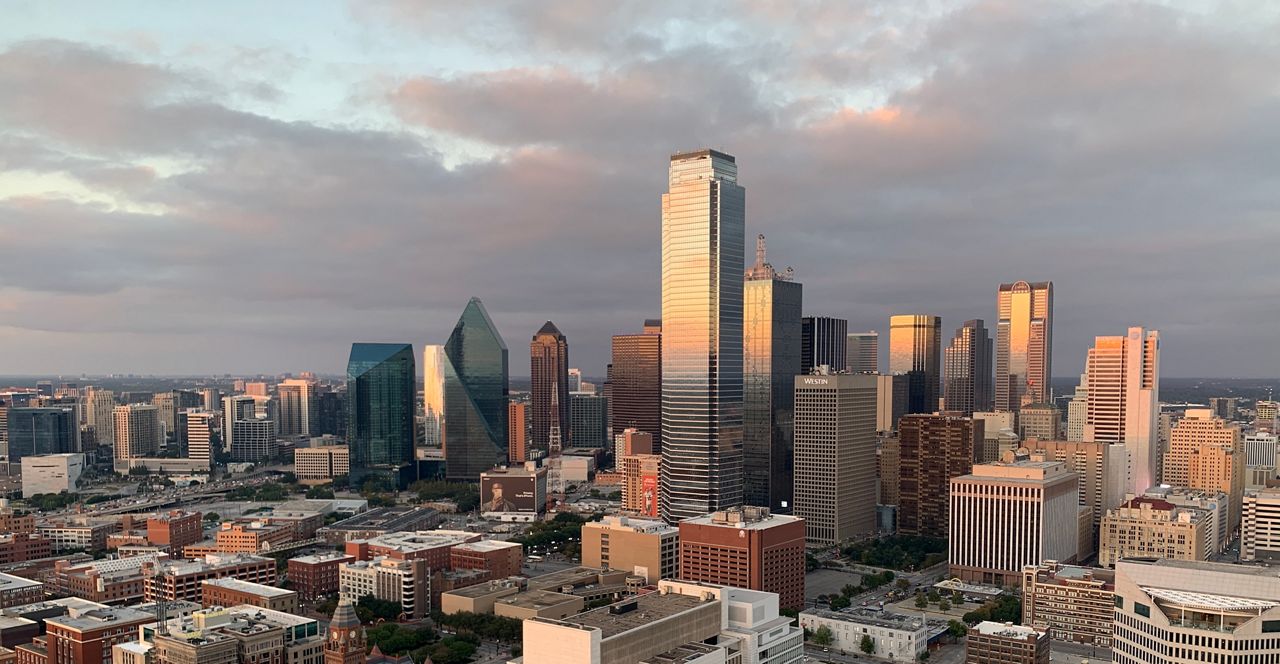 Downtown Dallas as seen from the top of Reunion Tower. (FILE)

DALLAS — In the last decade, the Dallas-Fort Worth region has grown by more than 1.2 million people, with DFW’s population growing by about 120,000 during the pandemic.

In terms of migration, not including births, 75,000 moved to DFW in 2020. That number is second only to Phoenix, where about 89,000 people moved to during the pandemic. For DFW, the population growth is happening, in large part, in the suburbs around Dallas, not so much in the Big D itself.

The suburbs are continuously growing, pouring money into city improvements to make them more attractive for those looking to forgo big city life for the 'burbs. One Richardson resident who spoke to Spectrum News 1 is now seeing the city’s efforts to make its downtown district more attractive to the community and those who visit.

“It's not just Dallas. There's Richardson, there's Wiley, Prosper, there's, you know, Frisco. I moved to Frisco in 2006 and it was nothing. And now it's like you don't even have to come to Dallas,” said Laci Coker, who owns a business in downtown Richardson.

Originally from Paris, Texas, Coker said she moved her bridal collaborative space, The Darling Co., which houses multiple vendors for perfecting brides’ wedding experiences, including her hair styling business Tease to Please, to Richardson in 2020 to keep with the “small town feel” she felt in East Texas. Little did she know, Richardson was smack dab in the middle of $21 million worth of infrastructure updates on Main Street, like adding a median with trees and wider sidewalks.

"When I decided to move The Darling Co. to Richardson, I didn't really know that they were going to revive it and make it so great. And so now that they are, it's so fun because you can see friends and family meeting outside, you can see first dates and you can see all these things that are happening right outside your window. Even just good food and good music and just life outside in an area that is coming alive. It's just really fun for me and just really sweet to see, since I came in at a time where it was nothing,” Coker said.

The historic downtown in Richardson, a part of the city’s “CORE District,” is now more pedestrian friendly. "Future plans for the CORE District include additional beautification and a new 14.5-acre mixed-use development at the northeast corner of Main Street and US 75,” the Richardson Today website reads.

Coker is hoping these upgrades will be what it takes to bring more traffic by the business. The Darling Co. is located at 111 E Polk St. and is home to fun and colorful murals by Created Art Co., and also where visitors spend time taking pictures with their friends and family. Coker hopes to see more colorful murals on the bare walls in Richardson.

"I think that the experience of walking around and having drinks and food on each corner of this Main Street area is going to be great. I think the foot traffic will be a lot better than it is now,” Coker said. "I do truly feel like whenever people come to Dallas, they're like ‘Top 20 places to visit in Dallas,’ and I do truly think Richardson will soon be on one of those lists of places to go and visit because it really is so unique."

For Coker, opening up her bridal collaborative space in downtown Richardson was a dream come true. She has a heart for small businesses and says everyone should support them, especially after a tough year during the height of the pandemic.

"Come to their pop-ups, come to their grand openings, come to the things that they're providing because they're just trying to make a fun experience too. And they're just trying to be more like the ones that have already been around forever,” Coker said. "I care so much about small businesses. And especially in the world today, small businesses are such a huge part of our world.”