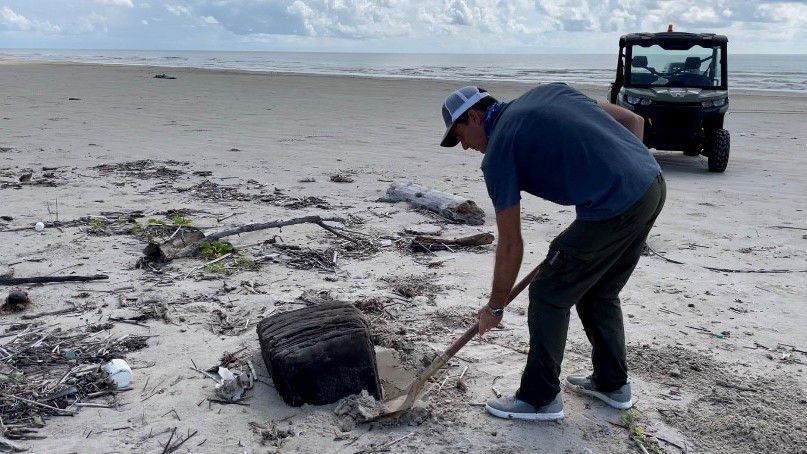 Marine biologist Jace Tunnell survey's a rubber bail that washed up on the Texas shore in this image from August 2021. (Spectrum News 1/Crystal Dominguez)

CORPUS CHRISTI, Texas - Hurricanes in the Gulf of Mexico often trigger strong currents along the Texas coast. Many times objects, mysterious items and marine decay wash onto our shores. For the past couple years, heavy rubber blocks have been washing up on Corpus Christi beaches, and just recently it was discovered where they are coming from.

Jace Tunnell, a marine biologist and director for the Mission-Aransas National Estuarine Research Reserve, often combs through the beaches of North Padre Island to see what he can find. From a message in a bottle to the rib of a whale, he has come across some of the most bizarre things, including a creepy doll head. But most recently it’s the heavy, rubber bails that have his attention. He holds a sliver of one them in his hands and analyzes it.

“It kind of looks like alligator skin or something like that,” he said. “But once you cut into it you can really see where it looks like rubber lining inside of there.”

He said they have found six of the large bails over the last couple years.

They seem to pop up when the currents are at their strongest.

“Especially after storm events [these] things will show up,” he said. “Last summer after Hurricane Hanna came through we found them on Mustang Island.”

After posting his pictures on social media he said he heard back from the Florida Fish and Wildlife Commission.

“He contacted me and said, ‘Hey, those blocks, we are finding them here on the beaches in Florida,’” Tunnell said.

And one month ago the mystery was solved.

"We think we figured out where they came from," Tunnell said.

The rubber blocks are believed to be from a German cargo ship that was sunk by the U.S. off the coast of Brazil in 1944.

“The ship is either rotting apart or somebody’s going down and messing with the ship and these things are boiling up,” he said.

A German cargo ship that was sunk by the U.S. off the coast of Brazil in 1944. It's believed the ship may be where mysterious rubber bails washing up on Texas beaches originated. (Courtesy: Jace Tunnell)

“There’s actually footage from the 1940s with folks in Brazil picking up these rubber bails and putting them in their truck,” he said.