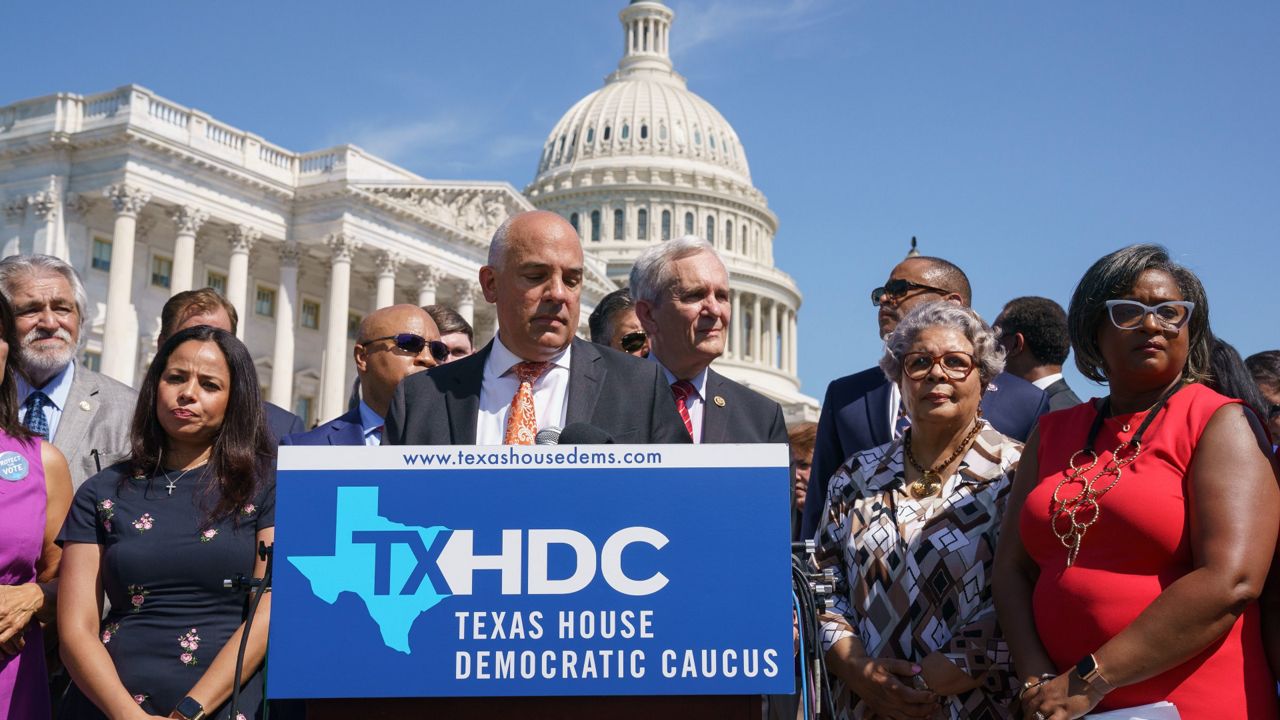 Rep. Chris Turner, chairman of the Texas House Democratic Caucus, center, is joined by Democratic members of the Texas legislature at a news conference at the Capitol in Washington, Tuesday, July 13, 2021. (AP Photo/J. Scott Applewhite)

‘It is a time for bold action’: Texas Democrats address quorum break from Washington

Texas Democrats, a day after fleeing the state for Washington, D.C., in order to block sweeping GOP-backed voting legislation, said President Joe Biden needs an “LBJ moment,” referencing President Lyndon B. Johnson’s March 15, 1965 address to a joint session of Congress in which he urged the passage of legislation guaranteeing voting rights for all Americans.

During a 10 a.m. Eastern news conference, Texas House Democrats admitted their latest revolt, in which they again broke quorum, is just a move to buy time and that their backs remain against the wall.

The plan is likely to wait it out until the end of the current special legislative session on Aug. 7. Democratic lawmakers will need to return at some point, however, and Texas Gov. Abbott has vowed to keep calling special sessions until a voting bill is passed.

“It is time for bold action,” Doggett said.

The cross-country exodus was the second time that Democratic lawmakers have staged a walkout on the voting overhaul, a measure of their fierce opposition to proposals they say will make it harder for young people, people of color and people with disabilities to vote. But like last month’s effort, there remains no clear path for Democrats to permanently block the voting measures, or a list of other contentious GOP-backed proposals up for debate.

“We are here to protect the right to vote for millions of Texans,” state Rep. Rhetta Bowers said Tuesday morning. “We are living on borrowed time in Texas. We can’t stay here indefinitely. We need Congress to act now and pass the For the People (Act).”

State Rep. Chris Turner, chair of the House Democratic Caucus, said letters have been sent directing their voting machines in the Texas House to be locked.

Meanwhile, Gov. Abbott has threatened those Democrats with arrest upon returning to Texas and made to return to the Capitol, though that may not be until the current 30-day special session ends in August.

“As soon as they come back in the state of Texas, they will be arrested, they will be cabined inside the Texas Capitol until they get their job done,” Abbott told ABC affiliate KVUE.

Turner, the Texas House Democratic leader, predicted the Texas Democrats’ efforts would ultimately be futile unless congressional Democrats take bolder action to overcome a Senate Republican blockade of their sweeping voting bill. The legislation, known as the For the People Act, would create national standards for voting that could roll back some restrictions that have been approved or are advancing in the Republican-led states.

The move by Texas House Republicans was expected after Democrats boarded private planes Monday to deny them the quorum necessary to conduct business — namely, passing one of America’s most restrictive voting measures. Other lighting-rod conservative issues that Abbott put on the agenda — including how race is taught in schools and new abortion restrictions — also were shelved with the Legislature now at a standstill.

“A sergeant-at-arms and any officers appointed by him are directed to send for all absentees whose attendance is not excused, for the purpose of securing and maintaining their attendance, by warrant of arrest if necessary,” Republican House Speaker Dade Phelan said.

Shortly after the vote, sergeant-at-arms locked the chamber doors. Four Democrats who did not go to Washington were among the lawmakers still inside, while the voting mechanisms on the desks of absent Democrats were locked.

A spokesman for the Texas Department of Public Safety, which oversees state troopers and the Texas Rangers, did not comment after the remaining House members approved the measure 76-4.

State Rep. Eddie Morales, one of four Democrats who stayed behind, said it was his understanding that troopers would not leave Texas.

Despite the exodus by Democrats, Abbott has said Republicans will not be deterred.

Democrats’ decision to hole up in Washington is aimed at ratcheting up pressure on President Joe Biden and Congress to act on voting at the federal level. Biden is set to deliver a major address on the issue Tuesday in Philadelphia, after facing growing criticism for taking what some on the left call too passive a role in the fight.

The measures are part of the GOP’s rush to enact new voting restrictions in response to former President Donald Trump’s false claims that the 2020 election was stolen. More than a dozen states this year have already passed tougher election laws — but only in Texas have Democrats put up this kind of fight.

Prior to breaking into a refrain of “We Shall Overcome” Tuesday morning, Democrats said they didn’t flee exclusively for fellow Democrats but for all who need to exercise the right to vote.


Abbott said the proposed voting legislation actually makes it easier to vote by expanding early voting hours. In a statement released on Monday, the governor called on Democrats to return to Texas.

“The Democrats must put aside partisan political games and get back to the job they were elected to do. Their constituents must not be denied these important resources simply because their elected representative refused to show up to work,” he wrote.

Abbott punished Democrats after their May walkout by vetoing paychecks for roughly 2,000 Capitol employees, which will begin taking effect in September unless the Legislature is in session to restore the funding.

The Texas House voted Tuesday morning to send law enforcement to track down Democrats who left the state “under warrant of arrest if necessary.” It’s unclear how the move will affect Democrats since Texas law enforcement lacks jurisdiction in Washington.

No quorum present in Texas House…call of the House issued and passed and motion for sergeant at arms to go after missing members also passes by same 76-4 vote. #txlege

But.. Texas law enforcement lacks jurisdiction in the nation's capital.