TEXAS — A majority of Texans believe COVID-19 is the state’s biggest worry today, and 65% of the state supports sweeping reforms such as mask mandates to mitigate the public health crisis, a new Spectrum News/Ipsos poll shows.

Most Texans reported feeling the strain of the pandemic creeping into their everyday lives and their finances, the poll showed. Half of those who reported having a full-time job in Texas said they were struggling to pay their bills as a result of the pandemic.

The Spectrum News/Ipsos poll asked Texans to rate the main problems facing the state and to rate various levels of governments’ handling of the pandemic and other issues of statewide concern. Respondents were also asked about their views on voting in the Nov. 3 election, voting integrity, and how they preferred to cast their ballots.

The poll surveyed 1,000 Texans, ages 18 and up, across the state from Oct. 7 to 14 and had a credibility interval of plus or minus 3.5 percentage points.

While researchers at Ipsos, a nonpartisan market research company, found that COVID was a concern across the states it has surveyed in similar polls, Texans’ ranking of the coronavirus nearly twice as high as other concerns was “really striking,” said Mallory Newall, a research director at Ipsos. 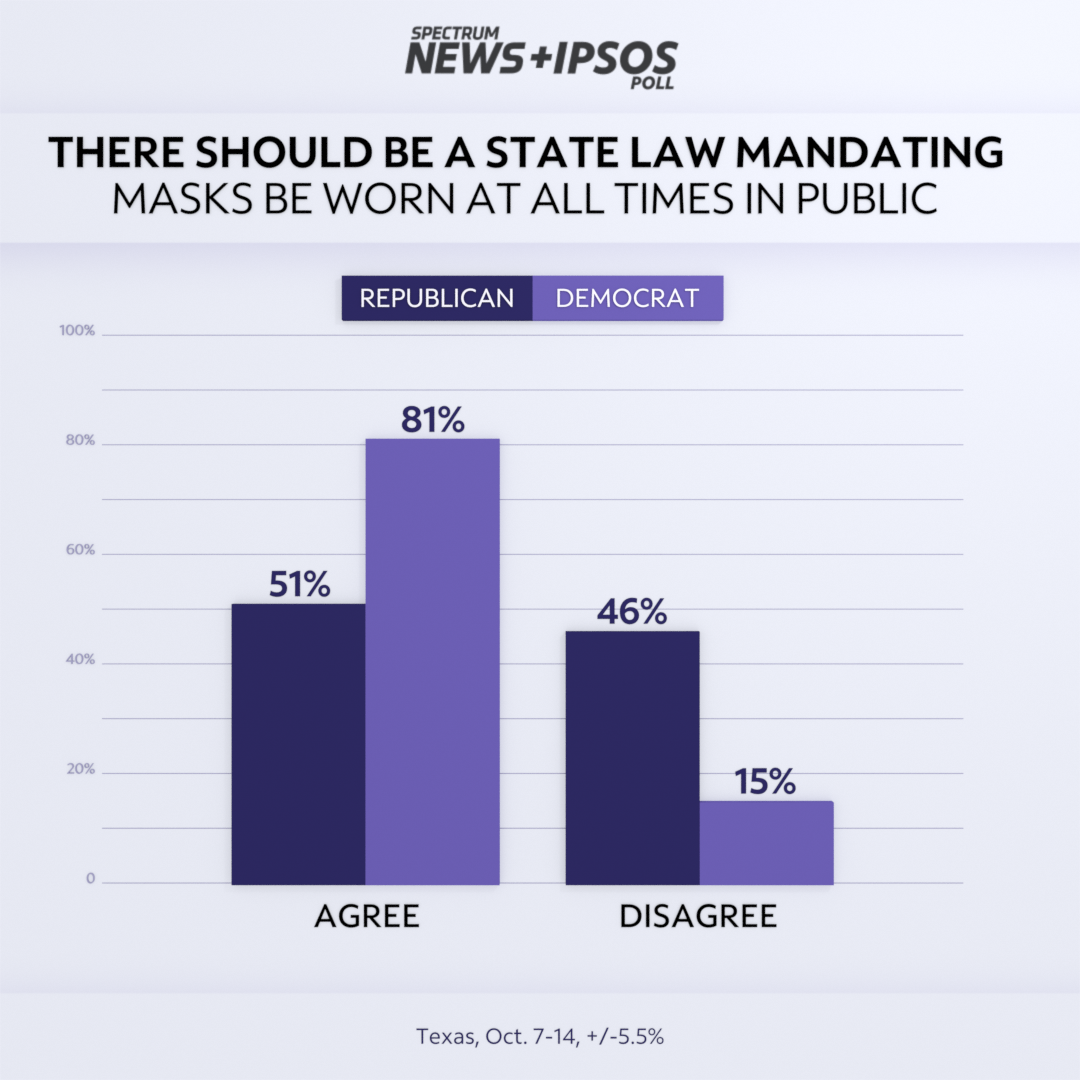 When it came to Texans’ views on ways to mitigate the pandemic’s impact, the Spectrum News/Ipsos poll showed “deep, broad support across demographic groups, across partisan lines, and across racial and ethnic groups for wearing masks in public to keep people safe,” Newall said.

How well did local, state, and federal governments do in the crisis?

Texas was one of the last states to shut down businesses and schools at the start of the pandemic in the United States. Following Gov. Greg Abbott’s guidance, it was one of the first to reopen in May. But a surge in infections and hospitalization in late June brought Texas into the national spotlight as a hot zone and drove Abbott to issue a statewide mask order and place more restrictions on business operations.

Today, 48% of Texans said they approved of Abbott’s handling of the crisis, while 43% disapproved, according to the poll.

When it comes to the federal government’s handling of the pandemic, 61% of Texans said they felt just fair or poor regarding how Washington had responded to the crisis.

And about that election in two weeks…

Texans said they are likely to vote in this year’s presidential election: 72% compared to 20% saying they are unlikely to vote. Another eight percent have already voted.

Twice as many Texans said they preferred to vote in person instead of by mail, whether in early voting or on Election Day. Motivation to vote in person may stem from Texas’ strict regulations on who is eligible to vote by mail, a regulation 56% of Texans said they would support expanding to allow all voters to cast mail-in ballots without an excuse. 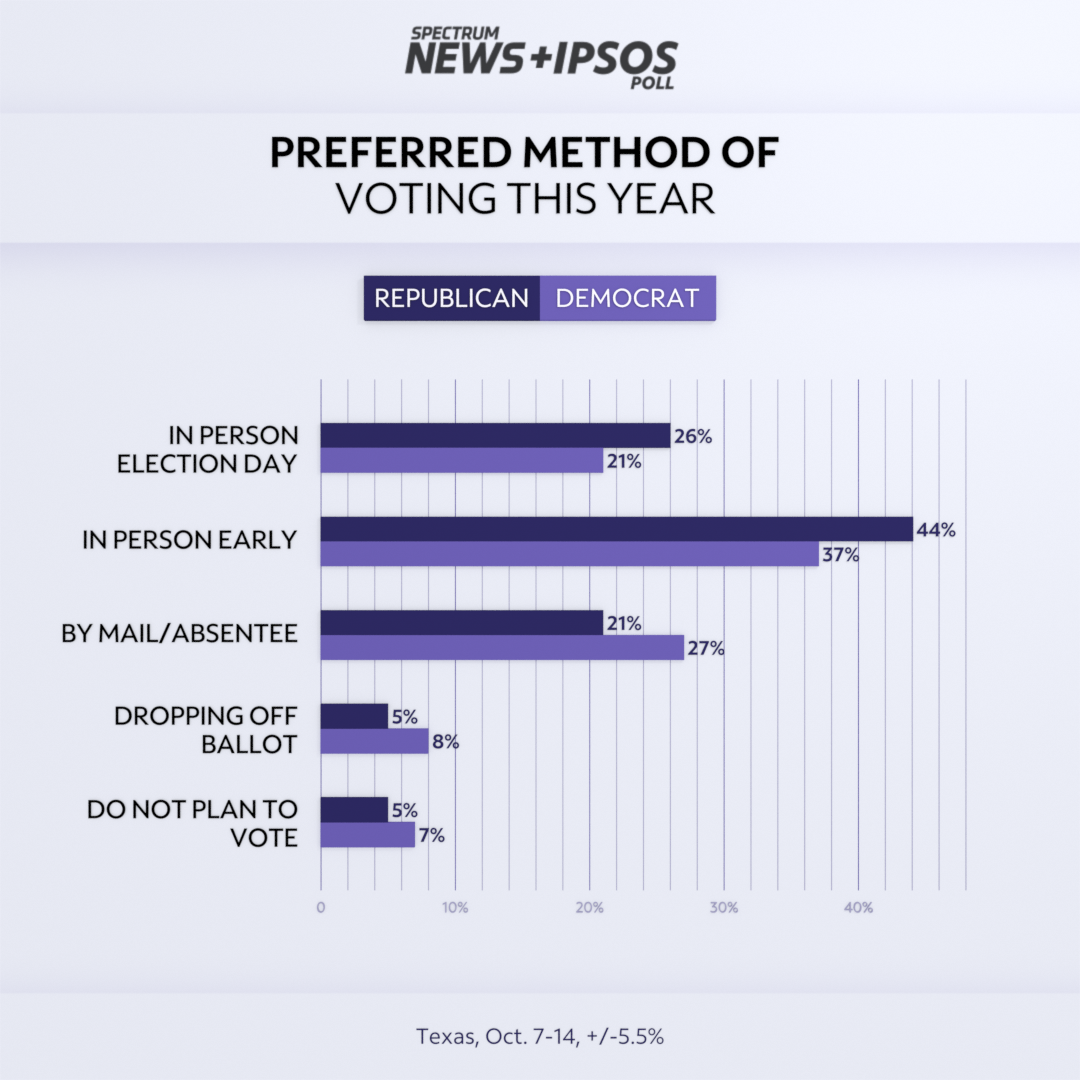 Currently, in order to qualify to vote by mail in Texas you must by 65 or older, sick or disabled, out of the county during the election period, or in jail but otherwise qualified to vote.

“Concerns about election integrity have definitely seeped into the public writ large; however, these concerns vary at the moment by party identification,” Newall said.

The partisan levels of concern show “how the messaging about mail voting fraud coming from Pres. [Donald] Trump and others in his party are permeating within the Republican base,” she added.