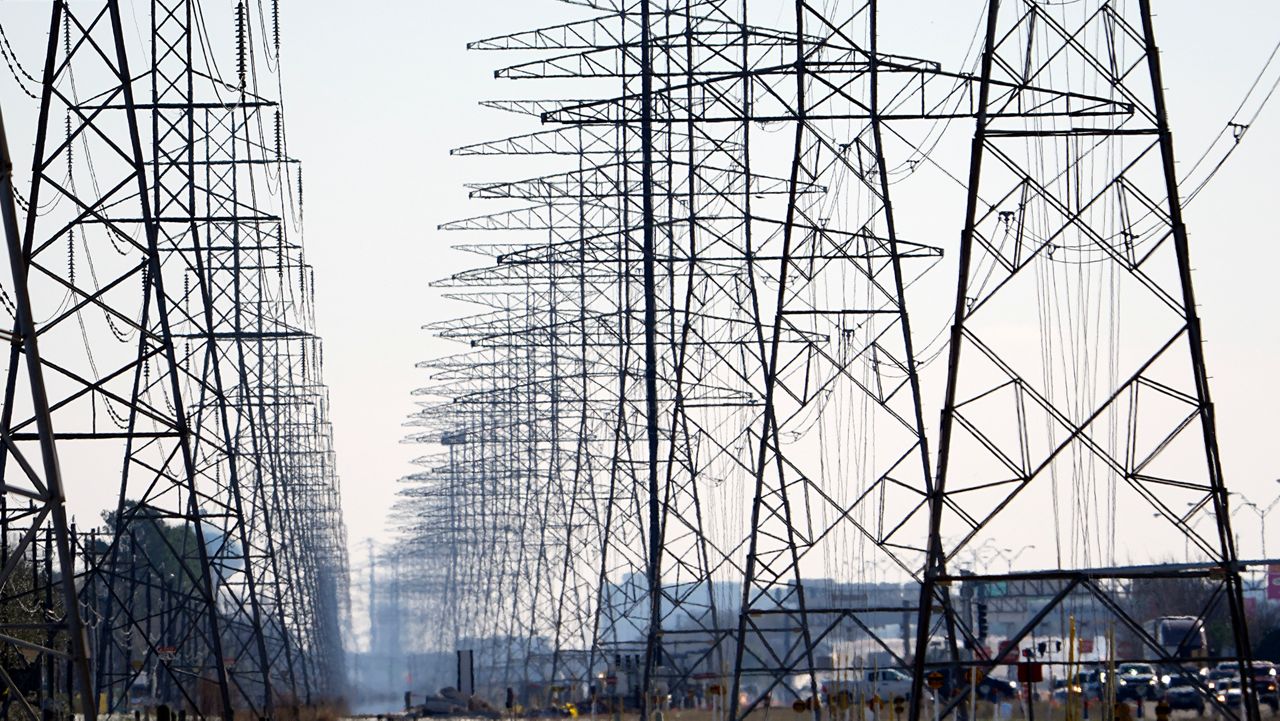 Power lines are shown Tuesday, Feb. 16, 2021, in Houston. More than 4 million people in Texas still had no power a full day after historic snowfall and single-digit temperatures created a surge of demand for electricity to warm up homes unaccustomed to such extreme lows, buckling the state's power grid and causing widespread blackouts. (AP Photo/David J. Phillip)

State Agency's Failure May Cause Electricity Rates to Rise

AUSTIN, Texas — As millions of residents throughout the state remain without power for a second straight day, many could be charged higher fees for electricity they can’t currently access.

The Electric Reliability Council of Texas (ERCOT) — a membership-based non-profit that manages the flow of 90% of the state’s electricity — declared a state of emergency on Monday.

In a complex cascade of state actions, the Public Utility Commission of Texas, which oversees ERCOT, ordered the organization to take steps to address the state’s critical lack of power supply. In that series of events, the agency also granted ERCOT an exception that has consumers worried their electric bills might reach staggering new heights.

Outside of Texas’ energy grid exists a cottage industry of power producers that either don’t generate anything at all or create energy for some other source. When ERCOT declared its state of emergency Monday, it opened up a kind of retail auction for power companies. Usually, prices for power generators are capped at $9,000 per megawatts per hour, according to state regulations.

One result of ERCOT’s actions uncaps that number — ostensibly to encourage energy producers to sell them more juice.

“Energy prices should reflect scarcity of the supply,” the order reads. “If customer load is being shed, scarcity is at its maximum, and the market price for the energy needed to serve that load should also be at its highest.”

Bruce Bullock, the director of the Maguire Energy Institute at Southern Methodist University, said that people who have fixed-price electric plans need not worry, but others might see a rate increase.

“Some people may see increases in bills,” he said. “Some people will not. If if there are consumers that are on so-called variable rate plans where their rates change on a daily, monthly, weekly basis, depending upon their particular electric provider, [the provider] can adjust prices according to what the wholesale market does. That could be passed through to [consumers].”

There is some consumer protection in the PUC’s order, though it is unclear as to how it would actually work. In the second part of ERCOT’s dual actions on Monday, the organization suspended the low-end cap on energy prices — calculated at roughly 50 times the price of oil.

“This outcome would be contrary to the purpose of the rule, which is to protect consumers from substantially high prices in years with substantial generator revenues,” the order reads. “It would make little sense to expose consumers to prices that are higher than the usual maximum price after a generator revenue threshold has been achieved.”

In a statement to Spectrum News 1, Kayleigh Date, the press secretary for the state’s attorney general, said that her office could not comment on, confirm, or deny potential or pending investigations on price-gouging.

“High prices alone do not mean that price gouging has taken place, as businesses are generally allowed to determine the price for their products,” she said. “However, if a disaster has been declared by the Governor of Texas and businesses raise the price of their products to exorbitant or excessive rates to take advantage of the disaster declaration, then it is quite likely that price gouging is taking place, and a complaint should be filed with our office concerning the incident.”

One of the state’s biggest problems in its current crisis, Bullock said, was that so many natural gas lines have become frozen and can’t produce. Had ERCOT been able to access the 29,000 kilowatts of power from natural gas plants that aren’t operating, this crisis could have been averted.

“The demand is so high for it right now, and it's being diverted away from power-generation to the heating market because people need heat — which is kind of a false choice because most people’s furnace won't work without electricity, too. We've got to find out why we lost that significant chunk of a generation.”

One of the issues plaguing ERCOT, he said, was the proliferation of energy companies on the market after it was deregulated — meaning it’s incumbent upon private companies to make sure the grid has enough energy to power the state.

“The task is certainly not not simple,” he continued. “You have something that, at most, occurs once every 10 years. The state and other officials that are involved in this have to make a decision: ‘Are, are we going to spend the money for something that occurs every 10 years? And, if so, who's going to pay for it?’ ”

Gov. Abbott declared on Tuesday that reforming ERCOT was an emergency agenda item this legislative session.

“The Electric Reliability Council of Texas has been anything but reliable over the past 48 hours,” he said in a press release. “Far too many Texans are without power and heat for their homes as our state faces freezing temperatures and severe winter weather. This is unacceptable. Reviewing the preparations and decisions by ERCOT is an emergency item so we can get a full picture of what caused this problem and find long-term solutions. I thank my partners in the House and Senate for acting quickly on this challenge, and I will work with them to enhance Texas’ electric grid and ensure that our state never experiences power outages like this again.”

ERCOT failed to respond to numerous calls at the time of this story's publication. Tuesday night, Capital Tonight will interview Andrew Barlow of the Public Utility Commission about the situation, airing at 7 p.m. and 11 p.m.