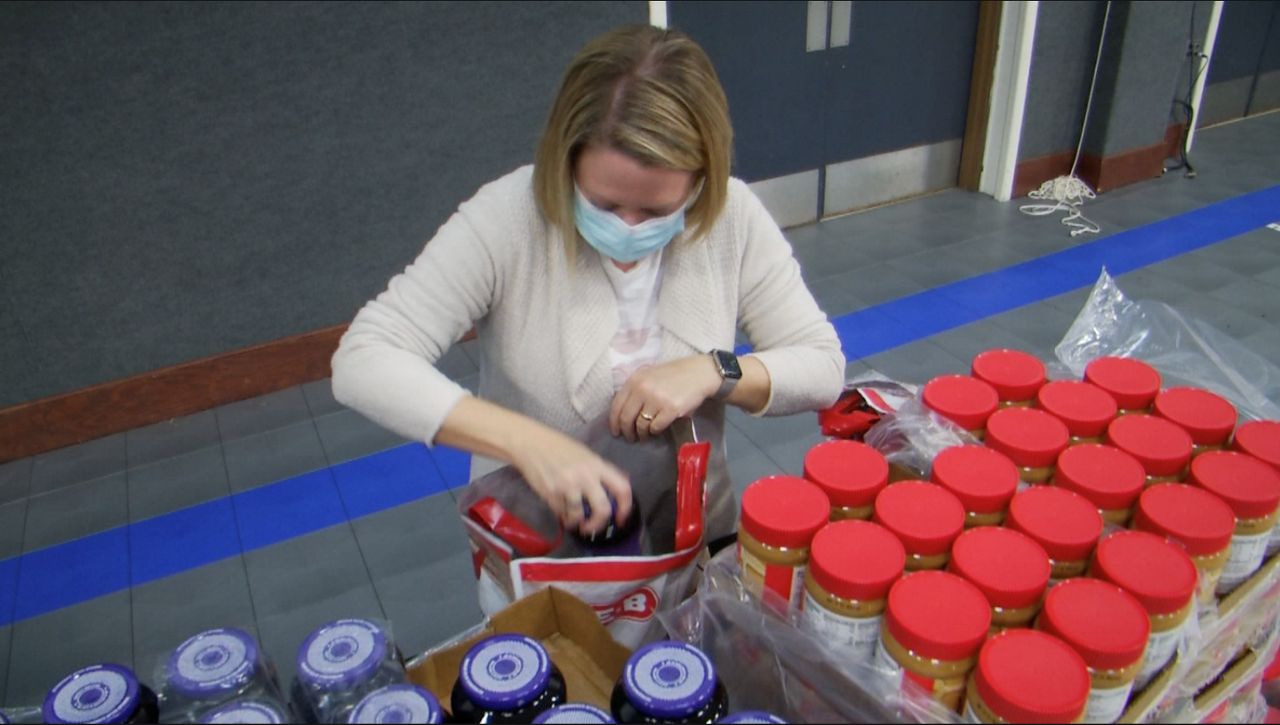 Volunteer packs food to be given to families in need. (Spectrum News 1)

AUSTIN, Texas – Even though emergency Supplemental Nutrition Assistance Program - or SNAP - assistance has been extended by the state of Texas, there are still countless families in the Lone Star State being forced to seek out additional assistance from food pantries and meal assistance programs.

Every Friday, King’s nonprofit sends meal kits home with children identified by the Austin Independent School District as food insecure. It’s enough food to feed a family over the weekend, while children aren’t receiving a meal at school.

“There are programs out there that do what they call backpack programs,” explained King. “So they’ll send a backpack home with the child for the weekend that’ll have a couple bowls of mac and cheese, some granola bars, things like that - but it just feeds that one child for the weekend. We focus on the whole family.”

Families are given a bag of non-perishables, as well as meat and eggs, based on a menu of recipes for that particular weekend. King said the need for their services has ballooned since the beginning of the pandemic.

“We have a little more than quadrupled in size since COVID started,” said King. “We’re anticipating doubling again this year – at least doubling again.”

Hungry Souls has a waitlist of nearly 200 families waiting to access the small organization’s services. King said he doesn’t want to overextend the nonprofit and promise families food that he doesn’t have the ability to feed.

King said many of his clients have experienced difficulties applying for SNAP benefits, but he said a lot of his clients are already enrolled in the assistance program. Even with SNAP, families are still hurting.

“We’re kind of the resource of last resort,” said King. “If they still need help on the weekends after taking advantage of other programs, we’re there to help fill that gap.”

According to numbers from the Texas Department of Health and Human Services, there are more than 200,000 additional families enrolled in SNAP benefits in Texas as compared before the pandemic, jumping from 1,427,440 cases in February 2020 to 1,635,849 in December.

Grandparents are the fastest growing portion of Hungry Souls’ client base, stuck caring for grandchildren while parents are out working to make ends meet.

“They’re on a fixed income, and they may not necessarily qualify for SNAP because they make too much, but they don’t make enough to feed three kids on top of - you know - with their Social Security benefits,” said King.

The increased demand for help has consequently led to the need for additional food and finances to help Hungry Souls meet the growing needs of the community. King said the face of hunger is changing in Austin, and knows no boundaries - part of the reason that addressing food insecurity in Texas’s capital city is no easy task.