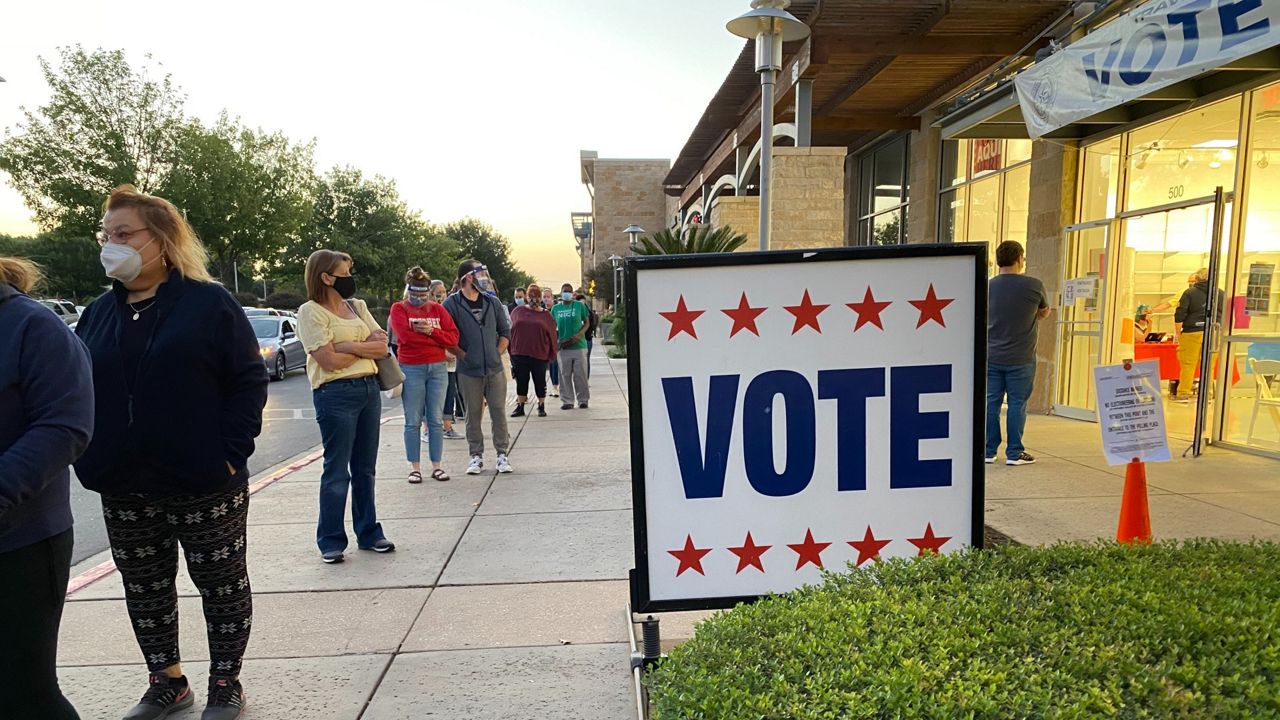 AUSTIN, Texas — Texans turned out in droves on this first day of an extended early voting period. Long lines formed even before the polls opened on Tuesday, and tens of thousands of people casted their ballots across the state in what's expected to be competitive races up and down the ballot. While many voters had to wait at least an hour, some say it was time they feel was well-spent.

One Texas woman was determined to be among the first in line on day one — no matter what.

Tuesday morning, Dominique Oxner was up at 5 a.m. After giving her cats some treats and making coffee, she was eager to get out the door before 6. With the sun still not up, the 32-year-old knows all about the “hurry up and wait” mentality.

“Growing up as a, as a millennial, we waited in line for stupid stuff like N’SYNC CDs. We waited for Harry Potters books. We camped out in front of stores for new tickets. And I just figured this is a little more important,” she said. 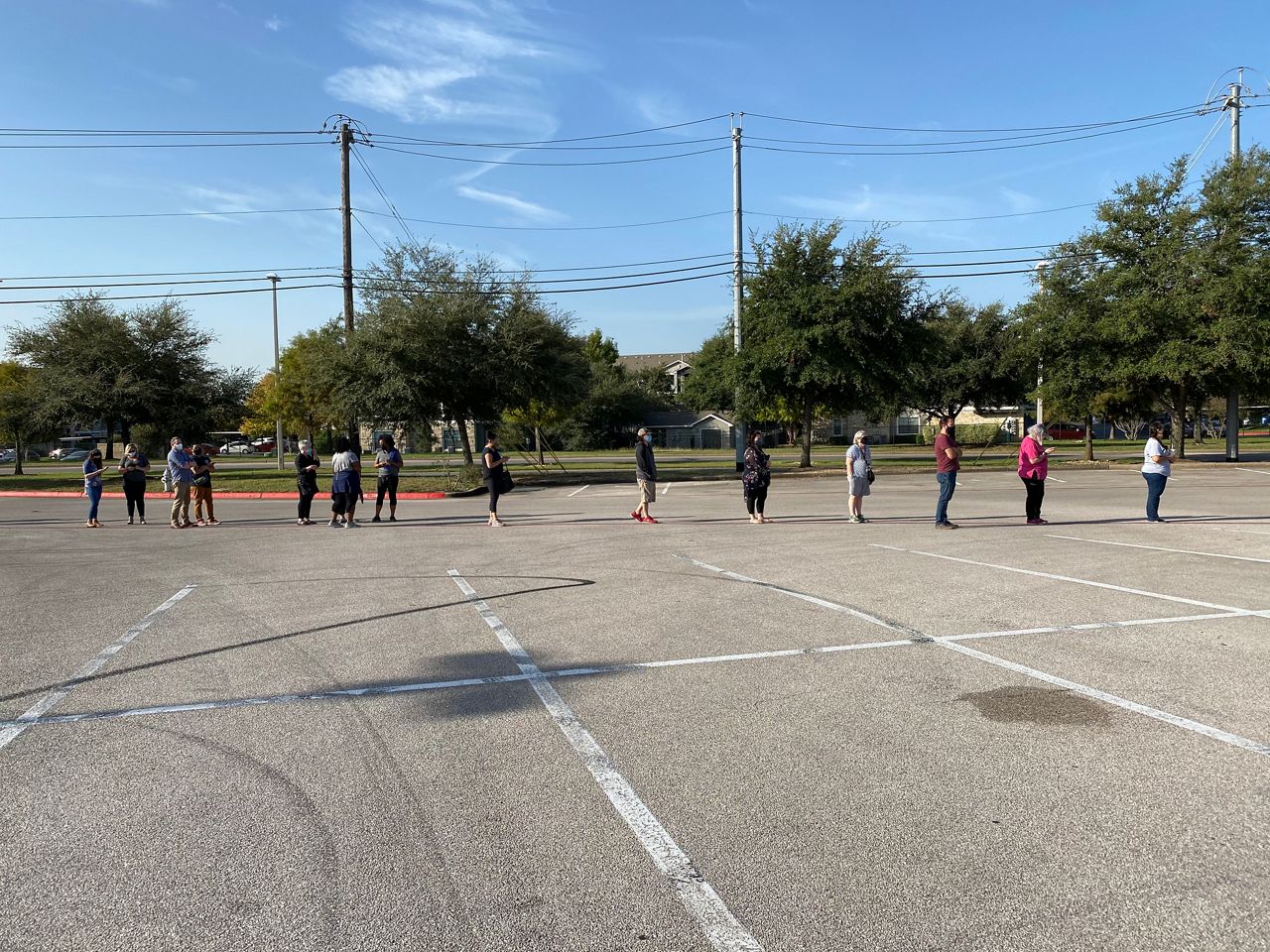 Oxner drove to Southpark Meadows, where she fully expected on the first day of early voting for there to be a line, and she was right.

“I absolutely love the fact that I got here and there were people,” she said while she walked towards the back of the line, which was starting to wrap around the building.

There were more than two dozen voters already there, waiting in the dark hours before polls opened at 7 a.m.

“I’ve been saying for months that this is important to me. If I put it off til the last minute or didn’t do it at all that would make me a massive hypocrite, obviously, and it would leave me with four years of regret, no matter what the outcome was,” Oxner said.

By sunrise, polls were open for about 30 minutes and the line snaked behind the building and into the back parking lot of the complex. Voter Greg Trosclair brought a book, ready to wait as long as he needed to. After voting in Travis County for nearly 25 years, he said he has not seen an early voting line this long, and this is during the coronavirus pandemic.

“If you don't make a statement, whether you believe in Republicans or Democrats points of view, it doesn't matter. You know, this is what matters. It matters that we come out and we vote,” Trosclair said.

Among the dozens of people ahead of Trosclair on the queue was Karina Haro, who like many here felt it was her responsibility to vote. She said seeing the show of people there was “astonishing” and ended up waiting over an hour with her husband. The 24-year-old said she felt safe voting early in person during the primary, and still does now after seeing the safety protocols in place inside the polling site.

“It was great. There was not that many people in there. The whole process went really fast. So, once I entered the building, maybe five, seven minutes, and I was done,” Haro told Spectrum News after she voted.

There are 18 days of early voting in Texas this year, under an executive order by Gov. Greg Abbott. The extra five days was meant to try to provide some distance at polling places due to the public health crisis.

“It started off with a gigantic surge in voters. All that pent up demand that you've been feeling for voters, we saw it full face this morning with lines forming even as early as five o'clock this morning in one place where I was, with reports of people camping out as of 10:45 (Monday) night at Southpark Meadows,” County Clerk Dana DeBeauvoir said.

DeBeauvoir said she expects turnout this year to reach new highs, as mail-in voting has already has almost quadrupled the record. She attributes the long lines to the sheer volume of voters. Travis County usually has 30 polling locations for early voting, but in 2020 there are 37.

“We regret that some people are having to wait in a long line. We would encourage them that they don't really have to wait, they can come back tomorrow, they can find another location that's not as crowded. Or they could just stick to their guns and make sure their ballot goes in the ballot box. We applaud them for their tenacity,” DeBeauvoir said.

As for Oxner, a change to the morning routine was worth the opportunity to participate in democracy.

“It’s good to know that I did something to make my voice heard,” Oxner said.