Protesters demonstrate police brutality in front of Dallas City Hall in downtown Dallas, Saturday, May 30, 2020. Protests across the country have escalated over the death of George Floyd who died after being restrained by Minneapolis police officers on Memorial Day. (AP Photo/LM Otero)

DALLAS – There's a new report out of Dallas detailing how the police department handled the George Floyd protests from May 29 to June 1.

The 85-page “After Action Report” points out a lack of planning and communication, and in response, the department will be rolling out new guidelines like when tear gas is authorized for use, what additional training is needed for mass arrests and how body-worn cameras can be utilized more effectively.

The report revealed that the Dallas Police Department, in a partnership with the Office of Community Police Oversight, is investigating around 50 “Use of Force” complaints for how its officers handled crowd control. Details of these complaints were not included in the report and won’t be available for review until the various investigations are completed.

Police Chief Reneé Hall said the report provides a roadmap for change and improvement, but not before it outlines a critical analysis of the "errors and shortcomings" by the department during the protests.

“The report, I hope, reflects our commitment to transparency, integrity, and critical analysis of our own actions during this difficult period of time,” Hall said. “Council members and the public will learn all that we know now about what happened and why, including errors and shortcomings in our service during the protests. We can only move forward if we understand everything that happened.”

According to the report, in the four days of protests: two citizens and six officers reported serious injuries, a police horse was seriously injured, and three police vehicles were burned and many others vandalized. The initial damage estimate is more than $5 million in property destruction in the central business district and DPD incurred costs of about $3 million. The cost from the looting and thefts has not been assessed yet.

One of the main internal criticisms listed in the report was a “breakdown in communications" over the weekend. Officers reported conflicting commands given over several forms of communication (in person, via cellphone, or over the radio). This meant officers would get multiple sets of orders which led to losing track of resources.

"The impact of last-minute modifications to operational directives increased the risk to officers' safety as the process was prolonged, damaged morale, and compromised the expectation of professionalism the community demands,” the report reads.

Notably, Hall didn’t communicate to her officers that they were to show a "zero-tolerance policy" toward acts of violence, destruction of property, or civil disobedience and curfew violations until Sunday afternoon — the third day of protests. The report states this addition was extremely important, as it actually clarified the expectations on how officers should engage with violent protesters.

“Our basic temperament, normal temperament with our peaceful protesters is to support that action. What we had seen over the past two days was not a peaceful protest. There was violence, there was looting, and officers didn’t make arrests. However, there was a national narrative, as well as a local narrative about officers making arrests and using less-than-lethal force.” Hall said. “So the officers were concerned about whether or not their actions were going to be scrutinized. And at that point, as the leader of this organization, I made crystal clear that our job is to maintain safety and order in the city and that we would not tolerate any violence, any looting, any destruction of property moving forward… It’s not necessarily about using force, it’s about making the arrests so that this behavior would not move forward.” 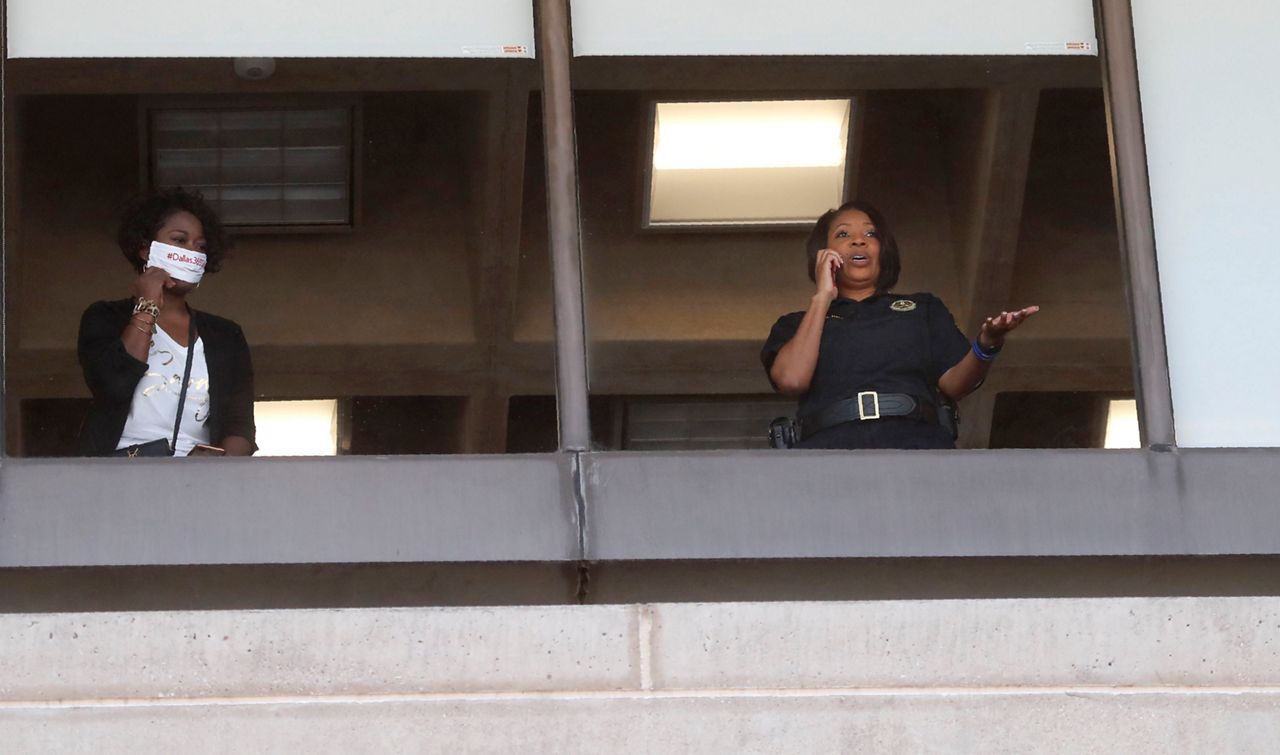 Dallas Police Chief Renee Hall, right, looks on from a window as protesters gather in front of Dallas City Hall in downtown Dallas, Saturday, May 30, 2020. Protests across the country have escalated over the death of George Floyd who died after being restrained by Minneapolis police officers on Memorial Day. (AP Photo/LM Otero)

During a virtual Public Safety Committee Meeting Tuesday,  council members grilled Hall about the report and her handling of the weekend’s events. One of the most heated discussions during the meeting was over DPD’s use of tear gas when hundreds of protestors took to the Margaret Hunt Hill Bridge, a Dallas landmark, the night of June 1. The report states 674 people were taken into custody who had previously been warned they would be arrested for trespassing on the bridge, but they were released.

"The protestors made it onto the bridge and the decision was communicated to arrest the violators,” one commander’s account reads in the report. "After arrests were made, it was communicated that all protestors would be released without any charges. Shortly afterwards, word was received to release the protestors but get their information so that charges could be filed on a later date. Ultimately, no charges were ever filed.”

Initially, it was said police did not use tear gas on the bridge, but that was widely disputed by protesters' firsthand accounts. In this report, it’s been confirmed four cans of C.S. gas were used, along with a smoke canister to create a barrier between protesters and law enforcement. During the meeting Tuesday, a few council members questioned why it took so long to get that concrete answer after several conflicting reports. A couple council members even stated they had lost trust in Hall for this back and forth.

District 2 council member Adam Medrano echoed Narvaez, saying "I believe that I'm in that same boat that the trust was lost after I read this report."

A department slide show released with the report indicates that due to increased tensions, violent rhetoric on social media, and direct threats against police throughout the weekend, police response was increased day by day. The report states once it was recognized that “demonstrators' intentions had shifted from peaceful protests to violent riots, officers responded to the assaults by deploying less-than-lethal munitions.” The slide show estimated the amount of munitions used was 317 hand deployed (like tear gas and smoke canisters), 335 40mm deployed (like foam batons and flash bangs), 33 pepper balls, 35 40mm “stingers” (rubber balls), three Tasers, and four pepper sprays.

"A specific observation was the impact encounters between protestors and officers had on the tone of the event and the amplification of violence that occurred when individuals taking advantage of the protests worked to incite the crowds,” the report states.

“It’s clear to me that we did have, indeed, a failure of leadership,” said deputy Mayor Pro Tem and committee chair Adam McGough. "At the source of many of our issues as it relates to the community and law enforcement is trust. And in many cases the lack thereof. Trust is built over time, and it starts with relationship, transparency and consistency. Our officers have spent real dedicated time and energy to form great relationships in many cases and for years, have been dedicated to productive community engagement. However, the communication that has taken place through the protests, directly after the protests, and in the over two months since the event took place, have served to further erode trust instead of building the trust we so desperately need. There are many things I was looking for in this after action report and I'm left with many unmet expectations."

Because the “Use of Force” complaints are still under investigation, much of the specific interactions between law enforcement and protesters are not documented in the report. District 7 council member Adam Bazaldua said that lack of detail is what most concerned him. He felt the report painted a "biased picture,” which played out in a heated exchange with the chief during the meeting.

“[The report] highlighted a lot of threat that was made against police and lacked a lot of detail on many instances that have already been highlighted of force that was used against the public,” Bazaldua said. “I think that this report is also too little, too late. When we get this, it seems reactionary because of the lack of details on what, to me, is the most concerning.”

Chief Hall said to Bazaldua that this report is a “clear critique,” saying it provides a transparent picture due to the inclusion of officers’ statements and the acknowledgment of some of the department’s missteps. She said the after action report is meant to analyze the department's actions and what needs to be corrected.

“If you’re going to talk about how you’re going to correct yourself, let’s be transparent with what you have to correct. We need to hear and see what occurred over the weekend and it has not been clearly painted as a picture in this report,” Bazaldua responded. “This report is something that paints a very biased picture to the public that is a narrative that is absolutely disingenuous and not fair.”

“I respect your perspective council member, but I think we’re going to respectively disagree,” Hall responded.

Chief Hall has already made changes to how protests will be handled in the future. In June, she formalized a “duty to intervene” policy, which requires members of DPD to either stop or attempt to stop another employee when force is being inappropriately applied or is no longer required. In the matter of using less-than-lethal tools, firing pepper balls and rubber bullets into a crowd is now prohibited, and the use of tear gas requires her authorization and can’t be used to direct a crowd’s movements. An additional 500 body-worn cameras will be purchased to cover all public-facing officers.

Despite the promise of change, the overall tone of the committee members and council members in attendance Tuesday was very critical, with one member going so far as to say the situation has been an embarrassment for Dallas.

“I am a strong supporter of our first responders and I thank them for the difficult and important work they do every day,” District 12 council member Cara Mendelsohn said. "But it's clear that without the direction, they can't perform properly. And had they received clear direction to help the protesters exercise their First Amendment right to protest, then we would have had a very different outcome for our downtown area. We would have had residents that were safe, we would have had businesses unharmed. And I'm very concerned with how this all happened. And what I've seen throughout this entire report is a lack of leadership, and this has been an embarrassment to our city.”

When asked what grade Chief Hall would give herself for her leadership handling the George Floyd Protests over the weekend, she said a C-.