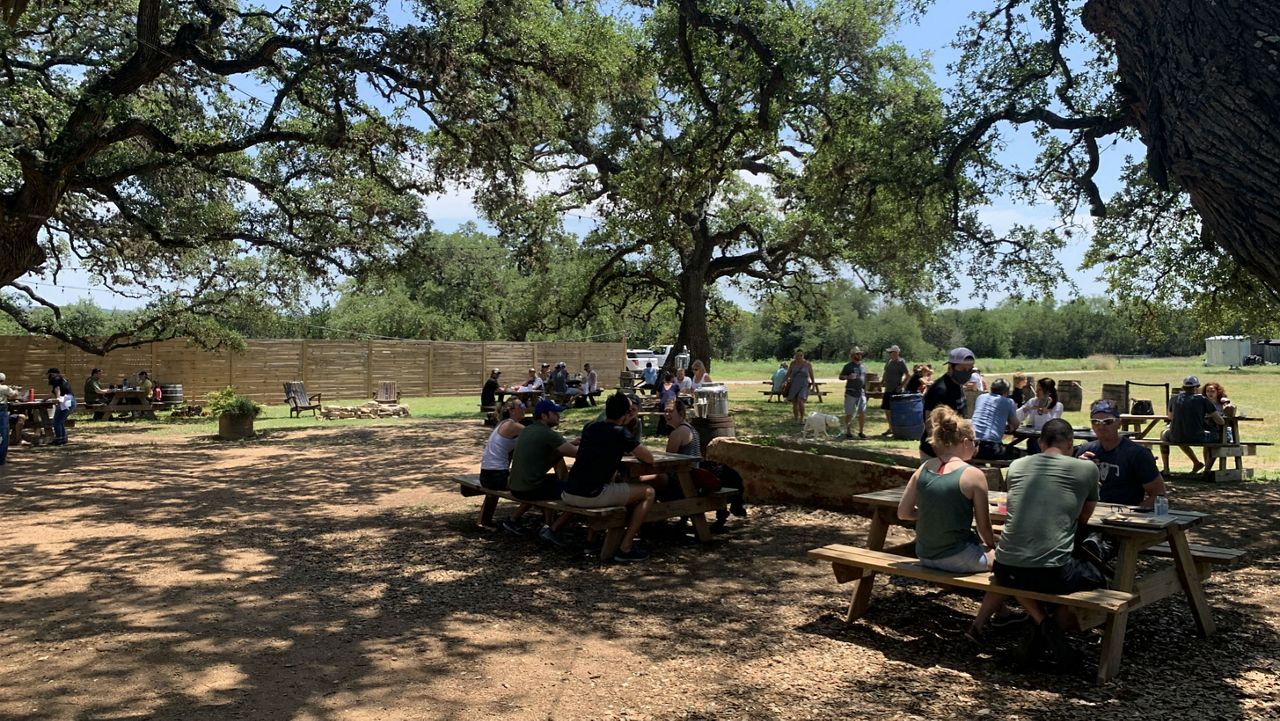 Distillery patrons sitting at tables that have been moved apart to fit with social distancing guidelines. (Spectrum News)

AUSTIN, Texas – After Gov. Greg Abbott’s stay-at-home order expired this past Friday, Texas entered Phase 1 of the governor’s plan to reopen the economy, with restaurants and many retailers allowed to operate at 25 percent capacity.

But reopening looks different for each business, including Treaty Oak Distilling in Dripping Springs.

“It’s been quite an evolution of blood, sweat, and tears to reach the point that we’re at now," said Nate Powell, co-partner of Treaty Oaks Distilling.

From a garage in North Austin to more than 20 acres in Dripping Springs, Treaty Oak Distilling is a small Texas business that has come a long way.

“That's more rewarding than what you see here on the property and all the infrastructure and the hospitality side, is what we've seen internally in relationships and the bonds that we've forged together as a team kind of getting to this point," said Powell.

But due to the COVID-19 pandemic, they had to make big changes to make ends meet.

“The distillery became a hand-sanitizing facility, literally overnight. And the property itself became a grocery store and a to-go delivery service," said Powell.

Those changes allowed them to keep their core, salaried employees working, but they had to furlough most of their kitchen and service staff. Now, though, they’re beginning to hire some back.

“Bringing back some of those employees felt amazing to us, and, you know, again that’s to the credit of our fans who come back and support us," said Powell.

Powell says they are operating at 25 percent capacity per state guidelines. For Treaty Oak that’s about 200 people, but they haven’t hit that cap yet.

RELATED | As Restaurants Reopen at 25% Capacity, Some Say it's Not Worth it

“Frankly, I thought we'd be turning people away because everybody's just so ready to get out. That wasn't the case, actually. We've kind of crept up on capacity but haven't quite gotten there," said Powell.

“It’s nice not to be cooped up in the house anymore, it’s a beautiful day out, so we’re actually able to take advantage of it. It’s pretty nice," said Hunter Norwood, a Dripping Springs resident who stopped by Treaty Oak Distilling Sunday afternoon.

Operating safely at 25 percent is a lot easier for Treaty Oak than other restaurants.

“We’re a 28-acre park, so we can survive much better at 25 percent than probably a restaurant in downtown Austin can and only has, you know, 40 or 50 tables," said Powell.

Powell though doesn’t think they’ll be pushing to bring in any more customers anytime soon.

“You know, right now if we added another 20 or 30 tables we would still be far below 50 percent, but I think that's a very comfortable level that we would be at in terms of our staff and kind of waiting to see what happens with the numbers," said Powell.

As long as the increase in COVID-19 cases per day stays steady or goes down, Powell says, “We feel very confident and comfortable that the safety measures are there in place, and we’ll just take it one day at a time and see how things go."