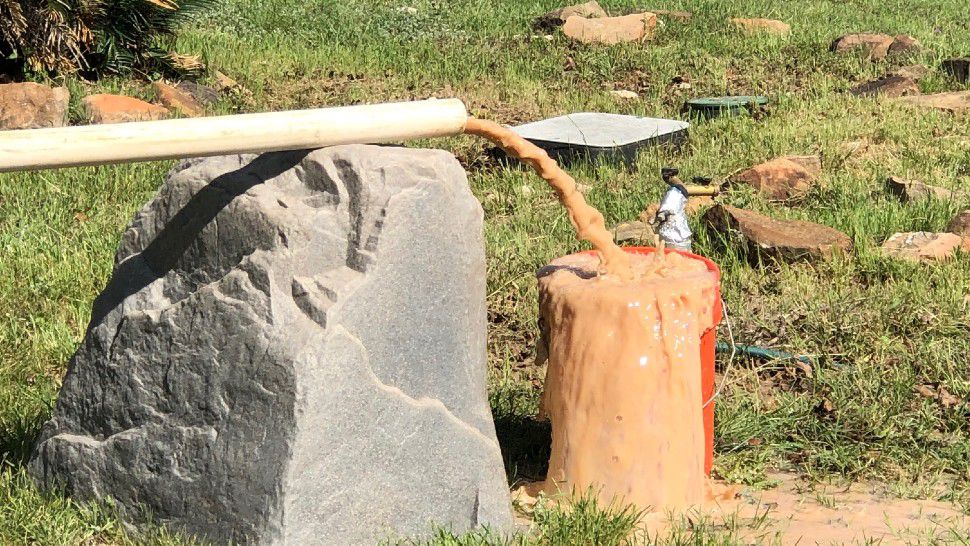 Contaminated water comes out of a Blanco County, Texas, well in this image from April 2020. (Courtesy: Teri Albright)

BLANCO COUNTY, Texas -- Development of the 430-mile Permian Highway Pipeline continues to be controversial in the Texas Hill Country.

Three weeks ago, an accident at a drilling site on the Blanco River spilled about 36,000 gallons of drilling fluid into the Trinity Aquifer, and neighbors say they’re still dealing with contamination.

It's been particularly hard on a couple who is now dealing with two crises at once.

“It’s just a beautiful piece of quiet country, with beautiful views and the river, and the small-town atmosphere," said Teri Albright, who lives with her husband, Milton Shaw, on 18 acres in Blanco County.

Both are lifelong Texans and say there's something special about the serenity of living in the Hill Country.

"Our hearts are with the Central Texas area," said Albright. "And it's really frightening and sad to see it getting torn up so." 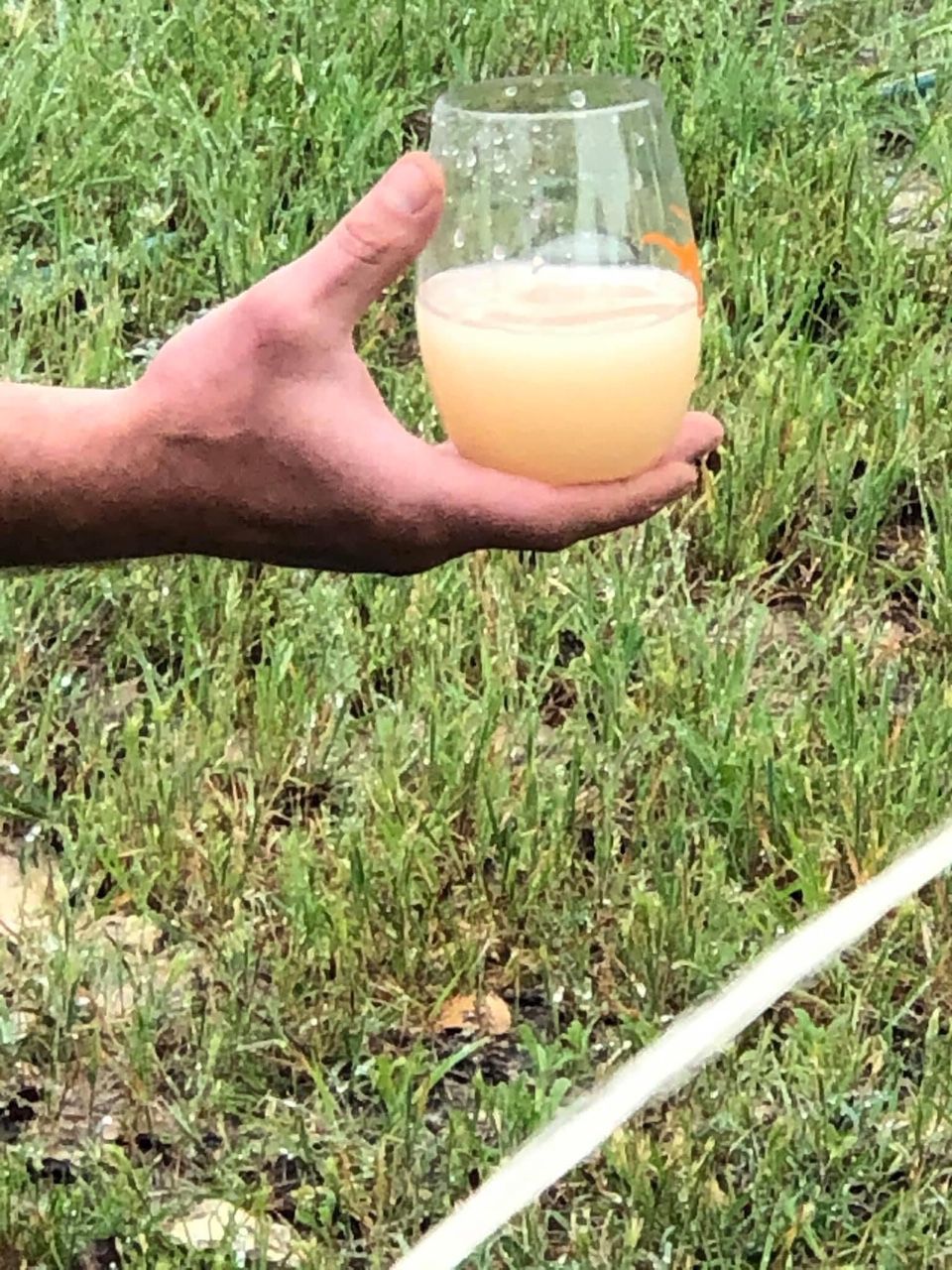 Water from a well appears cloudy in this image from April 2020. (Courtesy: Teri Albright)

Their front porch is about a mile away from the path of Kinder Morgan's Permian Highway Pipeline.

“We can see the whole thing going on. They had massive lights on and stayed on all night long, and lots of noise and drilling sounds," said Albright. "They laid pipe all the way across the field in front of us, so you know, we knew they were there. We just didn't know that they started drilling into the river.”

On Saturday, March 28, Kinder Morgan was drilling where the pipeline is set to cross the Blanco River. But after hitting a karst, or a void, in the rock, 36,000 gallons of drilling fluid spilled into the Trinity Aquifer.

"Sunday night I turned the faucet on, and mud, liquid, I mean just muddy mud water started flowing out of the faucet," said Albright.

The problem persisted for hours, then days, and soon Albright realized she and her husband weren't the only ones with the issue.

"One of my neighbors contacted me and said her water turned muddy, so we knew it wasn't just my well. And that led to several of the environmental groups getting involved," said Albright.

They then brought the problem to Kinder Morgan, and that's when, "We found out that they had had this accidental spill into the aquifer," said Albright. "They didn't notify the Railroad Commission until Tuesday afternoon, after we had confronted them." 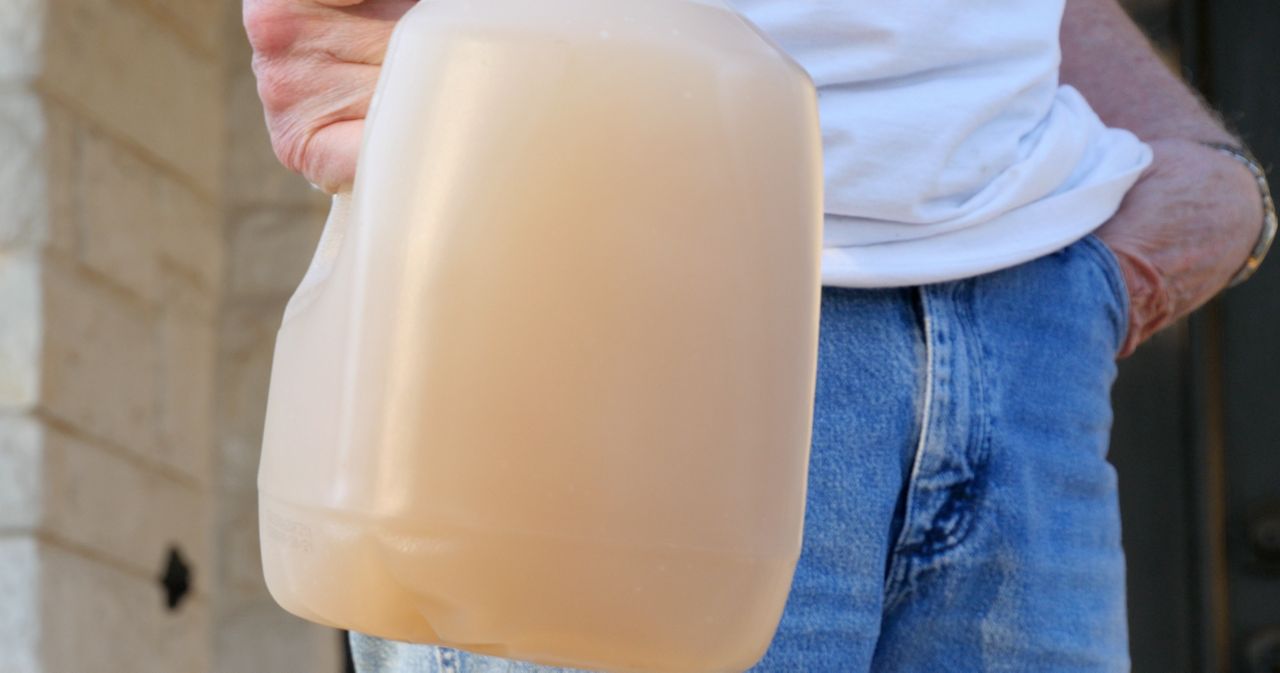 Well water in Blanco County appears cloudy with setiment in a jug in this image from April 2020. (Courtesy: John Brown)

Fore added that the company is reviewing its reporting process internally in response to the incident.

Nonetheless, after the accident, Albright and her husband didn't have running water for nearly two weeks.

“We’re on a well out in the country. That’s our sole source of water, and it was gone, unusable," said Albright.

She says for a few days Kinder Morgan supplied them with bottled water.

"There were four impacted landowners," said Fore. "And we have been working with each of these folks, from anywhere immediately around the incident, food or water, other items we could provide, and continue to do that - anything related to our project that impacted the water of these individuals, these four individual either land owners or tenants, is attributable to us. We want to make sure that we address that and provide resources to those individuals to make sure that they are supplied with the water that they need." 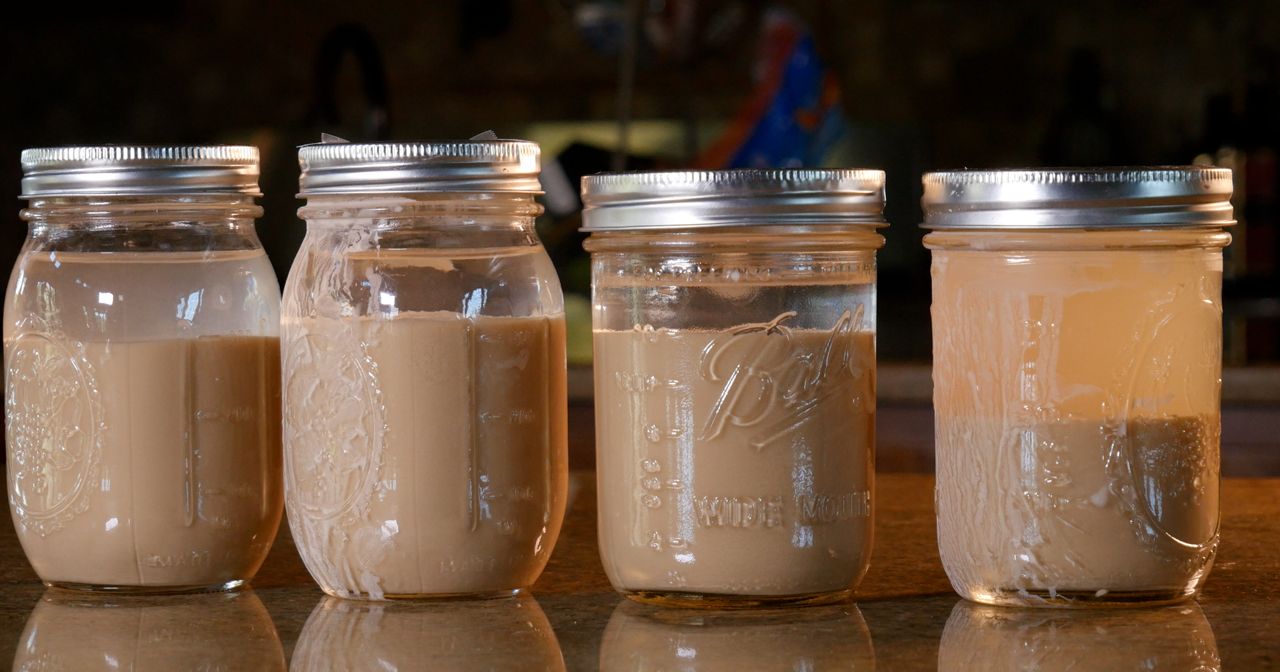 However, Albright says a few days' worth of bottled water did little to remedy the problem.

As if the inconvenience weren't enough, both Teri and her husband are doctors working during the COVID-19 pandemic.

“To not be able to wash your clothes right away is not a good thing when you’re a physician," said Albright. "Washing hands with bottled water is possible, but it’s not ideal.”

Last week Albright and Shaw got a water tank for their property. They have to refill it weekly and say they will be depending on it until they can determine their well is safe to use again.

“If we don’t have good water then our property is impossible to ever live on or sell," said Albright. "Just the uncertainty is very frustrating.”

Kinder Morgan says construction is paused indefinitely at the site where the incident occurred on the Blanco River, although construction on other parts of the pipeline continues.

“There is no timeline in place for beginning the crossing process again. We'll take our time to understand exactly what happened and a path forward that is going to be a successful path, successful from the drilling process but also taking into account land owners and environmental concerns and all the rest of the issues related to the pipeline construction," said Fore.

But Albright says it's too little too late. 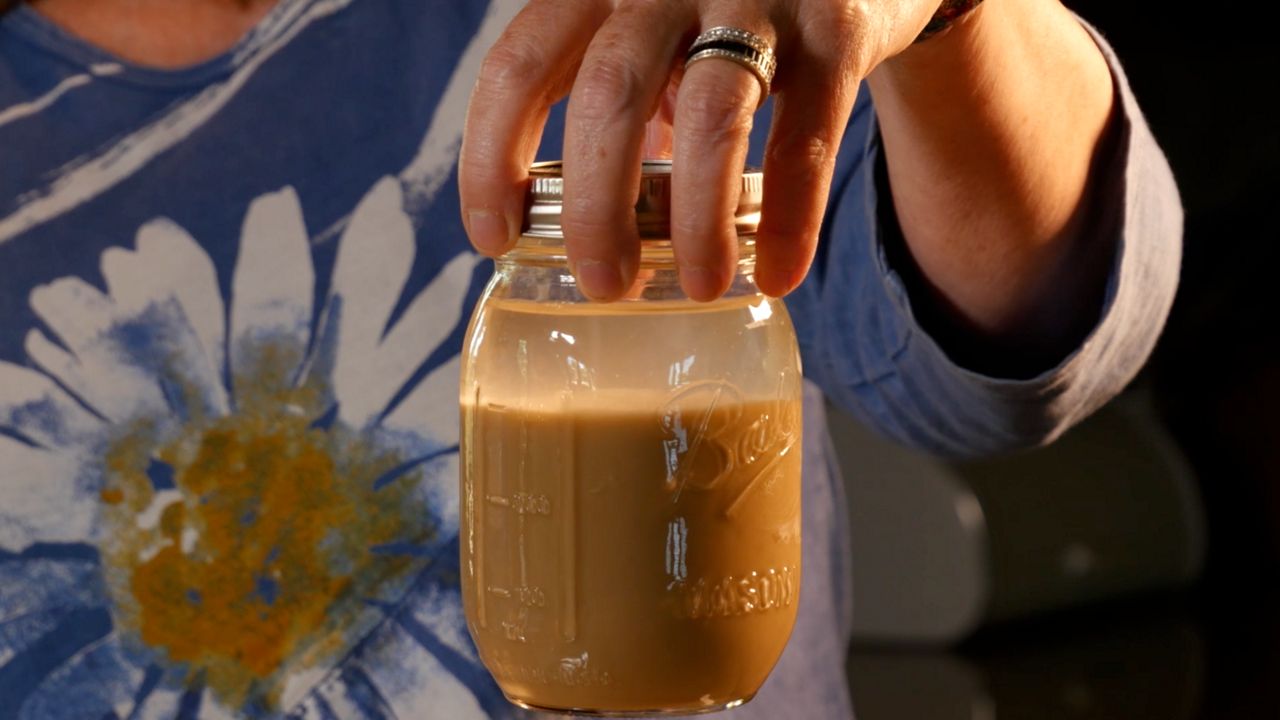 Cloudy well water is displayed in a glass jar in this image from April 2020. (Courtesy: John Brown)

"They kind of come through like the bully in the schoolyard and said, you know, 'We're putting this pipeline in and it's too bad for you guys. This is where it's going. But we know what we're doing and we're not going to mess up, you know, we know how to handle this.' And the first time they drill under the river, they do this. And then they didn't tell anyone, you know? They just lost all integrity with me," said Albright. "If they continue drilling in this area I just don't know what's going to happen. I don't trust them anymore, that they can prevent something like this from happening."

She says the incident also confirms her fears about the environmental impact of the pipeline’s route through the Hill Country, adding: "It doesn’t need to go through such a sensitive, fragile recharge zone for all the water between Austin and San Antonio.”

The Trinity Edwards Springs Protection Association, the Wimberley Valley Watershed Association, as well as the impacted landowners have issued a “notice of intent to sue” to Kinder Morgan, saying the incident violated the Safe Drinking Water Act by contaminating the aquifer.

Kinder Morgan says the drilling fluid is primarily made up of a bentonite clay, which is a naturally occurring substance.

The material does have two components that are known to cause cancer, but only when inhaled.

Ron Fieseler, the general manager of the Blanco-Pedernales Water Conservation District, says the water chemistry all came back normal, and although the total suspended solids test indicated the presence of sediment, he expects that to settle over time.

However, when asked, he did confirm that those tests did not test for metal carcinogens, or cancer-causing metals.

The Wimberley Valley Watershed Association sent in water samples to the LCRA as well, and said those results indicated high levels of multiple metal carcinogens.