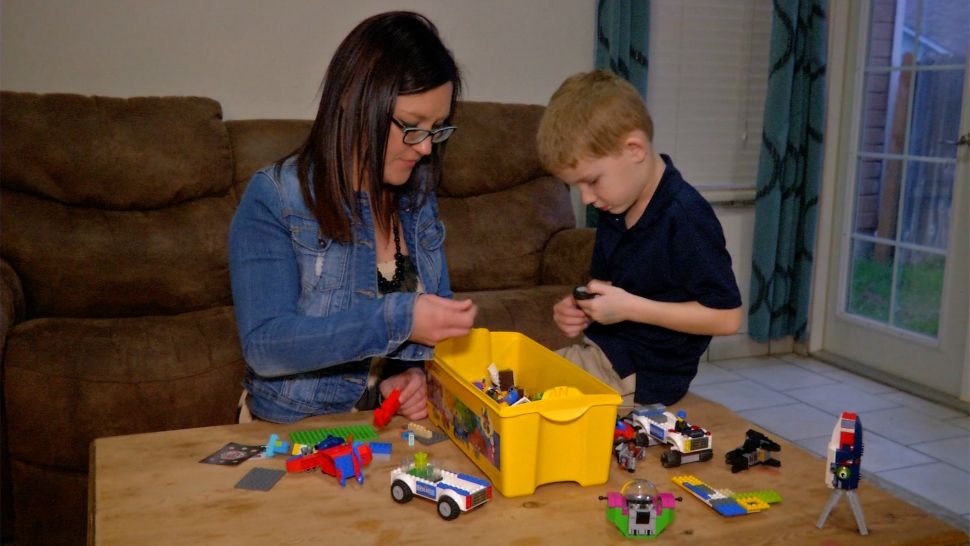 Maegan Gore, an A.R.T. patient, appears with her son in this image from February 2020. (Niki Griswold/Spectrum News)

Various medical studies have found it to be successful in significantly reducing the symptoms of post-traumatic stress disorder and anxiety.

"The brain has two components," said licensed professional counselor and certified A.R.T. practitioner Jim Denning. "We have the emotional brain, which is the one that doesn't understand time and it reacts emotionally to things, that's what gets triggered, and once the trigger is hit the thinking brain is kind of offline at that point. So what we're able to do is, in a controlled, safe environment, address those issues. The eye movements desensitize the amygdala so you can actually process those things rationally."

Maegan Gore is one woman who says A.R.T has helped treat her PTSD and anxiety after she left an emotionally abusive relationship.

“It caused me and my son a very exhausting, very depleting couple of years, emotionally, mentally," Gore said. "We moved seven times in two years, just to maintain safety.”

Even after she left her ex, his impact remained.

“People don’t realize how much that particular trauma impacts their life until they process through it, and how it impacts future relationships," said Denning.

“It affects me as a mother," Gore said. "I fought so hard for so long. I still fight to protect my son and take care of my son. And so, it hurts me to know that he’s the one who catches so much of the impact of the very trauma that I fought so hard to take us out of.”

After three years of traditional therapy, she decided to try Accelerated Resolution Therapy.

“I have them imagine it as a scene," said Denning. "And so they don't have to verbally relive it that way, they can relive it while we're doing the eye movements, where it's calm, so I don't need to know what's going on. I just know that I've stepped them through the process and then by the end of it, every single one of them has felt relief.”

In just her first A.R.T. session, Gore had a breakthrough.

She visualized her and her son beginning to cut the ropes of the bridge, to sever the ties and leave her ex and her trauma behind.

“But it wouldn't sever. And I got frustrated because I'm like why isn’t the therapy working, we're supposed to be able to cut this tie. And then there was a very, very clear moment for me, that I realized, we can’t. We can do the therapy for the rest of the day, and we won't be able to cut those ties, no matter what we use. Because ultimately, my son is always going to have some connection to his dad even if it's not in the way of physical interaction or having a relationship with him. He’s in his DNA. And so that hit me really hard and unexpectedly," Gore said. "That's the part where I realized what he meant by 'you keep the memory but you lose the emotional attachment to it.' Because I had to kind of process through that and and accept the situation for being what it is. But we were able to cut two out of four ropes. So, even though the bridge is still technically intact, it's a lot more difficult for someone to cross from the other side. And it was a lot easier for us to walk away from knowing that it wasn't fully intact, and we are not as accessible.”

It was a turning point that gave her hope.

“I was optimistic about, you know, the long-term effects, and I was relieved that it did only take the one session for me to feel some relief from my trauma, which tells me that, you know, over the course of multiple sessions and time it has the capacity to really change my life," Gore said.

It was a moment that also helped her begin to realize her own strength.

“You’re struggling to keep your head above water and you don’t feel like you’re ever going to make it back to shore, but he said, 'I promise you will. And when you do your story is going to help somebody else.' And that's stuck with me," Gore said. "I just kind of made it my mantra to live for myself and my son, but also to get through and get to the other side of my story."