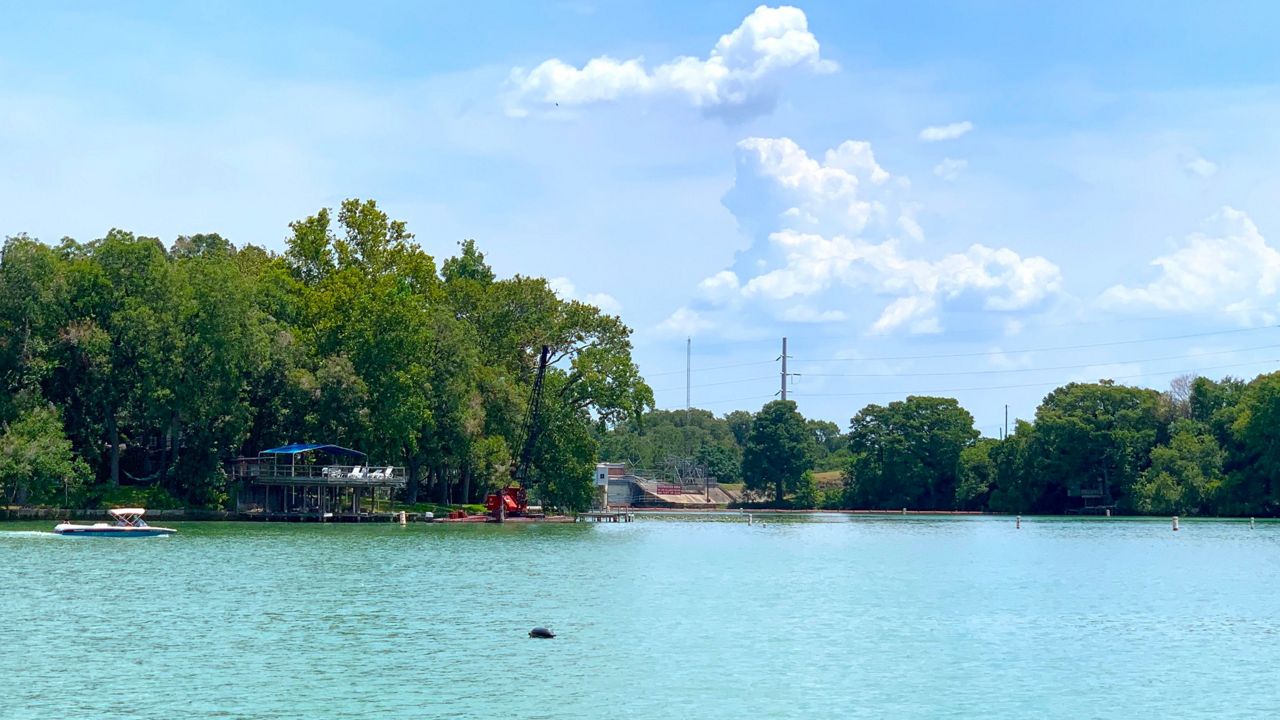 SEGUIN, Texas — The Guadalupe Blanco River Authority (GBRA) has made the decision to drain the remaining four lakes along the Guadalupe River in its dam system.

The decision comes after last month's board meeting, where concerned residents and lakegoers packed the GBRA after hearing rumors of a possible dewatering plan.

Much to the dismay of those who attended the meeting and expressed their objections, GBRA officially announced on Thursday the plan to move forward with the drawdown of Lake Gonzales, Meadow, Placid and McQueeney starting September 16.

The agency believes it will take about 3 days to drop the lake levels 12 feet at each of the lakes, and expects to be finished by the end of September.

While there’s no timeline to get the lakes filled back up, area lake associations have expressed interest in helping cover the cost to rebuild the dams and restore the lakes.

GBRA officials said another spill gate failure like the ones at the dam at Lake Wood and Dunlap could be imminent, and the agency doesn’t want to gamble with that chance. All six dams are more than 90 years old, and the aging steel is posing a safety risk.

"The event that happened at Dunlap I think is a very real example of what's going to happen if one spill gate were to occur and we just got very lucky that, you know, given the time of day that that happened, that there wasn't anybody downstream at the dam that was at risk," said GBRA engineer Charlie Hickman.

Mark Long with the Friends of Lake McQueeney says GBRA blindsided lakegoers and residents with the news of the dewatering plan.

“We just are disappointed that the folks that we've been working with have jumped the gun on this and we're as surprised as anyone else," Long said. “The most disconcerting thing is, as we've said before, the lack of notice and public forum and discussion to explore other ways to mitigate the risks that are posed.”

The agency said safety warnings posted on and around the dams have been ignored, citing surveillance video from Nolte Dam which shows kayakers and swimmers climbing on the dam.

@GBRATX says the decision to drain the 4 remaining lakes is due to the agency's desire to mitigate the public safety risk, citing instances like ones pictured in surveillance footage from Nolte Dam. Recreationalists can be seen climbing on the dam, disregarding warning signs. pic.twitter.com/2kkvjTS5Cl

“Disregarding the safety zones that we've put up, that we've expanded. And at this point, because we can no longer guarantee safety of the public, we have reached this difficult decision,” said GBRA communications manager Patty Gonzales. "The threat to life is very real."

Long said without Lake McQueeney, the area is losing a large piece of the economy.

“This is a tremendous piece of our local economy. There are homebuilders out here, service companies, realtors that rely on these links to make a living. Not to mention the tourism and consumer spending that goes along with that," Long said. "What other things could we do to mitigate those risks to avoid this economic disaster that is now going to be created by this agency, and our state government?”

Hickman said other options were looked at, but the decision to dewater was ultimately chosen as it was the only way to fully remove the risk to public safety.

“We’ve just seen there’s a very real risk to potential future spillage failures if we do not lower the lakes," Hickman said. "And so knowing that there’s such a public safety concern, this is really the only solution that we have available to us to address that public safety concern. So that’s why we’re choosing to do it.”

Hickman said recently, the river flow slowed enough for divers and engineers to inspect the gate structures at Lake Dunlap to evaluate the cause of the spill gate failure further.

X"We actually did some destructive testing on one of the hinges that remained at one of the spill gates that was still in place at Lake Dunlap and kind of used that to try to determine what the condition of some of the other gates would look like," Hickman said. "And the hinge that was removed showed some very significant signs of deterioration. And so with that level of deterioration, we had an outside engineering firm look at what that could mean and their recommendation was that it's just no longer feasible to continue the operations of this spill gates in that condition."

Rebuilding all 6 dams in its hydroelectric system will cost an estimated $180 million, and there's no timeline for when construction will begin.

"There has been some engineering design cleared for the Lake Wood replacement hydraulic crest gates and we're currently underway with the design of the replacement gates for Lake Dunlap. So we will continue to progress in the engineering. But to move into construction phase, a funding source will have to be identified before that's feasible," Hickman said.

GBRA said it doesn't make enough money from hydroelectric sales to fund the dam repairs, and isn't able to use funds generated from water sales.

"GBRA has roughly, I think 34 different lines of business that are individually contracted and those contracts dictate how those funds can be used. So you don't necessarily have the ability to transfer funds from one division to another unrestricted," Hickman said.

A dedicated website, GVLakes.com, has been established to keep the community updated on this evolving situation and provide contact information for key stakeholders, and includes frequently asked questions and misconceptions that have been answered.