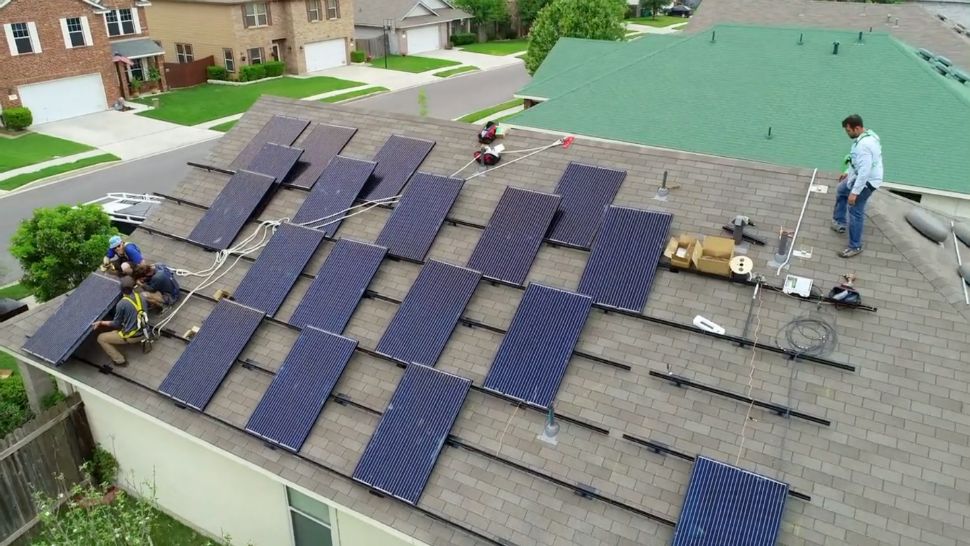 Solar panels are installed on a home in this image from July 2019. (Speir Innovations)

San Marcos to Go Solar: How You Can Take It Further

SAN MARCOS, Texas -- San Marcos Electric Utilities, in a partnership with Lower Colorado River Authority, will now start to harness the power of the sun by adding solar power into the mix.

Hydroelectricity already powers 3.5 percent of the city's usage, and there's an agreement for future wind power usage of 3.6 percent. This new solar power purchase adds 2.5 percent and will bring the total renewable energy usage for the city to almost 10 percent by 2021.

The city also said this will not make customers' rates go up.

“The city is very excited about the ability to deliver additional renewable power to our customers. We are actively pursuing additional low-risk, reliable, economically attractive contracts so our grid can represent the best interests of our citizens without raising rates.” -- Tyler Hjorth, public services assistant director.

"It's nice to see another approach going into the energy field and how we can help the pollution in the area. We've seen a lot of good things happening with river cleanup and now we're working with the air," said Nicholas Speir, Speir Innovations owner.

With the power purchase agreement, Speir said that San Marcos as an energy provider is investing in a purchase agreement to buy solar energy from a solar farm to then be sold to their clients. He said if homeowners want to take it a step further and install solar paneling on their own houses then that is where his company can help.

"​About 3.5 percent of [consumers'] annual usage will be produced by solar energy, but that's happening on the San Marcos side. So if they want to increase that and get to a higher portion of their energy consumption being produced by solar, they will need to contact us. That's where we come in and we'll get them the rest of that 96.5 percent," Speir said.

He said the benefit of this is not having a utility bill, and instead getting credited for what you produced but didn't use.

Nicholas Speir with renewable energy company, Speir Innovations, shows off just how much you can do with solar panels. In this case, it's providing power for all his gadgets in a rooftop tent on top of his truck. @SpeirInnovatio1 pic.twitter.com/AMDwdr6aVQ

"What this allows you to do is save money, what you would normally spend with San Marcos, and instead put it toward a solar loan. In general, we make that solar loan cheaper than what it would cost you to buy your energy from say San Marcos directly. So at the end of the month, they'll say we sent you 1,000 kilowatt hours, but your solar sent us 900 kilowatt hours. One-thousand minus 900: you're getting charged for 100. Most people are consuming at night, so during the day they're producing energy, sending it back to the grid for credit, and at night, they're pulling from the grid,” said Speir.

Spier said now is the time to make the switch to be eligible for a full federal tax credit, which is set to gradually phase out within the next few years.

"There's been a lot of government grants and push to stimulate the solar industry here in the states. A lot of those grants are gone, those were seen in the form of rebates that utility companies would provide to their consumers. Some utilities still provide rebates, but a lot of those are going away, or ramping down. That leaves the solar federal tax credit, which is also on its way down and out," Speir said.

Speir said the cost of solar panel materials are going up as well. With that tax credit going away, he said it's worth getting in the game now.

“The federal government has a 30 percent tax credit right now. That 30 percent is expected to ramp down to 26 percent next year and then 22 percent the year after that. And after that, it’ll be gone completely," Speir said. "So anybody looking to go solar should be looking now because it’s only going to get more expensive for the end consumer.”

For more information about Speir Innovations, visit its website.