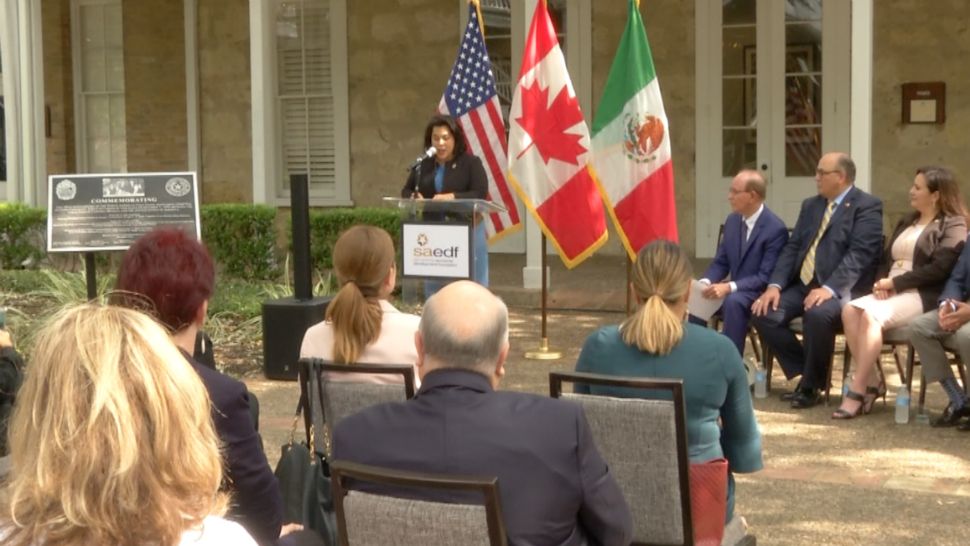 San Antonio city and business leaders address the looming threat of tariffs at the site of the signature of the 1992 North American Free Trade Agreement in this image from June 10, 2019. (Stacy Rickard/Spectrum News)

SAN ANTONIO -- Although he called off the tariffs in a tweet on Friday, President Donald Trump announced via Twitter Monday that a 5 percent tariff on Mexican goods could be reinstated. That's if Mexico doesn't cooperate with him regarding securing the border.

....We do not anticipate a problem with the vote but, if for any reason the approval is not forthcoming, Tariffs will be reinstated!

San Antonio city and business leaders met Monday to discuss why this threat of tariffs is still hanging over the heads of local businesses. Leaders met Monday for a press conference in the place where the North American Free Trade Agreement was signed back in 1992 to discuss the implications tariffs would have locally.

"We've already seen the price of tomatoes go up, we've seen the price of avocados go up, and that's without the tariffs. That's just with the border slow downs that we've had and the threat of tariffs," said Chairman for the Texas-Mexico Trade Coalition Eddie Aldrete. "So once you add a tariff then you'll see prices go higher everywhere."

The importance of passing NAFTA's replacement was emphasized at the press conference. It would need to be approved by Mexican legislature.

"We're worried about it and we all should worry about it because of al the jobs that are tied to the NAFTA agreement and now to the new agreement that would be passed," said Bexar County Judge Nelson Wolff.

That new agreement is the United States-Mexico-Canada Agreement, which trade experts say would include updated elements to NAFTA facilitating trade, promoting labor and protecting environmental and intellectual property.

"It is critical that Congress ratify the USMCA, that these modernized elements which also include benefits to small and mid-size businesses can take effect," said District 3 Councilwoman Rebecca Viagran.

Speakers stressed that nowhere has more to gain from the passage of the USMCA than Texas, and especially San Antonio, being at the heart of the NAFTA highway.

"A lot of the commercial cargo that's coming from Mexico ends up coming through San Antonio, so we're at the heart of our trade territory with Mexico, so all of the economic activity that we've seen since NAFTA began in 1994 has had a huge impact on both San Antonio and Texas," Aldrete said.

If the USMCA isn't ratified, leaders are fearful Mexico and Canada could find other trading partners elsewhere.