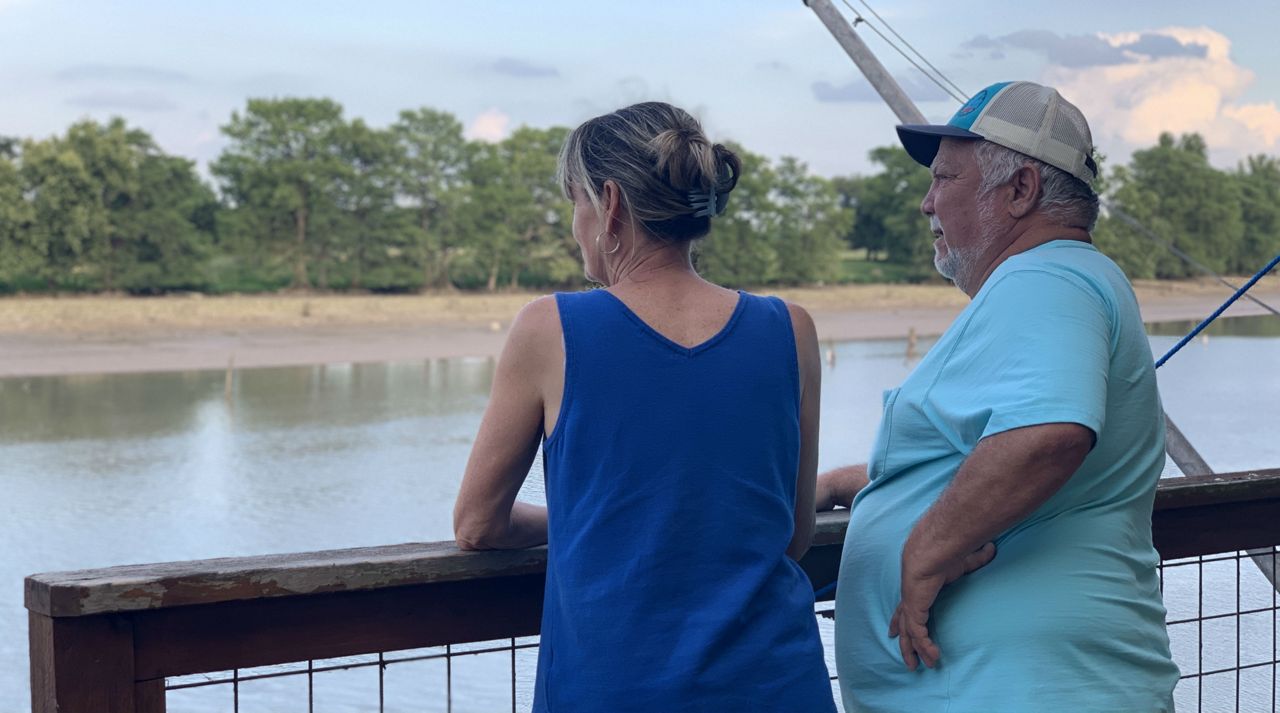 J. Harmon and wife Lory look at their backyard on Lakeside Pass near the dam at Lake Dunlap May 16, 2019 (Spectrum News/File)

GUADALUPE COUNTY, Texas – The president of the Preserve Lake Dunlap Association has nearly 450 homeowners looking to him for advice after a spill-gate failure severely affected their neighborhood lake.

The failure on May 14 at the dam at Lake Dunlap is now being compared to one that happened in 2016 in Gonzales at Lake Wood, according to statement released by the Guadalupe-Blanco River Authority.

GBRA states the "similar spill gate collapse at Lake Wood" was caused by a "failure of structural steel members inside the gate."

The organization goes further by saying the cause of the 91-year-old Lake Dunlap spill-gate failure will not be determined until further investigation, but "it is currently believed the failure at Dunlap is also related to aging structural steel."

"The dams were going to fail. It was just a matter of time. They were all built the same time. So Lake Wood failed first three years ago, now Dunlap had one fail and McQueeney is having maintenance done on it right now," PLDA president J. Harmon said.

The future of Lake Dunlap looks grim to Harmon.

"We own boats and jet skis and everything and we come down and sit on top of our boathouse and watch our friends go by," Harmon said. "We're not going to enjoy that this year, by any means at all. I'm not really sure we'll enjoy it the following year."

Harmon estimates it'll be years before they see water in their backyard again.

"The lake's gone. We no longer have lake access or lake front property that we paid enormous tax for. We have river access property, so we can't even access boat ramps or boating or anything like that. It's too dangerous all the stumps and hidden debris," Harmon said.

As the president of PLDA, Harmon carries the weight of about 450 homeowners looking to him for advice on what to do next.

"Do we know what's going to happen and how long? And all the neighbors know we've heard all kinds of stories and rumors that it can be fixed in a week or two, but I'm positive that that won't happen after talking to GBRA, it's going to be a long-term deal," Harmon said. "We've kind of done rough math on it and we've figured there's $50 million worth of boats and jet skis on the bank, and we can't get them out. So we're trying to figure out the solution for that."

There's also the concern of what will happen if the water dries up completely.

"Time is of the essence. And the longer it plays out, you'll see [the lake] grassed in and new trees growing and it's going to get worse," Harmon said. "The smell is going to be the first thing that you're going to experience. And after that, it's just going to be a matter of wait and see."

Due to water being released by the Army Corps of Engineers at Canyon Lake, there's still water in the lake, but its slowly dropping. Harmon expects the water to recede an additional four feet once the flow from Canyon Lake is stopped. The flow is also what is preventing GBRA from assessing the spillway's damage any further.

"We're down probably 11 feet right now. It's going to go down, and then we'll be back to the basic river bed of the Guadalupe River back in 1929, before the dam was built."

For now, he wants his neighbors to know he has their backs.

"We're doing our best. PLDA is going to try to step in and work with GBRA and do our best, " Harmon said. "Our bylaws state that we are to protect and preserve the intrinsic value and beauty and hope it works."

The statement released by GBRA also says "the ability to move forward with construction at Lake Dunlap, Lake Wood, and the other dams is dependent on securing funding for these multi-year, multi-million dollar projects."

GBRA is continuing to search for funding opportunities for the repair or replacement of the six dams in the river system.