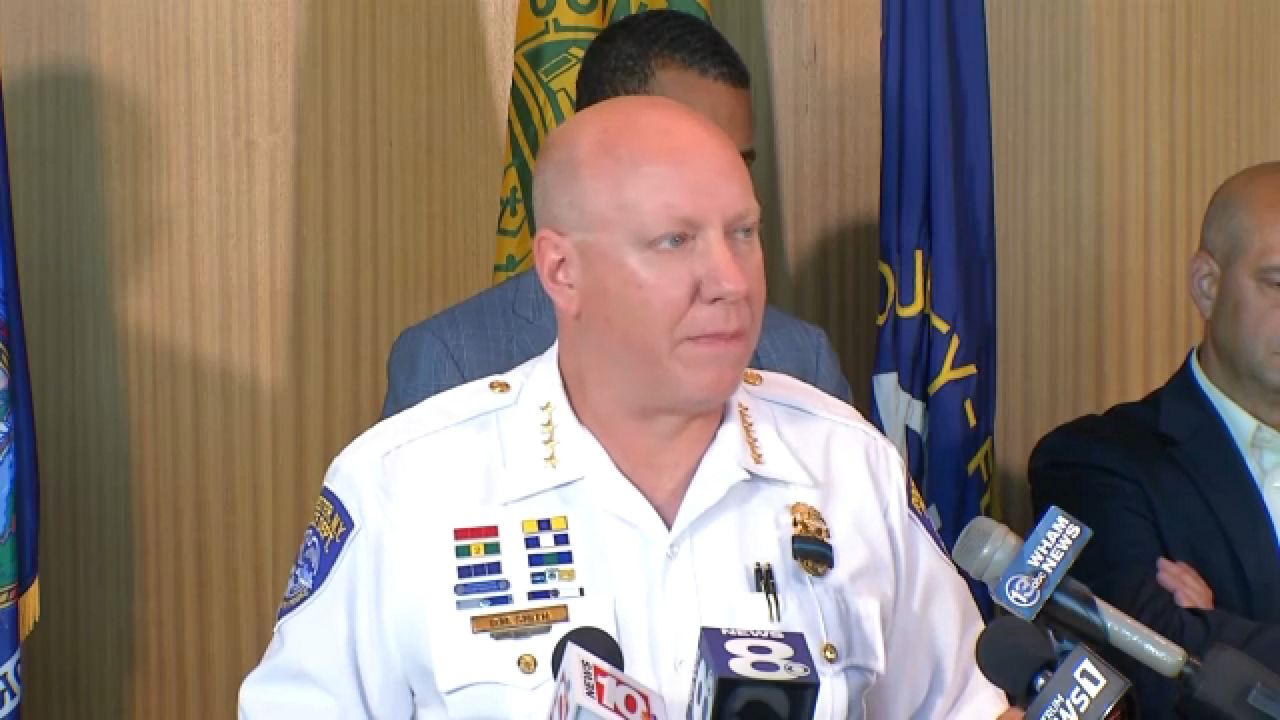 ROCHESTER, N.Y. — Rochester Police say a suspect has been arrested in connection with the shooting of two officers, one fatally, Thursday night on Bauman Street.

A third person, since identified by police as a 15-year-old girl, was also wounded.

"Yesterday morning, at 11 a.m., I was asked by the media, 'how dangerous is it out there for the officers of the Rochester Police Department?' My response was that every day, the men and women of this department leave home, not knowing if they are going to return home at the end of their shift," Smith said. "Ten hours later, Officer Anthony Mazurkiewicz, a father, a husband and a 29-year veteran of the Rochester Police Department, was killed in the line of duty on Bauman Street while in service to our community."

Mayor Malik Evans released a statement after the passing of Officer Mazurkiewicz, saying:

"Today is a sad day for our community. This is a nightmare for any family. It is punctuated even more when that person is a police officer; because every day when they kiss their loved ones goodbye, they know it could be their last one.

Officer Tony Mazurkiewicz and Officer Sino Seng were out yesterday trying to combat the violence and carnage that the Chief and I have been talking about over the last six months. Tony Mazurkiewicz could have easily retired, but he chose to continue going on the streets because he didn’t want folks in our neighborhoods to be held hostage by the very cowards that are wreaking havoc in our community.

Not only am I sad for the Mazurkiewicz family, and we pray for the speedy recovery of Sino Seng, I am angry. And upset. Because all too often, we are seeing a blatant disregard for life. Whether it be a woman sitting on her porch, or a 10-year-old girl braiding her mother’s hair, and now, an officer in the line of duty working to keep our city safe.

I want to offer my prayers to the family and all of the men and women of the Police Department in our city. These officers were out all night answering calls even though they knew their colleagues were wounded. Even now, they’re out answering calls.

I’m asking that you keep the Mazurkiewicz family and all of their colleagues in prayer. The mental health and safety of our officers is one of my top priorities."

"All of Monroe County mourns today as we learn Officer Anthony Mazurkiewicz, one of the brave Rochester police officers shot on Bauman Street last night, succumbed to his injuries," he said in a statement. "There are no words to adequately express the heartbreak and loss suffered by his family and our community through this senseless murder. This was a despicable act of violence, emblematic of the ongoing wave of gang violence and shootings plaguing our city. This officer died a hero, making the ultimate sacrifice to protect our community and make our streets safer. May we never forget his service and sacrifice. Our hearts go out to Officer Mazurkiewicz’s family, friends and fellow officers and we pray for the rapid recovery of Officer Sino Seng. I pledge to continue my close work with Mayor Evans, Chief Smith, and Sheriff Baxter to ensure our public safety, and will make any necessary county resources available to these efforts."

Flags at half staff at the Public Safety Building. #Roc @SPECNews1ROC pic.twitter.com/gnS38SvPQU

"As the former Police Chief, my heart is hurting and I am thinking of the men and women of the RPD after learning that two former colleagues were shot during a detail on Bauman Street, killing one and injuring another. These brave heroes were doing their job protecting the citizens of our city and were viciously attacked by a coward who has no regard for human life. Our city is under siege, and we must stand with those who have sworn an oath to serve and protect us. Join me in praying for all the men and women of the Rochester Police Department and especially for the two heroes who knowingly put themselves in harm’s way in service to our city and its citizens.”

We will continue devoting everything we have at our disposal to fight the gun violence crisis and protect all New Yorkers.

I know that all of New York is standing with the family of the fallen officer, his colleagues and the entire Rochester community.