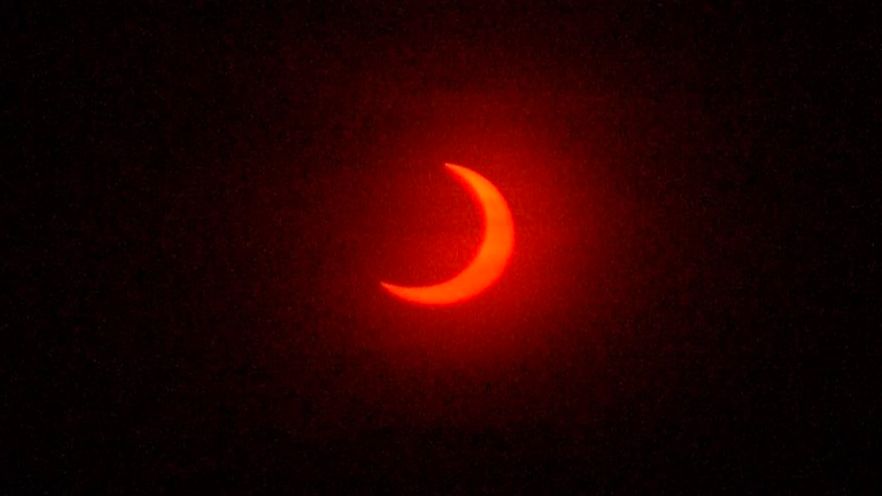 Steve Fentress, the director of the Strasenburgh Planetarium at the museum, explained what exactly everyone was seeing.

“There was this strange beautiful crescent rising out of the water of Lake Ontario, and over the next hour or so, the moon uncovered the sun," said Fentress.

He said it was important for everyone to be supplied with solar glasses to safely watch the eclipse.

HAPPENING NOW: Dozens of people are at Hamlin Beach to watch the partial solar eclipse! ☀️🌕. The Rochester Museum and Science Center is hosting this super cool event! @SPECNews1ROC pic.twitter.com/F8mCFfrqJG

RIT student Elissa Smith’s sister, Juliana, convinced her to wake up and witness the natural event.

“So early, but definitely worth getting up in the morning and it was beautiful so yeah it was really fun,” said Elissa.

Juliana is a marketing intern for the museum and says this was one of the events she was looking forward to experiencing.

“We were scared it was cloudy,” said Juliana. “The weather turned out great which was awesome and then the turnout was amazing. I don’t even think we expected this many people but it turned out great.”

This beautiful morning *eclipsed* most other mornings at work.

Check out the shadow of the “ring of fire” eclipse on this piece of paper and a cool shot @r_heals13 got on his camera! And nothing beats a sunrise over the water pic.twitter.com/PCkoCKSICJ

Rochester was one of the few lucky places to get to see this eclipse, also known as the "ring of fire," along with northeastern Canada, Greenland and Russia.

Fentress said there will be more eclipses for the Rochester area to see in the future.

RMSC is already planning events for those future eclipses.