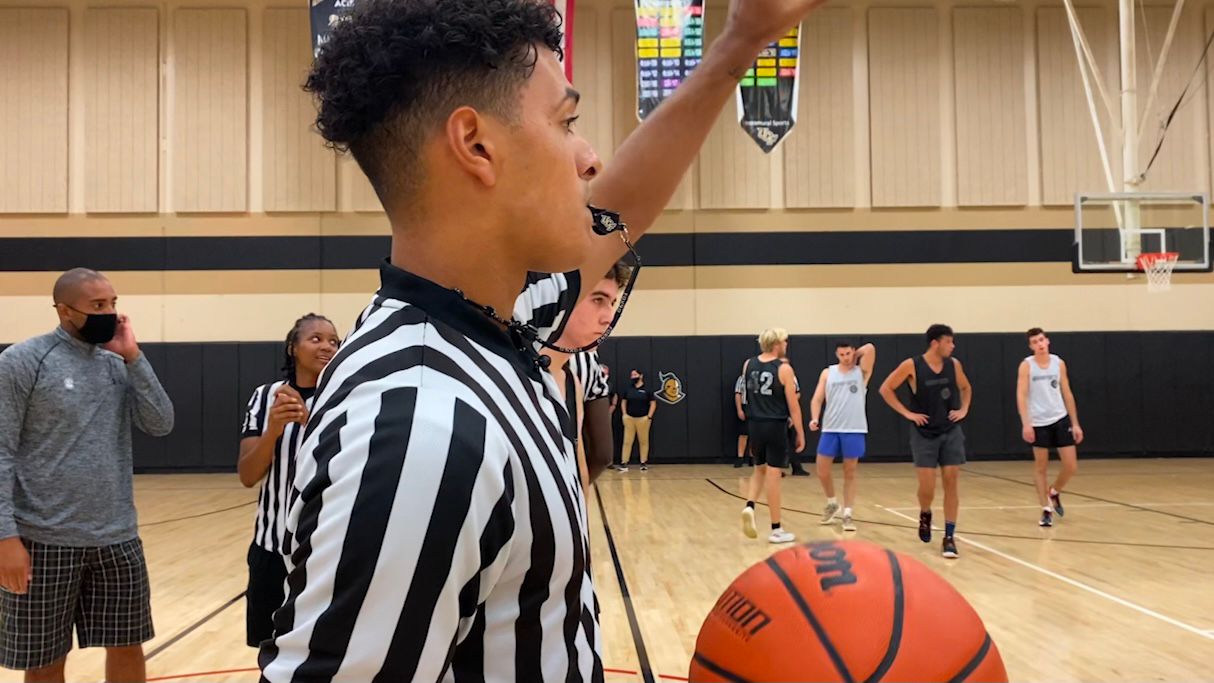 'Referee U' at UCF prepares students to be a basketball official

ORANGE COUNTY, Fla. — The NBA season is right around the corner and the players are busy with training camp. But have you ever wondered what goes into the process of training basketball officials?


Basketball became a personal passion for Jose Acevedo at a young age. His dad played the sport at college in Puerto Rico, then Jose decided to put his skills to the test after his family moved to Miami.

“In eighth grade, I decided to try out for the basketball team at my school, and it just took off from there,” says Acevedo, who is in the UCF basketball officiating program. “I just ended up falling for it, and it took me all the way to playing club basketball here.”

The UCF student, in his second year in the program, says he wanted to gain more knowledge and implement the rules of the sport to get better at it, and in the process, he fell in love with officiating.

The course combines on-court training with classroom study. Each class begins with a rules discussion. Acevedo says he’s been able to quickly apply those notes to games.

“It’s awesome to see that those things we learn about in the classroom setting,” Acevedo says. “A lot of times, it could be what people consider boring because we’re not action-packed and officiating, but they actually do happen.”

Referee U, as the program is known, also brings in guest speakers. This week, Xiomara Cruz, an NCAA Division I basketball official, was there to share her experience in the industry.

“It’s a little bit of a star-struck moment,” Acevedo says. “But at the same time, they’re here to prepare you and help you get better, and you could think these people are superstars. But in reality, they’re just here to get better, and they started the same way you did.”

After classroom, it’s back to the court. The 21-year-old is happy to pass along his knowledge to the players while he’s out there.

“Give them pointers on how to play better defense, or these moves are travels because of this,” Acevedo says. “I can definitely teach them and develop them to become more competitive in the future and maybe even see them on TV one day.”

The program’s been around for 25 years, and its alumni include refs for the NBA, WNBA, NCAA and in Steve Anderson’s case, this summer’s Olympic Games in Tokyo.

“Through my success, I wanted to come back and be part of this, as well, and teach the younger officials and hopefully get them one day to the level that they want to achieve,” UCF basketball officiating instructor Steve Anderson says.

Acevedo’s game got a little chippy, with technical fouls and ejections. But that provided a perfect teachable moment.

“They had a funky ending, and the whole crew, not just Jose, but the whole group can learn from it. But overall, solid job,” Anderson says.

The students receive immediate feedback on the court after the game, to train them to be fair, eagle-eyed officials.

“Just having Steven there to walk us through what happened at the end of the game was essential, and it honestly built my game up to the next level,” Acevedo says.

Then they’ll head back up to do film study to break things down even further. Acevedo hopes to take everything he’s learning and follow in his instructors’ footsteps.

“Develop my skills as an official and being able to come to the next level in JUCO or Division I essentially,” Acevedo says.