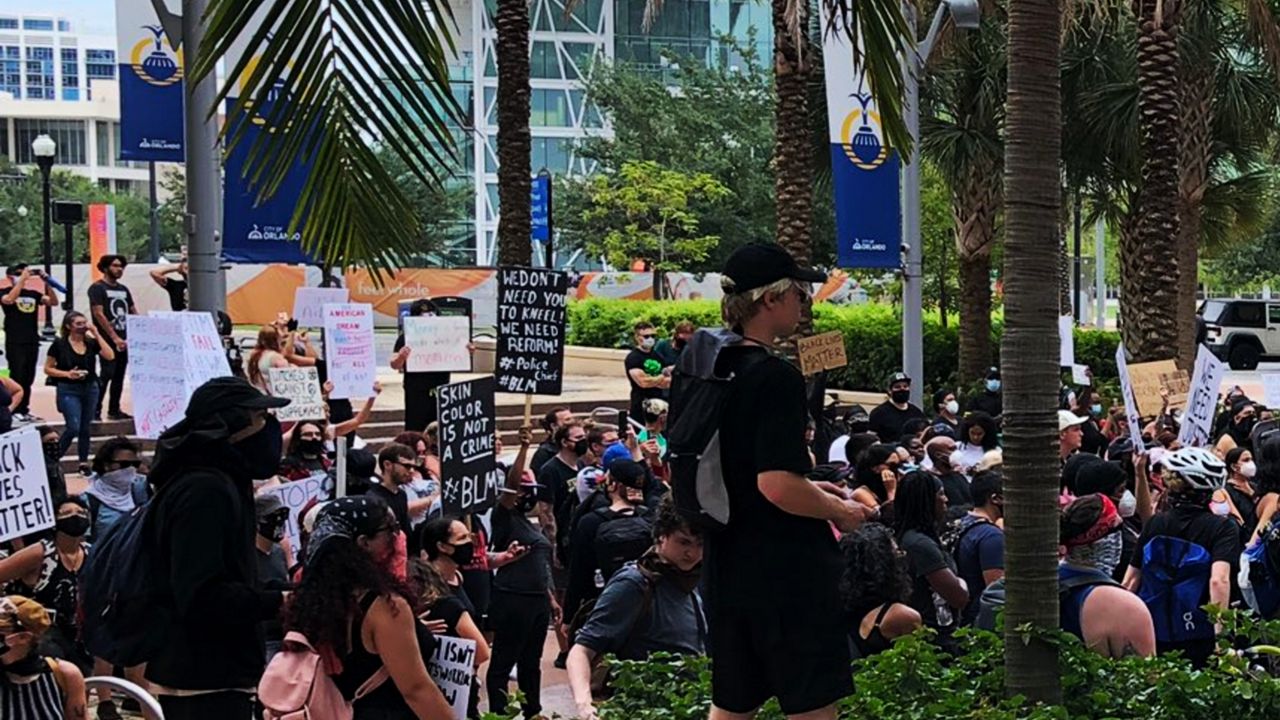 Protesters gathered in front of Orlando City Hall for another day of protesting in downtown Orlando. (Eric Mock/Spectrum News 13)

ORLANDO, Fla. — Protesters marched for miles on the streets of downtown Orlando Wednesday, demanding change amid the death of George Floyd and the protests it's sparked nationwide.

Floyd pleaded for air after a white police officer, Derek Chauvin, had his knee on his neck during an arrest in Minneapolis over a week ago. Floyd died at a hospital shortly after.

Before the start of the Orlando protests, Mayor Buddy Dyer said that there would be a new curfew time for the city's downtown, which starts Wednesday at 8 p.m. 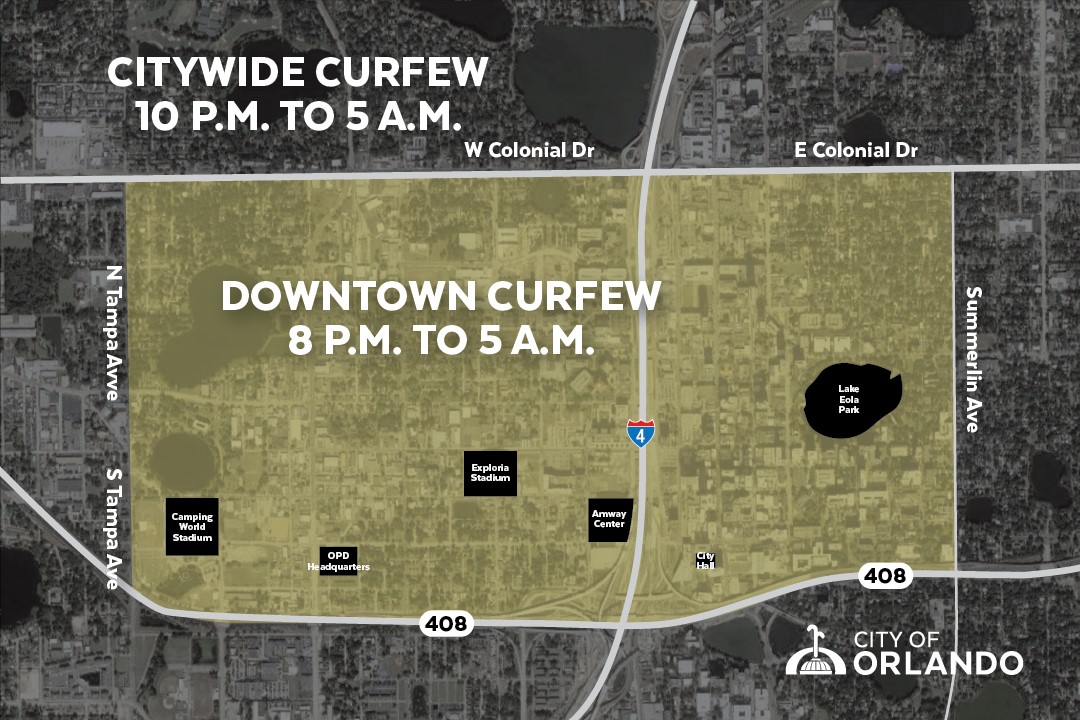 This map shows the zone under the new curfew for downtown Orlando, starting at 8 p.m. Wednesday. (City of Orlando)

During the Wednesday protests, people marched to Orlando City Hall, where they chanted "Black Lives Matter" and demanded for Orlando Police officers to acknowledge their cause.

They later made their way to Orlando Police headquarters, where protesters shouted at officers, who were standing guard in riot gear, to show solidarity by taking a knee with them. No officer did so.

Courtney Marion, a law school student at FAMU, says even with the arrests of the officers involved in the death of George Floyd, they still have a lot to march for.

“I’m hoping for radical reform in this justice system. I think that the police need to undergo an entire change, our social justice. Like people need to be held accountable,” Marion said.

Until that happens, she said she'll continue marching.

After protesters made their way back to Orlando City Hall, police warned them about the 8 p.m. curfew. Despite repeated warnings, police arrested several protesters who lingered after the start of the curfew.

Tuesday afternoon, thousands joined in peaceful protests in Orlando, but police say some aggressors changed that picture by the end of the night and had to use tear gas to disperse crowds.

Despite a 10 p.m. curfew enacted by Orange County Mayor Jerry Demings, many protesters remained in downtown. Officers with the Orlando Police Department warned people they could be arrested if they remain outside past the curfew. Officers deployed tear gas and smoke on the crowds after 10 p.m.

Police say some stragglers began throwing rocks and bottles at officers. And after, “continued aggression” that is when officers released the tear gas.

He also said that tear gas is always used as a last resort and that officers give verbal warnings first. If people begin to throw things, then smoke is used, he explained, saying that officers will assess the situation and if things do not improve, either pepper spray or tear gas is used.

Police also used chemical agents over the weekend when they say some people started throwing whatever they could get their hands on, including construction equipment.

On Monday, officials announced there would be a formal use of force review and that they would release the body-cam video after the review. Rolon on Wednesday said that there were no arrests during Monday's protests in Orlando.

Rolon said that there is another protest scheduled on Wednesday afternoon at 3:30 p.m.

But before all the chaos, many saw thousands come together, united in their message for justice and admonishing any would-be aggressors.

“We’re not here to cause violence or destruction or chaos at all. We’re here to stand up for the injustices that have been happening in the system for many many years. People have been dying, getting killed unjustly and unfairly,” said one protester.

Meanwhile, dozens in DeLand Wednesday laid down on South Alabama Avenue, voicing their anger with police officers and racism in the wake of George Floyd's death.

They marched around town, shutting down parts of Woodland Boulevard with the help of police, as they spread their message of change.

Organizers, who did not want to be named, said they plan on hosting more peaceful protests in Deland.

In Clermont, hundreds gathered outside city hall to peacefully protest police brutality and the death of George Floyd.

The group listened as speakers addressed topics like racial inequality, the importance and meaning of the Black Lives Matter movement, and the problem with staying silent.

Live updates from our crews in the field