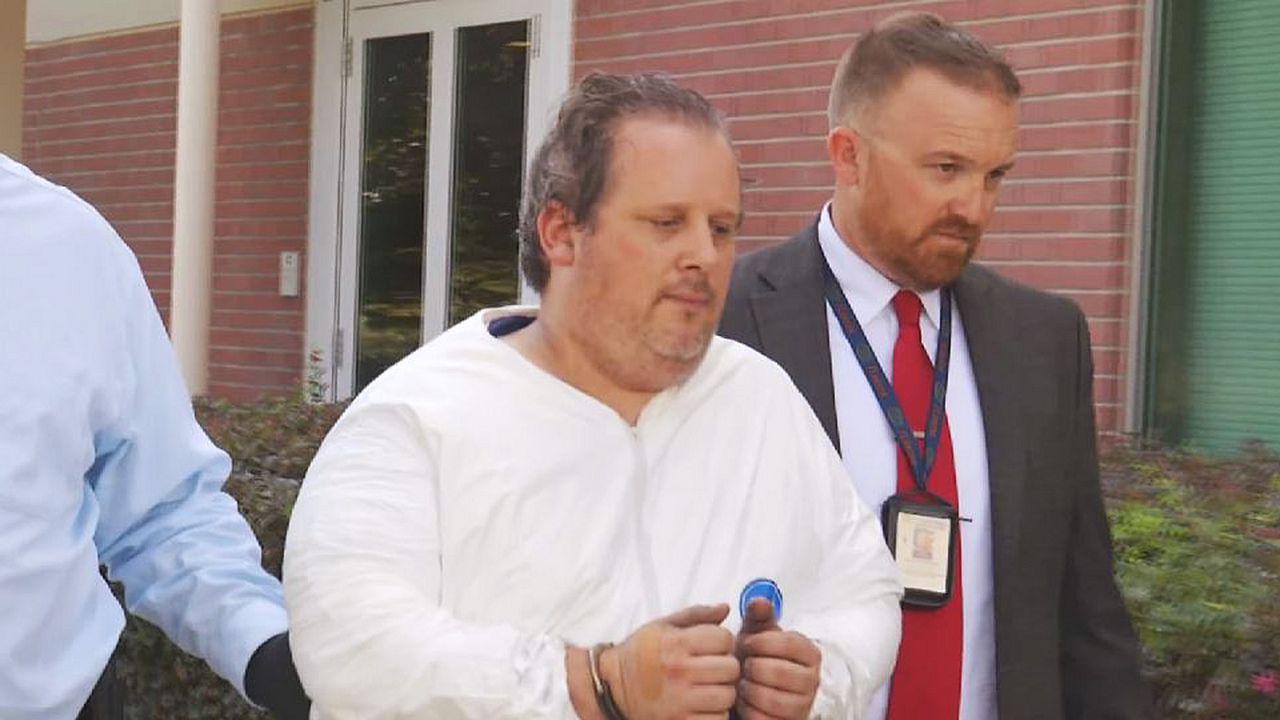 Anthony Todt is escorted by Sheriff's detectives Wednesday after he was arrested on homicide charges in the deaths of his wife and 3 children. Their bodies were found in a Celebration home Monday. (Spectrum News image)

CELEBRATION, Fla. — A mom and three children who were found dead in a Celebration home were slain by the woman's husband, who was being served a federal warrant, Sheriff Russ Gibson says.

Anthony Todt confessed to killing his wife and their three children, Gibson said during an early Wednesday afternoon news conference, calling it "an evil and horrendous act."

The family — Megan, 42; and children Alek, 13; Tyler, 11; and Zoey, 4 — was found dead Monday in the home on the 200 block of Reserve Place. The sheriff appeared to choke up when he read aloud Zoey's birthday.

Deputies with the Osceola County Sheriff's Office were helping federal agents from the U.S. Department of Health and Human Services in serving an arrest warrant to Todt when they found the bodies. A spokesperson for the HHS's Inspector General's Office tells us that Anthony Todt was being charged with health care fraud.

This is the perp walk for Anthony Todt. Todt got questioned by reporters as to his confession. @MyNews13 #News13Osceola #Celebration #DeathInvestigation #TodtFamily pic.twitter.com/FiqLFVHgWd

"Anthony has been arrested on a warrant obtained by our detectives today for multiple counts of homicide and one count of felony animal cruelty," Gibson said.

He said he personally didn't know specifically why federal agents were investigating Todt, only that it was tied to an investigation in Connecticut.

"We believe the deaths occurred sometime toward the end of December," Gibson said.

Detectives were still waiting on positive identification of the four bodies as of the news conference. But Gibson said they strongly think the bodies are of the Todt family.

“You see him every day next door, smiling and waving, and you can fathom what it’s like," neighbor Michelle Augustin said. "Now, we’re never going to see the kids again and hear their laughter. It’s very sad, it’s tragic.”

Osceola Sheriff’s has confirmed this is a picture of the Todt family. Anthony is now at the Osceola County Jail, that’s where I’ll be live from tonight. @MyNews13 #News13Osceola #Celebration #DeathInvestigation #TodtFamily @News13JeffAllen pic.twitter.com/adYAvnC2z2

Last month, an out-of-state relative asked for a wellness check on the Celebration family, because they had not heard from them in a couple of days. Deputies went to the home December 29, 2019 but from the outside didn't find any cause for concern.

Gibson deflected possible criticism that the deputies didn't make a forced entry in the home, citing privacy concerns. He said it's not unusual for deputies not to do a follow-up check if they don't see anything suspicious. He added that the family was known to travel, and it wasn't uncommon for the family to pick up and go somewhere. Gibson didn't elaborate further.

Federal agents in Connecticut contacted the Osceola Sheriff's Office on January 9 regarding an unrelated investigation into Todt. Deputies made several attempts to reach him and the family but did not have any luck.

Here’s his message to the community: pic.twitter.com/i5bBQcduvL

Numerous online posts dedicated to gathering information about the missing family of five, some showing a holiday picture of the Todts with their three children, are now marking the tragedy.

Gibson shared a hotline number for anyone who may be going through difficult times.

Gibson: If there's any person or family going through a crisis, there are so many people and organizations that are willing to help.
Hope Line Network: 1-800-442-4673
Crisis Textline: 741-741

"As sheriff of Osceola County, it brings me great sadness to report such a tragedy," Gibson said. "We grieve along with the victims’ family and friends, along with the community for this tragic loss of innocent lives."

An online paper trail gives a window into the last few weeks of the family — but leaves more questions than answers.

Anthony Todt had apparently been commuting back and forth between Connecticut and Florida for quite some time.

Facebook posts made by family and friends in Colchester, Connecticut, show they were concerned about their missing loved ones and asked for information.

According to records on the Osceola County property website, the family had two properties in the Celebration area.

Then, in late December, the landlord of the home on Reserve Place in the Disney-designed community filed an eviction notice for the family.

Duke Energy records show that the utility shut off power at the home last week.

“The feds were here with their cars and personnel, and I didn’t think much of it, because there’s usually activity down the road with drug abuse," Dr. Priya Tandon said. "Then when we looked out, his door was open and his car was open, and when I asked the landlord, he said he was being investigated, and I left it at that.”

The FBI and U.S. Department of Health and Human Services (HSS) launched an investigation into Todt and his business in April 2019, according to a 36-page affidavit filed in federal court by Jeffrey W. Anderson, a special agent with the Office of Inspector General for HSS.

The affidavit, filed in U.S. District Court in Connecticut, was unsealed Wednesday and obtained by Spectrum News.

A criminal complaint filed January 10 in the U.S. District Court for the District of Connecticut alleges Todt, a licensed physical therapist, committed health care fraud from January 1, 2015 to November 21, 2019.

A probable cause affidavit by the Health and Human Services Office of Inspector General says Todt is owner of Performance Edge Sports LLC, a Connecticut corporation doing business as Family Physical Therapy with two offices in Colchester.

An unnamed woman whose children were treated at Todt’s Family Physical Therapy helped investigators. She called his company "a mess" due to the high turnover among pediatric physical therapists.

Feds confirm that Anthony Todt who admitted to killing his family in their #Celebration home was being investigated for health care fraud. This federal case is now unsealed. Live in just a few mins. @MyNews13 #Celebration #TodtFamily #DeathInvestigation #News13Osceola pic.twitter.com/5yXbD3fmNv

He said he owned practice for 11 years and was the only person who handled the billing.

Investigators said records showed Todt and his business took out 20 loans from January 2015 to June 2018 to fund the business. These short-term lenders provided quick cash. But they also automatically withdrew money directly from his company’s bank account.

To keep the cycle going, Todt charged for procedures that were never performed and then funneled payments from Medicaid, Medicare and private health insurance into his bank accounts, agents said. That way, he was able to cover the automated withdrawals to the short-term lenders.

"No, it's me," Todt told investigators.

When he was asked why he did it, Todt said it was “easier” that trying to borrow money.

He said he defrauded the government to “keep pace” with personal loans.

“When asked if he was living above his means, Todt replied, ‘That's the best way to put it,’ ” according to the federal records.

Even though he agreed to plead guilty and meet with an attorney to work out the details of his federal prosecution, Todt didn’t follow up with the agents after the December 4, 2019 conversation.

Investigators met with his employees, who said Todt didn’t return from Florida in December to treat patients in Connecticut as planned. He kept in touch with one employee through sporadic text messages that month. But workers said some of their paychecks bounced. Then, they said, they stopped getting checks. So they stopped showing up for work and both locations closed.

An agent went to his business at 744 Middletown Road on January 6 and found an eviction notice saying Todt had not paid rent in December and January and owed $6,290. The landlord later told the agent Todt only made a partial rent payment for November 2019.

In a released statement, the Office of the Attorney General in Connecticut said “we can confirm we have an open False Claims Act investigation into Anthony Todt. Beyond that, we are unable to comment or provide further details.”

The Connecticut State Police said it was aware of news reports about an investigation into a family with Connecticut ties.

"The news reports out of Celebration, Florida are heartbreaking and as an agency we want to express our deepest condolences to the families of the victims," a spokesperson with Connecticut State Police said in a statement. "To date, (we have) not received any request from local authorities in the Florida area to assist in this investigation. We are confident in their ability to conduct a thorough investigation."

Todt has cooperated so far, Gibson said, and was released from a hospital Wednesday after ingesting Benadryl. He had also made comments about harming himself.

Todt is being held without bond at the Osceola County Jail on four counts of second degree murder and one count of animal cruelty.

Deputies with the Osceola County Sheriff's Office went to a home on 200 block of Reserve Place and found 4 bodies. Sheriff Russ Gibson said Wednesday that they could have been there since late December. (Rachael Krause/Spectrum News)