Chuck and Terry Nowiski lived in their country-style farmhouse with a wrap-around porch for 36 years before it flooded. After hurricanes Matthew and Florence, they said “yes” to the state’s offer to buy their place and tear it down.

Nearly three years later, they’re still waiting for the money. What’s worse, they say it’s for the home’s value before the storms hit in 2016 and 2018. Now they worry they won’t be able to buy the house they want with the federal disaster dollars they’ll get.

Hot real estate markets have made some homeowners wary of participating in voluntary flood buyout programs, impacting efforts to move people away from flooding from rising seas, intensifying hurricanes and more frequent storms.

Flood buyout programs typically purchase flood-prone homes, raze them and turn the property into green space. That can help prevent deaths and health problems associated with flooding, such as mold-related respiratory issues and emotional trauma. 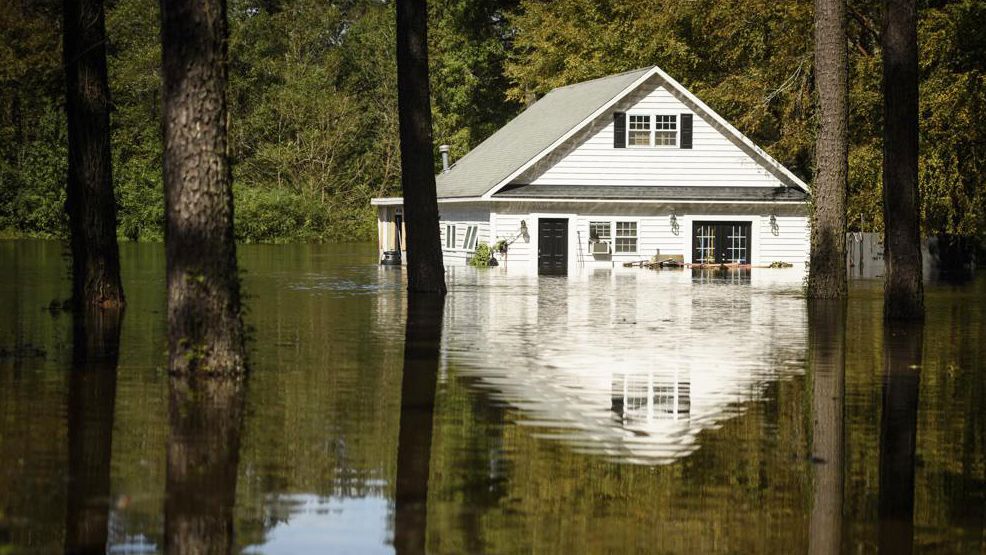 FILE - A home is surrounded by flooded waters from Hurricane Florence off of U.S. 401 near Linden, N.C., on Tuesday, Sept. 18, 2018. Hot real estate markets have made some homeowners wary of participating in voluntary flood buyout programs, impacting efforts to move people away from flooding from rising seas, intensifying hurricanes and more frequent storms. Flood buyout programs typically purchase flood-prone homes, raze them and turn the property into green space.(Andrew Craft/The Fayetteville Observer via AP, File)

“This is basically the tool that we have right now to help people move somewhere safer,” said Anna Weber, a senior policy analyst with the Natural Resources Defense Council. “And so it should work as well as it possibly can.”

But some cities have seen waning interest in voluntary programs in the wake of rising home prices. Some states are even offering extra money to persuade people to move out of harm’s way.

People who take buyouts usually want to relocate to similar homes on higher ground in the same community. But some worry that buyout dollars won’t be enough. Others reject them because private buyers’ offers were too good to turn down. The houses stayed occupied — and at risk.

And while experts say housing markets are cooling off with rising interest rates, the challenge of finding affordable homes is likely to get worse.

“Replacement housing will only get more expensive because rising waters often means more competition for less housing,” said Jesse M. Keenan, a real estate professor at Tulane University’s School of Architecture. “Nothing will be easy. Nothing will be cheap.”

Programs have traditionally struggled to help everyone relocate to similar housing, particularly those with lower incomes. Inflated housing prices have shined a greater spotlight on the limitations.

In general, they weren’t designed from the start with the idea of, ‘How does this household end up in a better place in the end?’” Hino said. “The focus has been on removing the buildings from the flood plain.”

Buyout offers can be based on a home’s fair-market value as well as its pre-storm worth. The latter generally stems from the assumption that a home is worth less because it’s been damaged. But rising home prices complicated that assumption, while magnifying concerns about the often yearslong wait for FEMA dollars.

FEMA Press Secretary Jeremy Edwards said in a statement the process can be lengthy, in part, because the agency must determine that a buyout is cost-effective and complies with environmental and historic preservation requirements.

Edwards also said that FEMA now allows for an increased payment of up to $31,000 to assist homeowners in their search for comparable housing.

“The science makes crystal clear that this climate-driven devastation will only get worse and more costly,” Casten said.

Meanwhile, the Nowiskis are waiting to know how much money they’ll get for the buyout they agreed to in 2019.

Retired and in their mid-60s, they want to stay local without taking out a mortgage. Their daughter is nearby, and so is their nonprofit ministry to help troubled boys.

They’re now considering selling to a “house flipper” or just staying in their home, which is near a tributary of the Cape Fear River.

North Carolina Emergency Management, which handles the buyout program where the Nowiskis live, said in an email that a state fund provides up to $50,000 to help people find similar homes when federal grants aren’t enough.

Keith Acree, an agency spokesperson, acknowledged that buyouts through federal programs can be a long process.

“Homeowners that want to get out of a property quickly will often pursue other methods, if they have the means,” he said.

Other states are also offering money on top of federal disaster dollars. In response to rising home prices, the South Carolina Office of Resilience teamed up with coastal Horry County to create a “market adjustment incentive” in February, said Ran Reinhard, the office’s mitigation director.

The incentive ranges from $10,000 to $50,000 on top of the pre-storm home value offered by the buyout program. It appears to be making a difference.

Twenty-seven offers have been made, and 21 homeowners have signed on so far.

“We wanted to make it so a homeowner could remain a homeowner and in their community,” Reinhard said.

But in some areas, the housing market has been so competitive that private buyers have out-bid the government — even when it offers fair-market value.

North Carolina’s Mecklenburg County, which includes the city of Charlotte, is one such place. It created its own self-funded program to move people away from the Catawba River and other waterways that can overflow from heavy rains.

Rising home prices aren’t making it easy. For example, the appraised buyout value of one Charlotte home rose from around $250,000 in 2020 to about $325,000 in late 2021. The property was then purchased by a private buyer for what county officials believe was as much as $100,000 over asking price.

“I would tell you probably it’s twice as hard to get to the closing table on flood plain buyouts,” said Dave Canaan, the county’s director of storm water services before leaving the position in early June.

In Chesapeake, Virginia, no one participated in the buyout program last year, said Robb Braidwood, coordinator of emergency management.

Many older homes were built along the Elizabeth River and tributaries that swell from heavy rains and storms that push water in from the Chesapeake Bay.

There’s a fading sense of urgency because the last major flood was in 2016, Braidwood said. Another problem is the wait times for FEMA money and the limits of its grants. Increased home prices are also likely to blame.

“We do this once a year where we call out to everybody that floods,” Braidwood said. “And we just hear crickets back.”

Joseph Noble, whose North Carolina home sits near a tributary of the Neuse River, rejected a FEMA-funded buyout offer after it flooded twice in 2016.

He said the money wasn’t enough to buy a similar home nearby — and that was before prices heated up in the small city of Kinston, about 80 miles (130 kilometers) southeast of Raleigh.

He worries about what kind of buyout offer he’d get if he floods this year.

“All it takes is one good hurricane that goes our way,” Noble said.