Investigators say just after 11 p.m. Thursday, they were called to the park as witnesses reported that Sampson fell off the Orlando FreeFall ride. According to information from the family’s lawyers, the teen was in Orlando with his football team for spring break.

“This family is shocked and heartbroken at the loss of their son. This young man was the kind of son every parent hopes for — an honor roll student, an aspiring athlete, and a kind-hearted person who cared about others. Needless to say, his family is absolutely devastated. A fun theme park visit with his football team should not have ended in tragedy. Bob Hilliard and I, on behalf of both parents, Yarnell and Neki, intend to get answers for Tyre’s grieving family and request prayers as they shoulder this unthinkable loss.”

During a Friday press conference, Orange County Sheriff John Mina said that it doesn't appear foul play was involved in the accident.

"It appears to be a terrible tragedy," he said. "Our prayers and thoughts are with the family."

"Tonight, the ICON Park family is grieving because of the tragedy involving Tyre Sampson. Our heartfelt thoughts are with his family and friends. ICON Park is committed to being a place where families can spend quality time together in a safe and fun space.

"We are in close coordination and will continue to cooperate with law enforcement and regulators,” the statement continued.

Viewer-submitted video to Spectrum News 13 appears to show Sampson slipping out of his seat as the ride dropped from the 430-foot tower.

The FreeFall, boasted as a record-breaking ride, opened just last year in December. A vehicle takes riders high up into the sky, then drops at 75 mph, stopping 45 feet from the ground. That is when investigators believe the teen slid out of the seat.

According to OCSO, the investigation is "in its very early stages." Deputies say Sampson was taken to the hospital after the fall, where he died from his injuries.

Mina stressed during Friday's press conference that his agency's role was to determine if the incident was an accident or not, but that "it appears to be a terrible tragedy."

Currently, no criminal charges have been filed in connection with the accident.

Early Friday morning, John Stine — director of Sales and Marketing for the Slingshot Group that owns the Orlando FreeFall — was at ICON Park and said the boy was secured in the ride's seat.

"Yes (he was secured in the seat) — that's what we know at this time," he said. "So again, we operate the ride with all the safety precautions in mind and everything is in place, and this is why we're doing an investigation."

A viewer’s video of the fall sent to @MyNews13 appears to show the teen slipping from his seat on the drop tower. I asked Slingshot spokesperson if he came free from the safety harness. He said he doesn’t know at this time. @MyNews13

A viewer’s video of the fall sent to Spectrum News 13 appears to show the teen slipping from his seat during the ride's drop. Spectrum News 13 asked Stine if the boy came free from the safety harness, but he said that has not yet been determined.

(Spectrum News 13 has made the decision not to include the video out of sensitivity to the victim's family.)

According to that same video, a female rider asks a ride operator why there is no seatbelt that clicks in the lap area.

The worker’s answer to her is unclear.

The question was asked to Stine, who said: “Our safety harness that goes over the chest of the rider is sufficient and obviously we’re gonna look into this further. We’re going to work with all the authorities and that’s all we can share at this point.”

“Our safety harness that goes over the chest of the rider is sufficient and obviously we’re gonna look into this further. We’re going to work with all the authorities and that’s all we can share at this point.” (2/2) @MyNews13

After Sampson fell and the ride was back at ground level, riders were heard screaming in the video "get us out."

The same ride operator that was previously mentioned is seen escorting the other riders off. A female ride operator walked up to him and asked if he checked the harness and he confirmed that he did.

Ken Martin, an amusement ride safety inspector based in Richmond, Virginia, since 1994, said it's important that rides have secondary — or redundant — safety devices in place.

The Slingshot Group's Orlando FreeFall ride only has one safety mechanism — a harness that pulls down over the rider’s chest.

“Typically on a ride similar to this, not only will we have the over-the-shoulder restraints, we’ll also have a strap that connects at the bottom of that restraint that clicks into the seat itself, similar to a seatbelt,” Martin said. “In general, it’s always a good idea to have a redundant safety device.”

Some rides even include a third safety mechanism, like a lap belt, Martin says. But the drop ride in Orlando has just the one – and there’s no standard, nationwide law requiring anything different.

For the most part, amusement park rides are self-regulated, according to Martin, who told Spectrum News, "at least 13 states don't require a certified inspector to come in and inspect the ride."

He did say Florida is one of the few states with “very good” ride inspection programs.

Spectrum News obtained the ride's operational manual. According to the document, the maximum rider weight for FreeFall is about 286 pounds. The victim's father has said his son was well over 300 pounds.

The manual also includes a diagram of the seats, which rely on a pair of valves to move them into the correct ride positions. 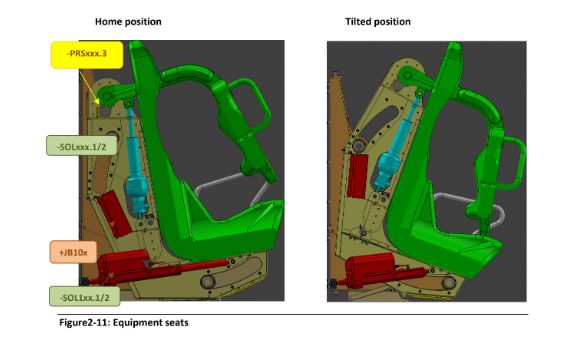 According to the manual, all ride operations must be overseen by a "Certified Operator" who completed a "factory authorized training program."

The certified operator's responsibilites include:

Florida in 2020 passed legislation to strengthen the state's oversight of amusement rides, which is handled by the Department of Agriculture and Consumer Services (DACS). The bill increased the maximum amount DACS can fine amusement park owners per violation: from $2,500 up to $10,000. And if a violation results in serious injury or death, DACS can fine park owners $10,000 or more.

The updated Florida law also grants DCAS subpoena powers, and makes it a crime for anyone to refuse testifying to those subpoenas.

Still, the lack of any national regulatory agency overseeing amusement park rides is a huge problem, Martin said – especially because 13 states currently don’t have any form of amusement ride regulations in place.

“Quite simply, this lack of proper oversight is like a fox guarding the henhouse,” Martin said. “It’s sad that it’s that way, and no two states or amusement rides are regulated the same way. We have consensus standards that most people comply with, but that’s not a law.”

Martin also says the general industry standard is to design rides that can support adults up to 180 pounds and children up to 90 pounds.

He said the heavier a rider is, the more negative G force is generated.

“If you had negative 2 G’s, take 200 pounds, multiply it by 2 and that's gonna be 400 pounds of pressure that are pushing against that ride and anybody in that ride.”

Officials react to the fatal fall

The SlingShot Group, which operates the Orlando FreeFall, released a statement on the incident saying, “We are heartbroken with the incident that took the life of one of our guests. We extend our condolences and deepest sympathy to his family and friends. We are working with the Sheriff's Office and ride officials on a full investigation. The Orlando FreeFall will be closed until further notice.”

I reached out to the SlingShot Group, which operates the Orlando FreeFall. I asked them what the safety protocols are for that ride - and whether a worker checks to see that the harness is secure after the rider puts it on. Below is the statement I was given. @MyNews13 https://t.co/w5YmCnUQxi pic.twitter.com/op9cj2RzJX

"I offer my deepest condolences for the family of the 14-year-old boy who died following the tragic incident at Icon Park. I look to receive more information about what happened in the incident and what will be done to prevent it from ever happening again," he stated in a press release.

According to the state's Department of Agriculture, a verbal and written report must be submitted by the park to the department.

Not the first fatal accident at ICON Park

This is the second death investigation involving a ride located at ICON Park within the past two years. In September 2020, an employee fell an estimated 200 feet from the Starflyer ride. Jake Kaminsky was conducting a safety check when he fell to his death.