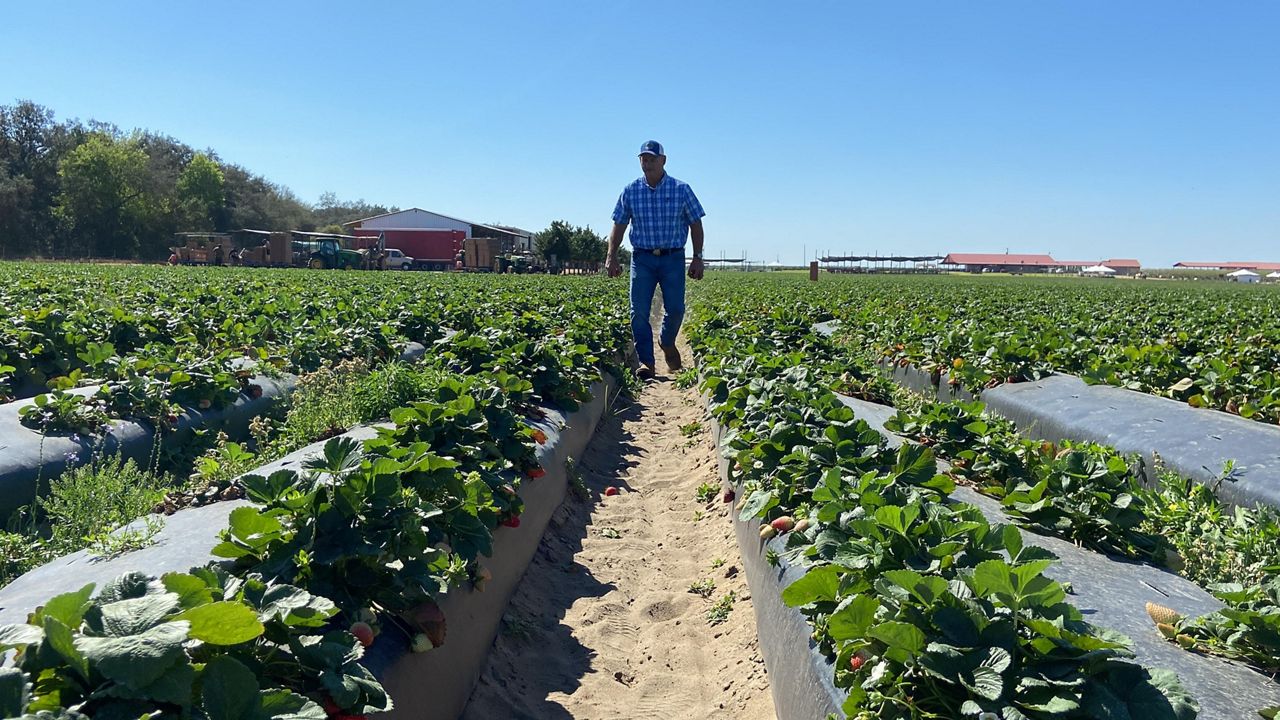 Strawberry grower David Hill says he would like to see a measure allowing expanded fertilizer use for citrus growers expanded to include other types of agriculture. (Spectrum News 13/Ashleigh Mills)

CLERMONT, Fla. — A state law to allow Florida citrus farmers to use more nutrients to grow crops beyond their previous fertilizing limits only needs the governor's signature to become law.

The law, which Gov. Ron DeSantis is expected to sign, currently only applies to citrus growers, leaving other farmers asking when they will get the same type of treatment.

And in general, the bill has environmentalists concerned about the impact additional nutrients will have on clean water and wildlife like manatees.

Farmer David Hill enjoys what he does, especially picking the strawberries that are ripe in season.

“I love doing it,” Hill said, showing off the latest ruby red berries at Southern Hill, his family’s U-Pick farm.

On his mind right now, however, is a recent bill that recently made its way through both the Florida Senate and House — Senate Bill 1000, which only needs Gov. Ron DeSantis' signature to become law.

Once law, it will allow special nutrient plans for citrus farmers in Florida — which would include creating things like individualized fertilizing plans, that, in turn, could lead to fertilizer use beyond the state’s previously set limits.

For now, Hill said he's able to farm successfully within the current fertilizer limits, but hopes the expansion for citrus growers will be extended to other types of crops in the future.

“It gives me a peace of mind knowing that I can do what needs to be done within those limits,” he said.

Not everyone wants to see an expansion of the rule, however. Environmentalists, like Save the Manatee Club’s Kim Dinkins, are concerned the measure will impact water quality and bring harm to marine life.

“More nutrients than are necessary will get into our waterways,” Dinkins said of the expanded limits for citrus growers.

Manatees, for example, could be impacted by potential fertilizer runoff — something Dinkins said they do not need after 2021, the deadliest year on record for the animals.

“So, as far as what I’m concerned about for Florida’s waterways, is that there will be additional pollutants getting into them, and we already know that nitrogen and phosphorus both are contributing to degradation of our water quality,” she said.

While Dinkins hopes the law won’t be a setback, Hill said he, and most farmers, will not over-fertilize if the limits are increased.

Farmers are good stewards of the environment, he said, adding that the rising cost of fertilizer would go a long way toward preventing over-use as well.