Bringing in the FBI will allow Orange County investigators access to the federal agency's technology to better search for clues to Marcano's disappearance, he said, adding that his office is doing everything it can to find her.

Marcano was last seen on Sept. 24, at her apartment complex, Arden Villas, in Orlando, and investigators said they may return there to resume looking for any information that might point to what happened to her.

Sheriff said emergency response team and others have conducted nearly 30 searches spanning Orange, Seminole and Volusia Counties. Says all leads and tips are being investigated and logged. @FBI is assisting in the investigation. @MyNews13

While members of Marcano’s family said investigators believe she could be within a 30-mile radius of the apartment complex, they are expanding their own search to New Smyrna Beach.

Family members report that officials told them a phone belonging to the person of interest in the case — 27-year-old Armando Manuel Caballero — had been in the city recently.

Family says law enforcement told them person of interest Armando Caballero’s cell phone pinged in NSB some time ago. Sheriff wouldn’t confirm ping locations happened there, but said family told they could hand out flyers/look there based on info they’ve received. @MyNews13

Mercado's neighbors at Arden Villas, located at 3303 Arden Villas Blvd., were notified on Wednesday night that their garages could be searched Thursday.

The complex promised residents there would be enhanced security at the gates, but when Spectrum News 13 left on Wednesday night, there was no sign of any added personnel at the entrance, which has upset some residents.

In a statement sent by the PR form for Arden Villas @DalyGray they say they have "repositioned a guard to the front gate to document all residents and guests leaving the premises." This is 1:50P on Wednesday (today). @MyNews13 #MiyaMarcano #news13orange pic.twitter.com/IPOW2G4gUB


This is the Arden Villas Apartments front gate Wed night - and there is no one checking people as they come in. After #MiyaMarcano went missing, a PR firm for the apts said they’d increase security measures, including adding security out front. Hasn’t happened yet. @MyNews13 pic.twitter.com/6utrF6FusO

And on Thursday morning, Spectrum News 13 did not notice anyone stationed at the gate.

No one at the front gate this morning either. Saw a car parked with its lights on in front of the building, facing drivers, a little earlier - but it left before I could ask whether it was security. @MyNews13 #news13orange https://t.co/e5qq3sErAU pic.twitter.com/hI5Da9fqf0

Marcano’s family believes she was kidnapped. Investigators feel there was foul play.

The Mina said earlier this week that Caballero — who made romantic advances towards Marcano, despite her reported lack of interest — was a person of interest .

He also worked at Arden Villas apartment complex. He used a maintenance key to break into Marcano’s apartment at around 4:30 p.m., Friday, about the time she was last seen, Mina explained in one of the press conferences during the week.

Her cousin Caili Sue said Marcano was supposed to fly to Fort Lauderdale Friday night before she disappeared. After she did not show up at the airport at around 10:50 p.m., her family became concerned, especially after they could not get a hold of her.

Marcano's roomate let her family into the apartment early Saturday. Family members said they found Marcano's bedroom in disarray, with jewelry on the floor, adding that is not typical behavior for her.

Caballero was found hanged in a garage building at the Camden Club Apartments in Longwood where he lived on Monday, according to a Seminole County Sheriff`s Office report. Investigators say he died of a suicide.

Now, the family is not only asking for the public’s help finding her, but also wants the FBI to take the case.

On Tuesday and Wednesday, the family have been conducting their own search with volunteers for the Valencia College student in east Orangey County and parts of Seminole County while the Orange County Sheriff’s Office has been conducting its own investigation. 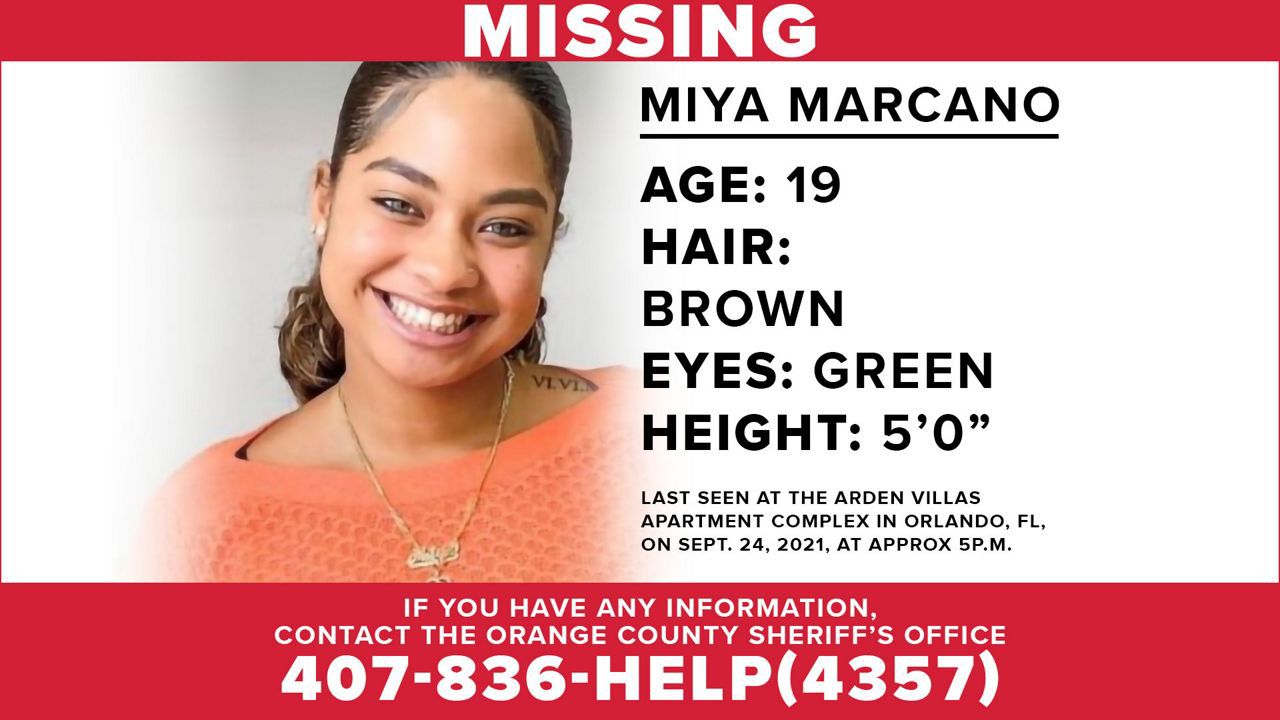