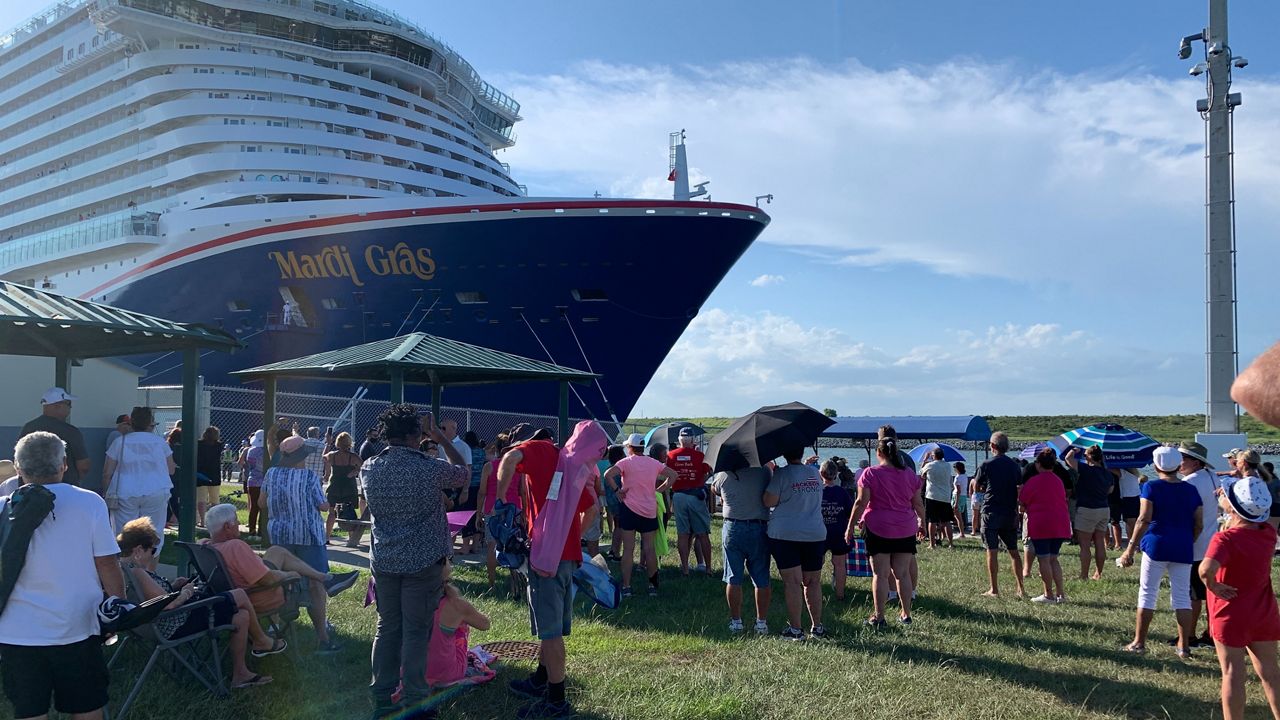 By Will Robinson-Smith and Emily Braun Brevard County
SHARE

BREVARD COUNTY, Fla. – After nearly a year and a half of being suspended due to the pandemic, the cruise industry is making a resurgence along the Space Coast.

Carnival Cruise Line's Mardi Gras embarked on its maiden voyage at 6 p.m. Saturday — a huge step forward for the industry.

“Look at all the people. They’re really enjoying themselves. It makes me jealous, makes you want to go book one. And I’ve never been on a cruise, so that’s definitely something that I intend on doing,” said Sebastian resident Tina Blackburn, who was among the dozens of people who gathered to wave farewell to the passengers and crew.

Betty Shipa was there as well — glad to see the cruise industry getting back on its sea legs.

“I was sad because, well, it’s money for the cruise line, losing money…and the islands are losing money. The economic part of it is drastic,” she said.

This is the FIRST ship with passengers on board to leave from Port Canaveral in 16 months. To boot, it was the maiden voyage for Carnival’s newest ship, the “Mardi Gras.” The occasion drew quite the excited crowd. @MyNews13 some were even chanting “Mardi Gras!” pic.twitter.com/uaJYJOnnfx

Carnival President Christine Duffy and Mardi Gras Captain Giuseppe Giusa led a “Back to Fun” ribbon-cutting ceremony and celebration officially welcoming guests on board on Saturday.

“It’s been a hard ride for port Canaveral because of our dependency on the cruise business. But we’re back and running," Captain John Murray said.

A day ahead of its plans to set sail, Carnival welcomed guests to tour the Mardi Gras, the newest ship in its fleet.

Dubbed a “Sip & Sea” preview, guests were able to view staterooms and various entertainment venues, along with riding the BOLT, the first roller coaster at sea. Everyone who attended Friday had to show proof of vaccination and fill out health forms.

Carnival President Christine Duffy helped kick off the revelry and noted that for paying guests coming aboard in the near future, the biggest changes revolve around whether or not someone is vaccinated against COVID-19.

“We have to know are you vaccinated or not because there are different protocols and procedures for people that are vaccinated than people on the ship that are not vaccinated,” Duffy said.

She noted that Carnival has extensive pandemic precautions and protocols in place, including testing for those who are not or choose to not bring proof of vaccination.

At check-in, passengers who aren’t vaccinated must show a negative PCR COVID-19 test, taken at anywhere between 72 and 24 hours before the sailing date.

Tests musts also be taken at embarkation and within 24 hours of debarkation on cruises longer than 4 days.

“We really are imploring our guests to read all of the information that we’re sending them, fill out all the proper forms. There’s a health declaration notice that must be filled out within 72 hours of boarding and that will make the boarding process easier,” Duffy said.

“That is all about protecting health and safety of everyone on board so they can enjoy their cruise.”

Carnival is the first cruise line to welcome back paying customers onto one of its ships. It comes as Brevard County, along with the rest of Florida, is seeing a spike in cases of COVID-19.

According to data released on Friday, 3,516 cases of the virus were reported between July 23 and July 29. That’s up from the 2,166 reported in the prior week. The positivity rate also rose during that time period from 20.3 percent to 23.9 percent.

Duffy said she was confident that the protocols that Carnival is taking are sufficient, even as the delta variant drives cases upward.

“We’re never going to get to zero, just like it’s not zero anywhere else. I think you’re actually safer on a cruise ship because of all the protocols that we have in place already and all of the public health standards that cruise ships have always followed,” Duffy said.

The return to paid cruising is very welcome for Port Canaveral. Port Director Captain John Murray noted that 43% of the port’s workforce was let go from last July and they are slowly bringing workers back.

“We’ve got many employees at Port Canaveral that we unfortunately had to put in a layoff status last year that are starting to come back. These people are just excited to get back to work,” Murray said.

“As cruise ships ramp up, they ramp up slowly, so not everyone is coming back at the same time.”

The return of cruising also allows Port Canaveral to finally make use of $155 million Cruise Terminal 3, the newest addition that was set to debut before the pandemic stalled cruising.

On Saturday, it will welcome guests onto the Mardi Gras, the first liquid-natural gas powered cruise vessel to sail from a U.S. port.