Wooden beams have been seen at some units at Images Condominiums on Images Circle in Kissimmee in an apparent effort to keep some units safe. (Spectrum News 13/Asher Wildman)

OSCEOLA COUNTY, Fla. — Just a day ago, Osceola County officials declared that 72 units at Images Condominiums were unsafe. This comes after attention has focused on the safety of condos after the Champlain Towers South building collapse in Surfside last week.

Three buildings at Images Condominiums on Images Circle in Kissimmee were deemed unsafe.

The Images Condominiums was built in 1990. There’s 11 buildings with 256 units in total. Only three buildings were condemned.

Some residents told Spectrum News 13 on Thursday morning there is not a sign on their building saying it is unsafe and they also say they did not receive a letter from their condo association.

In a letter to @OsceolaCountyFl the president of Born Engineers explains why he is contacting the county and the concern he has for those at Images Condominium. @MyNews13
Below is a piece of his letter. The engineer was at Images in April. pic.twitter.com/WRXSBfLaQ8

Osceola County says an inspection was requested by property management in April 2021.

The inspector with Bores Engineering said they found sagging floor conditions in the common areas like hallways, and serious signs of decay in wood framing on all three floors of the buildings, including the roof.

Company officials said they never heard back from the condo association, so on June 29 they decided to contact the county to report their findings. The county declared the buildings unsafe on Wednesday.

Engineering company Bores Engineering wrote a letter @OsceolaCountyFl about the Images Condominium. It read in part:

“…we found signs of serious decay in the wood framing members on all of the levels (3 plus roof). At one location we visually confirmed the decay. @MyNews13 pic.twitter.com/byTuuwDv92

“At the end of the day, we need people to be safe and secure where they’re living and these 72 units currently are not safe," said Choudhry. "We are requesting that the residents not stay there and we are providing assistance. We have already reached out and reached more than half of those residents to make sure they are getting the help they need.”

The Red Cross was on hand Thursday to help those who were asked to leave by placing them in a hotel, and one of those displaced was Virginia Fernandez who says work is currently being done to keep the building up and safe.

“They came and put those like bars in there like wooden bars to hold the three building apartment,” Fernandez explained. “With so many people and now they say they are going to fix it.”

Those wooden beams can been on the first floor now, Virginia also says there is some visible damage on the roof of her first floor.

Several cars were in the complex overnight and not all residents left. Spectrum News 13 did reach out to the county building inspector to find out if all buildings are unsafe, or if they have reviewed all the buildings.

According to some residents they have no warning sign on their building or received a letter recommending them to leave by the condo association or county. 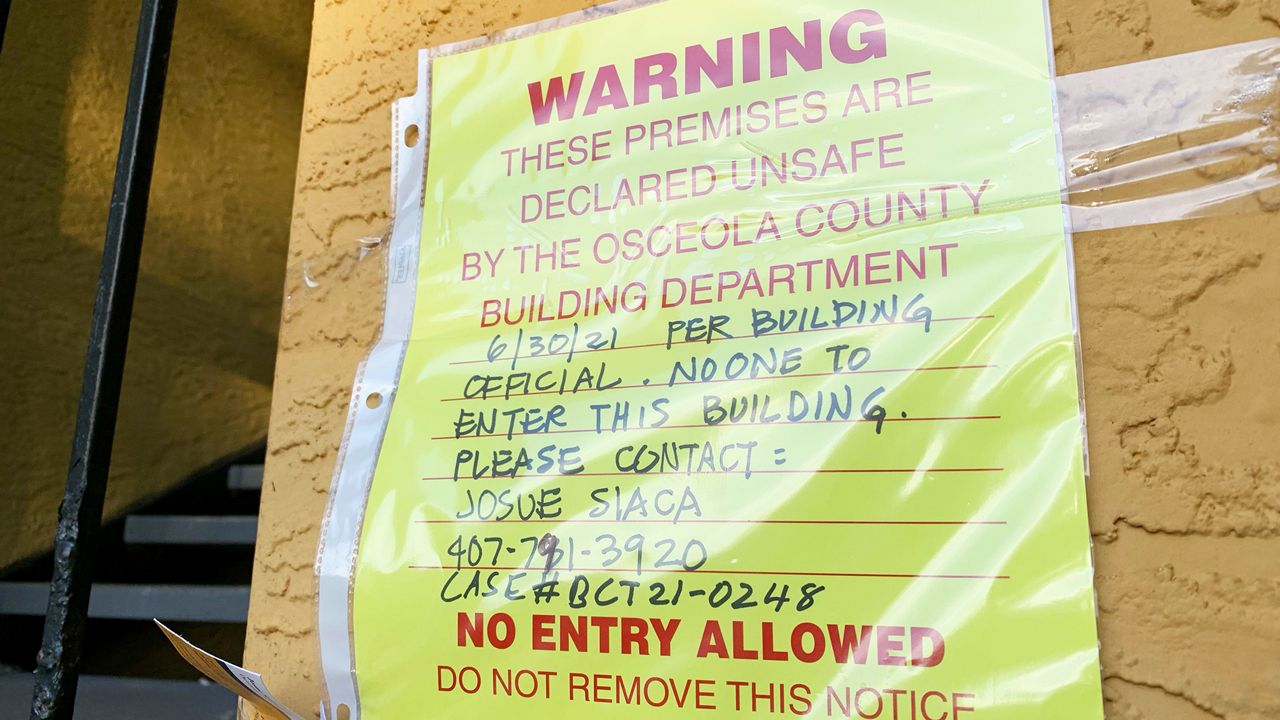