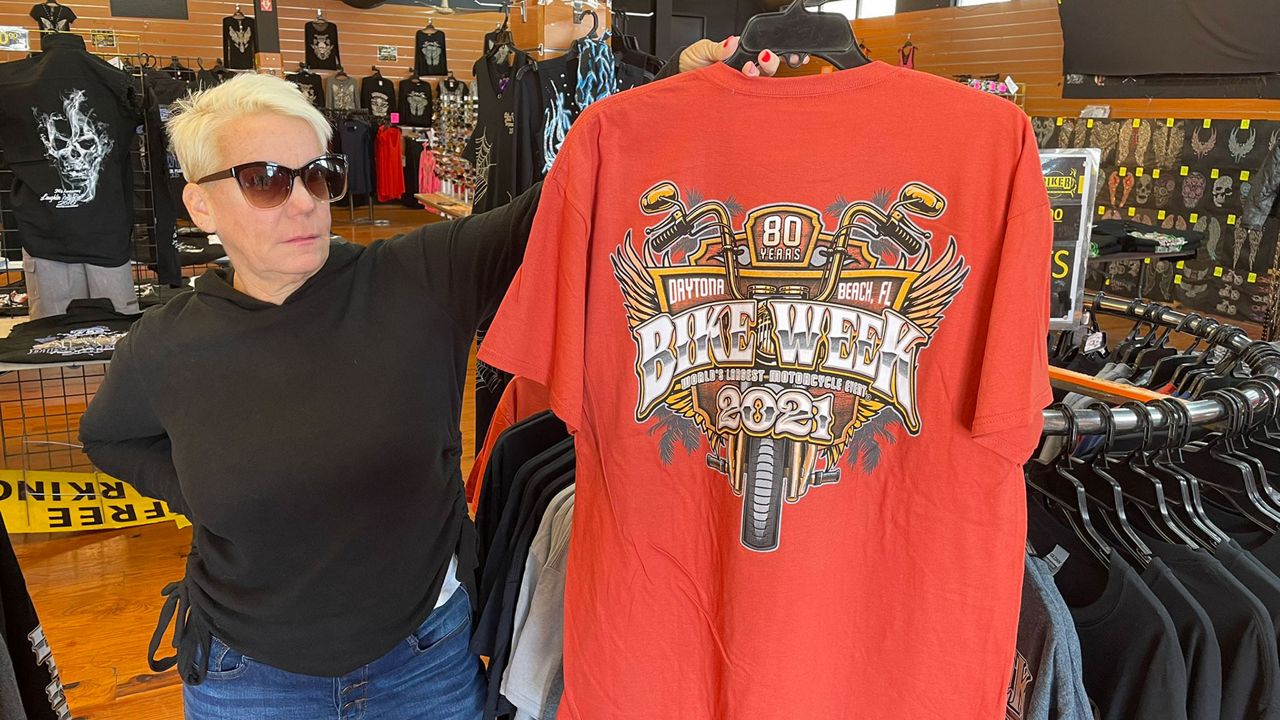 Kelly Green stocked up her business for Bike Week in March. But will the event happen? (Nicole Griffin, Spectrum News)

DAYTONA BEACH, Fla. — The 2021 Daytona Bike Week is just around the corner, but whether it is actually happening is still up in the air.

The mayor and city commissioners are s​lated to discuss​ the issue and vote at their meeting on Wednesday at 6 p.m.

Despite that, some businesses on Main Street are already preparing for the big event. Some places, like Biker Clothing Company, just finished stocking up on 2021 80th Anniversary Bike Week merchandise.

However, Mayor Derrick Henry does not think things should go on as if it is business as usual.

“The virus is really raging so I have deep concerns,” said Henry. “It's such a difficult decision but the reality is I feel bad because I realize that the businesses rely so heavily upon this event."

“I would like to see some balancing act," said Henry. "If you want to have outdoor vending, maybe they agree to have you know close the inside or maybe half the inside or a quarter”

Kelly Green, of Biker Clothing Company, is hopeful city leaders will decide this week to move forward with Bike Week as planned in March. However Mayor Henry tells me he has serious concerns. The city will hear potential plans this Wednesday at their commission meeting @MyNews13 pic.twitter.com/bcbj5WbRsJ

Last year, at the start of the pandemic, the city pulled permits for the last weekend of the 10-day event. Those permits allow vendors to do business and outdoor stages to be used, among other things.

"That was devastating, that was our last big day of the show, everybody knows in the business that Saturday is your biggest day for business and we were shut down,” said Green.

Then back in October, city leaders decided not to issue permits for the 2020 Biketoberfest event. Green says both decisions hurt her business greatly.

Henry explained all of these choices are tough ones.

“I’ve never had to make a decision that tore me more than the decision this time a little more last year when I had to pull back those permits. But we haven’t changed, in fact we are a little worse than we were at that time, so I don't know how I can in good conscience say that I did that and that all of the sudden we are OK,” said Henry.

While Green claimed she understands the city’s concerns, she is confident they can pull it off safely. But she’s worried she won’t get the chance, and is gravely concerned about what that will mean for her future.

Green believes with or without permits, she still expects bikers will come to town for their own Bike week, but she says it won’t have the same impact on local businesses.