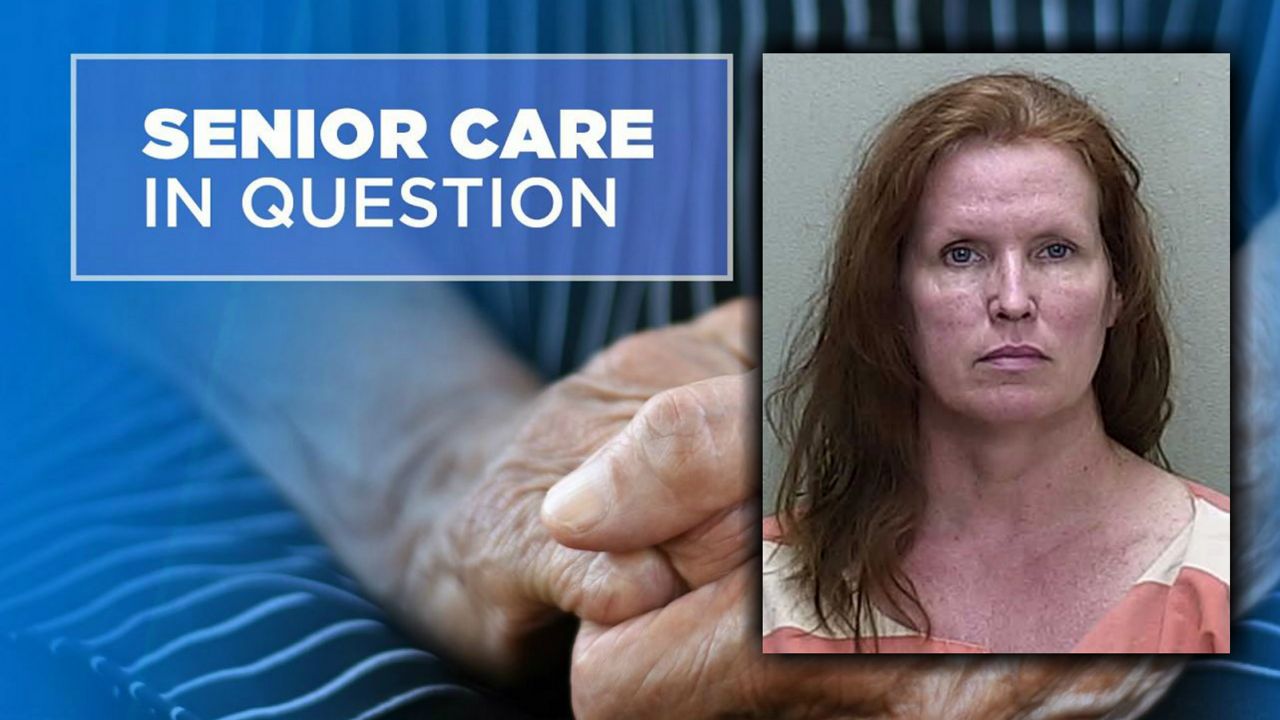 Rebecca Fierle relinquished or was forced to give up guardianship of 450 wards in her care. (Photo of Fierle from Marion County Jail)

OCALA, Fla. — Rebecca Fierle, the professional guardian ousted from hundreds of cases following the death of a ward in her care, has bonded out of jail after her arrest Monday night.

State agents arrested Fierle on Monday in Marion County, where she lives. Records show Fierle was booked into the Marion County Jail at about 6:30 p.m.

She bonded out of jail at about 10 a.m. Tuesday. She did not comment as she walked out.

The Florida Department of Law Enforcement said that Fierle was charged with aggravated abuse of an elderly person and neglect of an elderly person on a warrant out of Hillsborough County. The arrest was in connection to the death of 74-year-old Steven Stryker, a Brevard County man who died in her care last year at a hospital in Tampa.

"The guardian who caused my dad’s death has been arrested. It’s encouraging that the state has brought charges. But the problem of guardian abuse does not go away with her. The laws vary state to state and God forbid you, or someone you love, falls into the control of a bad one like her," Stryker's daughter, Kim, said Tuesday.

Fierle declined to comment coming out of the Marion County Jail Tuesday morning. She stayed silent when I asked if she had any kind of message for the family of the man who died in her care @MyNews13 pic.twitter.com/zgTSXuFlGn

Sources told Spectrum News the charges are related to a series of criminal investigations being conducted by FDLE and the Florida Attorney General’s Office. Those investigations are ongoing.

In July 2019, Orange County Judge Janet Thorpe first called Fierle’s conduct into question after the death of Stryker, a senior whom Thorpe appointed Fierle to care for as a professional guardian. The FDLE in its investigation said Fierle ordered a "do not resuscitate" order on Stryker against his wishes.

"Despite the wishes of the elderly man and those of his family and friends, Fierle-Santoian ordered his doctors ​not perform any life prolonging medical procedures saying she preferred 'quality of life versus quantity of life,' " agents said.

Thorpe accused Fierle in court filings of abusing her powers as a court-appointed guardian.

"She has executed numerous 'Do Not Resuscitate' (DNR) orders on many of the Wards under her supervision without family or court permission," Thorpe wrote. "She has been compensated as a Medicaid caseworker for her wards, having received payments from hospitals and other facilities without disclosure or court permission."

Following the July 11, 2019 emergency hearing in front of Thorpe, judges across Central Florida began to remove or accept Fierle's resignations in at least 450 guardianship cases.

Stryker’s family long accused Fierle and AdventHealth of improperly petitioning the court for guardianship in the first place.

Spectrum News's investigation into the claims of neglect and failures within the state’s guardianship system prompted Florida Elder Affairs Secretary Richard Prudom and Gov. Ron DeSantis to take action. Prudom told Spectrum News that his office has been involved in crafting legislation to give more safeguards to seniors. That legislation is now pending in the Florida legislature for the 2020 session.

In response to the issues highlighted in Spectrum News's reporting, DeSantis is also pushing for lawmakers to approve an additional $6.4 million to boost oversight of the state's guardianship program.

"I thought I would feel relief, but I’m just sad that this had to happen, and that one person can be allowed to cause so many people pain. This cannot be allowed to happen anymore to anyone. Demand better oversight, close the loopholes, hold lawmakers and judges accountable. Elder abuse is not isolated. It is a symptom of a very sick system," Kim Stryker said.

Making a scheduled appearance in Ocala today, Attorney General Ashley Moody took time to answer questions about Monday’s arrest of Fierle in connection to the death of Stryker.

“As attorney general and as any law enforcement prosecutor across the state we are not going to sit back and let people that were put in positions of trust take advantage of that position and neglect or abuse our seniors,” Florida Attorney General Ashley Moody said.

Attorney General Moody also noted that the state does not believe Fierle is a flight risk at this time, and when asked about the Medicaid fraud allegations against Fierle, Moody said that part of the investigation is ongoing.