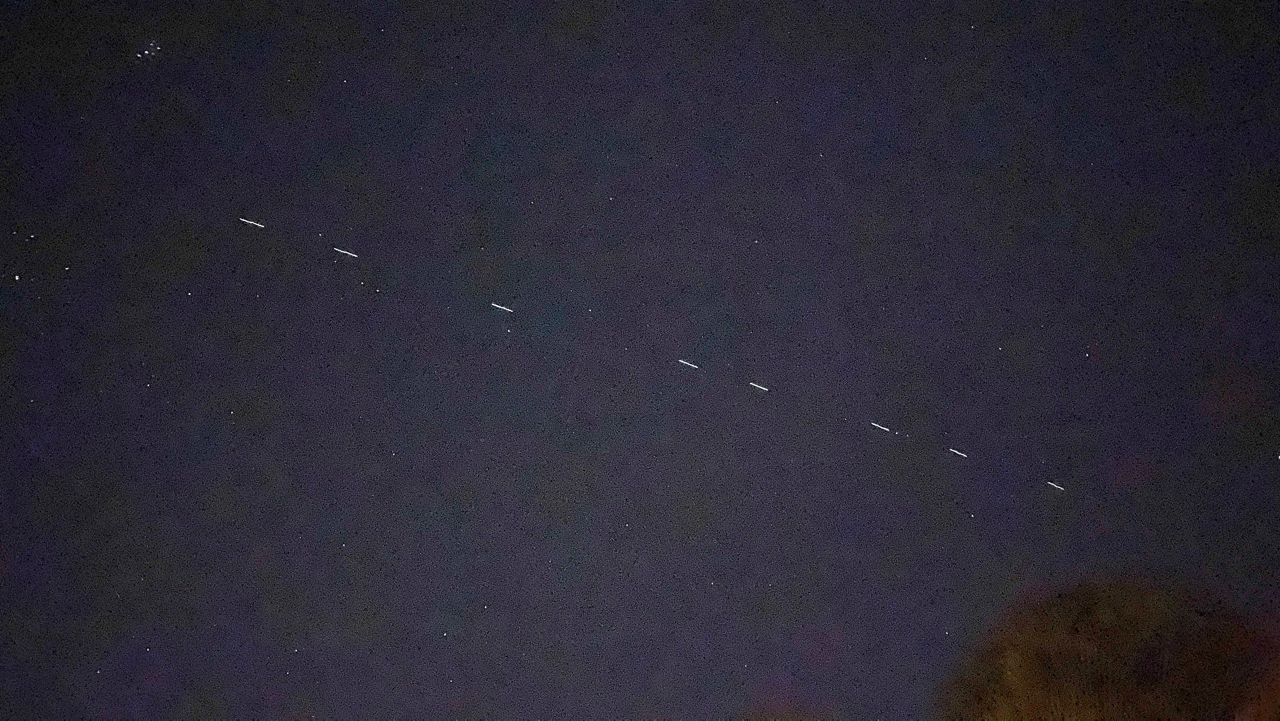 A cluster of Space X's Starlink satellites, some of the 180 now in orbit. (Jon Shaban/Spectrum News)

Strange Celestial Sighting Turns Out to Be SpaceX’s Starlink Satellites

CAPE CANAVERAL, Fla. — Sky-gazers around the globe are seeing something unusual over the past few months, leaving many to wonder — what are those strange objects dotting the night sky?

It's a worldwide event that began on the Space Coast.

For Dr. Dan Batcheldor, the head of Florida Tech’s Department of Physics and Space Sciences, when it comes to out-of-this-world phenomena, his logic overrides any speculations.

Batcheldor and his 8-year-old daughter stepped outside their West Melbourne home Sunday night and saw what the hubbub in the sky is all about — a cluster of Space X's Starlink satellites, some of the 180 now in orbit, all recently launched from Florida's Space Coast.

"I almost immediately realized it's the Starlink constellation," the expert, who has a Ph.D. in astronomy.

LOOK, UP IN THE SKY! wonder and amazement for unsuspecting night skywatchers, seeing all of the @SpaceX #Starlink satellites fly over. How you can track when they will visit your area @MyNews13 #News13Brevard @Jon_Shaban @FloridaTech pic.twitter.com/dk2KHOp2v3

But for so many others, the sightings seem out of this world, with some people thinking they were meteors or even something alien.

It’s tempting “to jump to these wild conclusions," Batcheldor said.

As more and more of these satellites head to space to join the constellation, critics worry how it will crowd an already jammed-back Earth orbit.

"Space debris is actually very well separated with hundreds of kilometers in between individual large pieces, and these pieces are being tracked, so we know where they are," he explained.

Some astronomers have balked at the brightness of the Starlink satellites, saying their brightness could disrupt views of the galaxy.

The batch that went up on last week's launch from the Cape has an experimental coating that Space X hopes will reduce the glare.​

The commercial company is aiming to launch up to 1,500 of these satellites in 2020 alone.