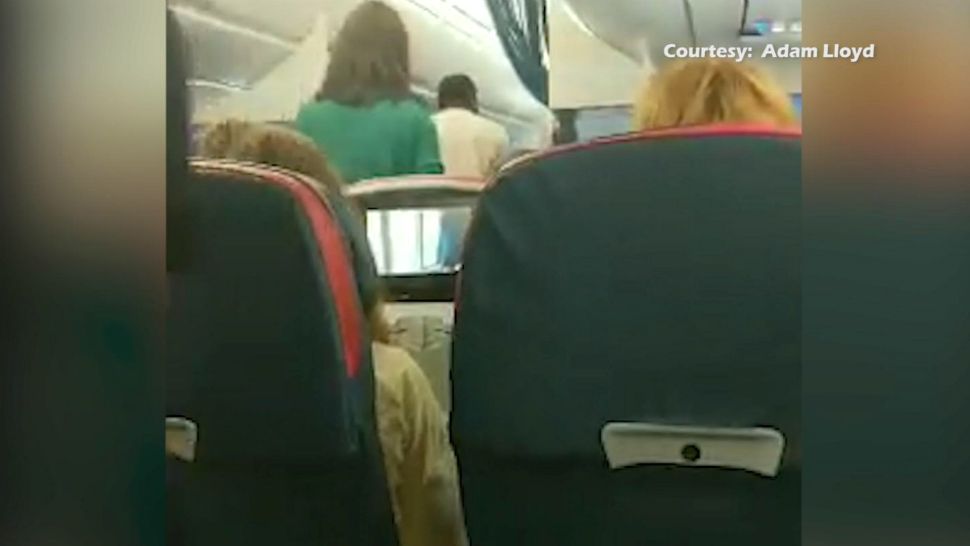 New video obtained by Spectrum News 13 shows a woman being escorted off a Delta flight at Orlando International Airport over the weekend after she was accused of not having a boarding pass or government-issued ID. (Courtesy of Adam Lloyd)

ORLANDO, Fla. — A woman who boarded a Delta Air Lines flight at Orlando International Airport over the weekend without a boarding pass or ID fooled a TSA agent by pretending to be a part of another family, multiple people with knowledge of the investigation tell Spectrum News 13.

Sylvia Rictor made a similar move at the Delta counter in order to sneak onto the plane without a boarding pass or government-issued identification, they say. The ruse almost worked — until Rictor picked a seat that was already taken, new video obtained by Spectrum News 13 shows.

On the video, taken in the plane, you can hear the Delta crew members asking the woman identified in police reports as "Sylvia Rictor" for her boarding pass and identification.

Rictor, who also said she was headed to Atlanta, was soon escorted off the plane.

According to newly released reports from Orlando Police, when officers met with Rictor, they also asked her about her boarding pass and whether she had identification.

She reportedly also told them she had thrown her boarding pass away and  "she didn’t have any identification."

Rictor was then told she had to leave the gate and was escorted to the public area of the airport terminal, where she got on an elevator to catch a shuttle.

When asked how Rictor managed to get by, TSA confirmed she breached its security checkpoint but said the specific details are under investigation. Spectrum News 13 has asked officials with TSA, Delta, and Orlando Police to confirm those details. They all reiterated it's still under investigation.

Spectrum News 13 spoke with the woman who was assigned to the seat that woman sat in.

Jenni Clemons from Georgia boarded Delta flight 1516 Saturday morning and she found a woman in her seat.

She immediately alerted a flight attendant.

"(The woman) couldn’t produce an ID. She showed us a picture of herself on a phone," Clemons said.

Clemons said the woman exchanged words with passengers and crew for more than 45 minutes, claiming she threw her boarding pass out.

Eventually, Orlando Police arrived on scene, and the woman was removed from the flight.

But she wasn’t the only one who had to get off the plane.

"We deplaned, and K-9 units swept the plane. About 15 or 20 agents showed up to set up search stations, and then every passenger was asked to show their ID and boarding pass again to TSA," Clemons said.

"I don’t know how someone could get past two security checkpoints without being caught," she said.