The U.S. Department of Education estimates Americans are past due on more than $1.5 trillion worth of student loan debt, with Florida ranking in the top 10 of states with the most number of defaulted loans.

A state statute allowing the Florida Department of Health to suspend medical licenses for defaulting on a student loan has gotten little attention, until recently.

Florida lawmakers first passed a bill in 2002, and from that point until the fiscal year ending in June 2017, there were a total of 31 medical licenses suspended due to student loan defaults.

Then came the surge.

In the past two fiscal years, extending from July 2017 to present, the Florida Department of Health has suspended at least 128 medical licenses because of student loan defaults.

Nearly as many, 145 medical licenses, were revoked in the same time period because of criminal charges being filed against other license holders.

The health dept. said approximately 900 licensed health care professionals were at risk of losing their licenses in the past two years because of loan defaults.

Furthermore, Spectrum News found that Florida is one of 12 states with such a law, but seemingly the only state actively enforcing the measure.

Officials in the 12 other states that allow license revocations due to student loan default — Georgia, Hawaii, Iowa, Kentucky, Louisiana, Massachusetts, Minnesota, Mississippi, South Dakota, Tennessee, Texas, Utah — all told Spectrum News they have not revoked any medical licenses for student loan defaults in the past two years.

"I Had to Drain My Savings to Catch Up"

Multiple other states, including California, Montana, and Virginia, have either repealed the law entirely or have repeal bills pending in their state’s Legislature.

“I love being a nurse, you get so much satisfaction,” said Joanne Ortiz, a cardiac nurse who lives in Brevard County.

Ortiz has spent 28 years in the health care field, the past 10 years as a registered nurse.

She recently faced uncertainty after the state suspended her medical license for defaulting on outstanding student loans.

“I had to drain my savings to catch up,” Ortiz said.

Ortiz paid an approximately $3,000 fine and negotiated new payment terms with her creditors in an effort to get her license back.

State law says individuals whose licenses are revoked must pay a fine equaling 10 percent of their outstanding debt, plus reach new payment terms in order to have their licenses reinstated.

State law also requires at least 45 days’ notice prior to a license being suspended.

Then, according to a statement from Florida Dept. of Health:

“Once a licensee submits proof of new payment terms on their loan and the Department verifies the information provided, an order lifting the suspension is drafted and submitted for signature under the authority designated by the state surgeon general.”

Ortiz said she initially did not know that auto payments on her loan stopped, and refutes being notified prior to her license being suspended. 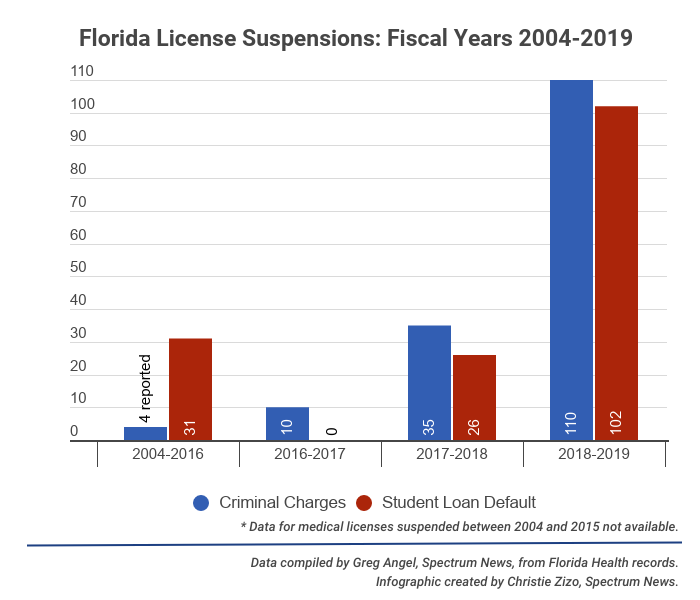 Multiple people told Spectrum News that they did not get any notice prior to being told their licenses were suspended, although spokespersons with the Florida Dept. of Health and Florida Dept. of Education say notices are sent by certified mail.

Spokespersons for both agencies say they make repeated efforts to resolve a case of default prior to taking action.

In a statement, the Florida Dept. of Education said:

“Prior to a loan defaulting, the Guarantor assistance, lenders make several attempts to establish repayment options for the borrower to prevent default. If the borrow does not establish a repayment plan after 270 days, the lender submits the loan to OSFA for claim payment. Once a claim is paid, the loan is considered in default status and a default notice is mailed to the borrower. OSFA initiates collection efforts on defaulted loans after receiving reinsurance from the U.S. Department of Education. OSFA attempts other collection activity that includes phone calls, correspondence, Administrative Wage Garnishment and Treasury Offset. Florida Statutes also allow for the suspension of Florida-licensed healthcare practitioners due to defaulted student loans issued by the state of federal government. No other licensing suspension provisions due to defaulted student loans are included in the Florida Statutes. OSFA started processing healthcare license suspensions in late 2016.”

The timing of OSFA’s initiation of license suspensions could be an explanation for the sudden increase in suspensions.

Ortiz says her concern is not only about taking away a person’s means to earn income, but the impact it’ll have on patients.

“Who is going to take care of the patients when we have no nurses?” Ortiz said. “Nurses can take five patients, six max, and if you have 25 people in the ER and you have three codes at the same time, who is going to do it? The patients are going to suffer because of it. As nurses, we want to provide the best care we can, so I don’t understand the reasoning for suspending licenses.”

"This Was A Mistake"

In 2002, the U.S. Dept. of Health and Human Services petitioned state lawmakers across the country to pass this legislation, citing a growing number of defaults.

Lawmakers at the time painted a picture of high-end health care professionals actively ignoring loan payments, but records show nearly all of those who have recently had their licenses suspended are traditionally lower-paid health care workers, such as nurses, home health aides, and paramedics. 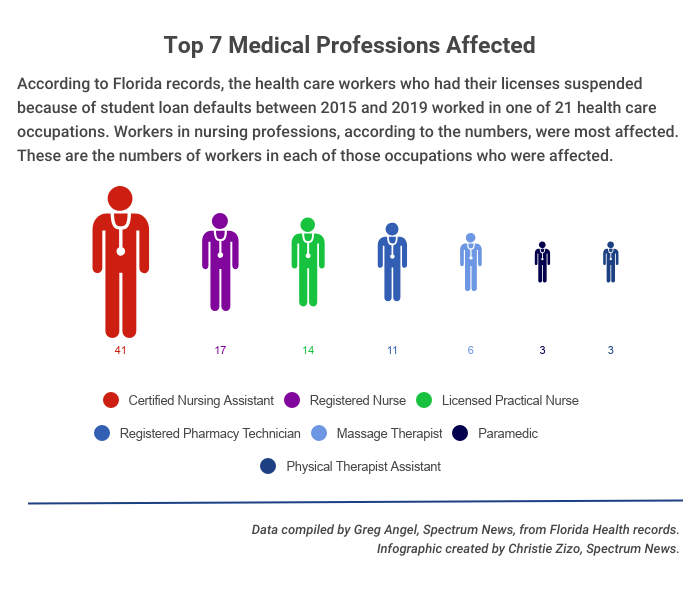 Sen. Marco Rubio, R-Florida, who was in the Florida Legislature in 2002, recently introduced the Protecting JOBS Act with co-sponsor Senator Elizabeth Warren of Massachusetts.

“I actually voted for the bill that allows this to happen when I was in the legislature, so this is part of an effort to correct that, because this was a mistake,” said Rubio.

The federal effort would prohibit states from revoking any professional license for defaulting on student loans.

The proposed legislation is still being debated in Congress. Rubio has also introduced the LOAN Act, which would eliminate interest on federal student loans.

“It makes no sense,” Rubio said. “If somebody owes money on student loans, they need a job in order to pay it, and if you take away, the license that allows them to work, then you’re making it even harder for them to be able to pay back the loan.”

The surge in the number of medical licenses comes at a time when Central Florida is seeing a rapid need for more workers.

“Right now in terms of openings, we have 10,200 openings across Central Florida, so it’s going to increase by 18 percent through 2026,” said Jesse Buxton, Senior Manager of Business Services with CareerSource Central Florida.

Buxton says Central Florida does not have the workforce to fill the current roster of openings, much less the additional 18,000 health care jobs expected to open in the coming years.

They’re trying to combat the challenge by hosting specialized programs, with an emphasis on debt-free training.

“It’s important for us to collaborate and make sure we’re working closely with colleges and universities, or even high schools, so we can offer them a career path and a journey,” Buxton said.

Prior to this year’s Legislative Session, Governor Ron DeSantis said he wanted to focus on reducing regulations and rules involving occupational licensing.

At time of publication, the Governor’s Office had not responded to multiple inquiries from Spectrum News about the state’s growing number of medical license suspensions.