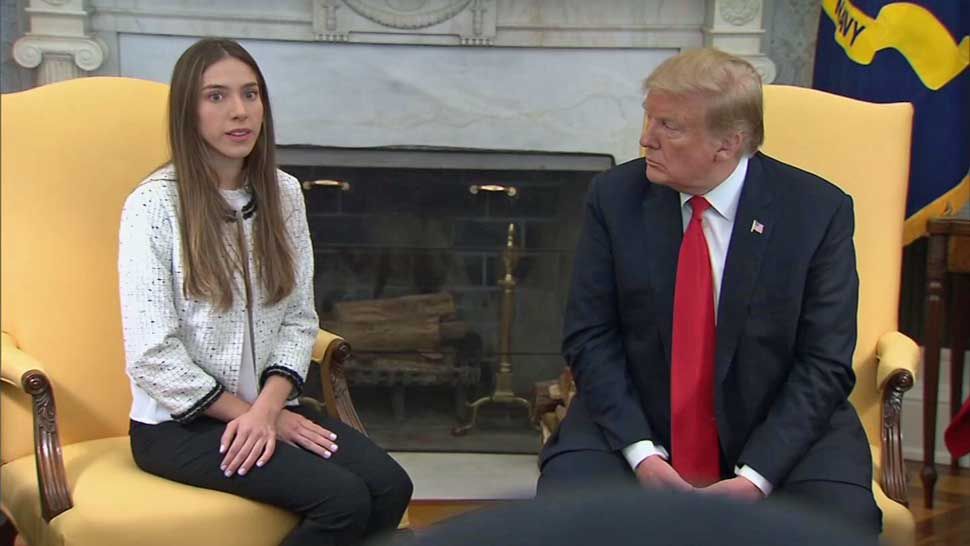 WASHINGTON — The wife of Venezuelan opposition leader Juan Guaido was in the nation’s capital for a number of high-profile meetings on Wednesday.

Fabiana Rosales is working to drum up support for her husband, who declared himself the country’s interim president in late January.

Rosales had meetings at the White House and on Capitol Hill. She told officials about the deteriorating situation in her home country.

"We are with Venezuela, we are with your husband, as you know,” President Trump said to Rosales during a photo op in the Oval Office.

Trump called on Moscow to stop intervening in Venezuela. In recent days, the Putin government sent two military planes to the country.

Reports say troops and equipment will be used to back the Maduro regime.

“Russia has to get out,” Trump said.

“The situation in Venezuela, in this hemisphere is an exceedingly dangerous and threatening situation for our national security,” said Rep. Mario Diaz-Balart (R-25th District), during a round table discussion with Rosales.

Rosales met with Florida lawmakers in the House and with Senators Marco Rubio and Rick Scott -- the delegation that continues to shape the federal response to the crisis.

“It’s in our hemisphere, those of us in Florida have a special responsibility to a former democracy that’s being destroyed by mafia-like figures,” said Rep. Donna Shalala (D-27th District) in an interview with Spectrum News.

The House of Representatives passed three bills this week to expand humanitarian assistance in the country, look into Russia’s growing military presence, and prohibit U.S. exports that could fall into the hands of the Maduro regime. Those bills now head to the Senate.

“I think it’s very significant. It sends a message to the world, to Latin America, to the hemisphere that the Democrats and Republicans are together on introducing bills - they are bipartisan bills," Shalala said.

Keeping up pressure on Maduro

Lawmakers plan to continue to put pressure on Nicolas Maduro to step down and make way for a new leader.

“We need to make sure they feel as much pain as possible so we can encourage a transition to the true and rightful president that has been constitutionally designated,” said Rep. Debbie Wasserman Schultz (D-23rd District).

Lawmakers are now looking to the President to expand temporary protected status for Venezuelans, although his advisors have expressed skepticism.

“We will get there," Shalala said. "My hope is that the President will do it by administrative action, which he can do."

Rosales plans to continue visiting different countries to rally support for her husband and shed light on the unrest in Venezuela.