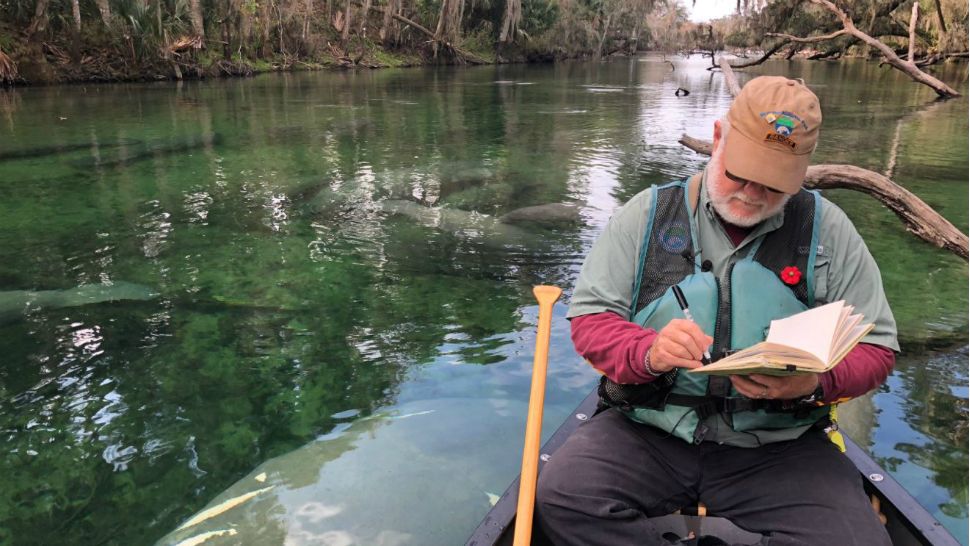 Wayne Hartley with the Save the Manatee Club counts manatees Friday at Blue Spring State Park. He's done this for 39 years using a canoe, pen and paper. (Spectrum News 13)

Manatees Are Turning Up at Blue Spring in Record Numbers. How Are They Counted?

ORANGE CITY, Fla. — A record number of manatees have been flocking to Blue Spring State Park in Orange City, which can make the job of counting them particularly difficult.

So how is it done?

"We’ve gone from 36 — well, we've got over 600 this year," Hartley said Friday, just a couple of days after park officials said they'd seen a record number of manatees seek refuge from the cold in the spring's constant 72-degree water.

COUNTING MANATEES: @savethemanatee researcher Wayne Hartley counts the manatee at Blue Spring State Park daily. He does it by hand, by recognizing individual boat scars. I’ll show you his method to the madness at 5:30 on @MyNews13 pic.twitter.com/EVEW94BKTG

Hartley records the number of manatees using only a pen and notebook. His method involves dividing the spring into sections, which he calls "transects."

"You paddle into a transect, and you count them real fast. Then, you see how many you can identify," Hartley said. "If your primary emphasis is the counting, then you move along fast so they don't move ahead of you and get counted over and over again."

From there, he uses a chart showing the scars of all the known manatees in order to identify them.

"(People) have fingerprints, they have boat scars," Hartley said. "So we can tell them apart."

The park rangers at Blue Spring do their own daily count as well.

"My primary emphasis is on identification of the animals, and I come out in a canoe," Hartley said. "The park walks the boardwalk and counts from there."

According to Hartley, most of the time, their final numbers are different. This could happen because their counts are conducted at different times of day, or some of the manatees might get spooked and leave.

"What's amazing is when they do come in very close together," Hartley said.

Hartley's numbers are used for the Save the Manatee Club and the U.S. Geological Survey Sirenia project. The numbers that the park rangers record go to the St. Johns Water Management District.

Blue Spring is a popular place for manatees, but it's not alone. Wayne Hartley with Save the Manatee Club suggested a few other places around the state.