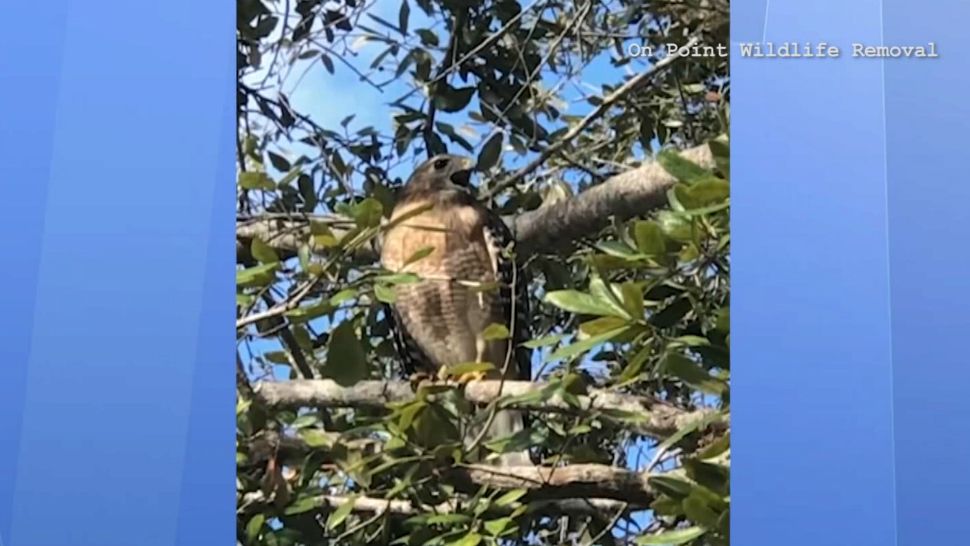 A pair of red-tailed hawks have been attacking people in the parking lot of a Viera Holiday Inn. A professional wildlife trapper said no eggs have been found in their nest, so it's unclear why they are attacking. (On Point Wildlife Removal)

Attacking Pair of Hawks Send More Than Dozen to Hospitals

VIERA, Fla. — A pair of hawks attacking people in the parking lot of a Brevard County hotel have sent more than a dozen people to hospitals.

It's unknown why they are going after people, as no eggs have been found in the nest.

"I just swooped down and attacked my head," said Cyndi Mara, who last week was walking into her job at the Chick-Fil-A next door when she was attacked.

"(It) jarred me, and I looked up and saw a bird flying away," she said.

A red-tailed hawk had clawed the top of her head as she walked from the Holiday Inn parking lot.

"Wow, that hurts, and I went inside, touched my head, washed my hands, and they were bloody," Mara said.

Mara isn't the only person attacked by the breeding pair of hawks building a nest in a nearby tree. A wildlife trapper called in said 14 people were victims late last week.

They all went to a hospital. Mara didn't have to get stitches, but some of the others did, including one man who had to get 17.

"The Holiday Inn here, safety of their guests is their No. 1 priority," said James Dean with On Point Wildlife Removal. "And that's the reason we got on it quickly like we did."

The trapper destroyed the nest with the help of a fire department ladder truck. But Monday afternoon, there were at least one of the hawks still flying around nearby.

"I listen now when I'm walking to and from the car," Mara said.

The red-tailed hawks are protected under federal law, but the trapper said he has permission from the Florida Fish and Wildlife Conservation Commission to capture, remove and release them into a wildlife conservation area.

More than dozen people sought treatment at hospitals recently after being attacked by a pair of red-tailed hawks in the parking lot of a Viera Holiday Inn. (On Point Wildlife Removal)