Artisans are currently transforming blocks of ice into sculptures inspired by Dr. Seuss' 'How the Grinch Stole Christmas' for the upcoming ICE! exhibit at Gaylord Palms. (Spectrum News/Ashley Carter)

KISSIMMEE, Fla. — Gaylord Palms Resort is getting ready for the return of its centerpiece holiday attraction, ICE!, which this year will be inspired by Dr. Seuss’ “How the Grinch Stole Christmas.”

Inside the exhibit space, dozens of artisans from China are hard at work transforming blocks of ice into sculptures and scenes that depict moments from the classic holiday story.

Earlier this week, Spectrum News Attractions Insider was allowed to go behind-the-scenes for an early peek at the progress being made on the exhibit, which is scheduled to debut at the Kissimmee resort on Nov. 18.

When ICE! begins its six-week run, it will feature character sculptures showcased in about nine different scenes inspired by the Grinch.

For now, the space, kept at a frigid 9 degrees Fahrenheit, is filled with everything from chainsaws and work lights to blocks of ice and partially completed Grinch sculptures. Many of the sculptures are created in stages, which explains the few headless Grinch sculptures. The artisans will carve different parts of the characters separately and then “glue” them together using water.

After they are made, the sculpture pieces are covered to prevent any damage. 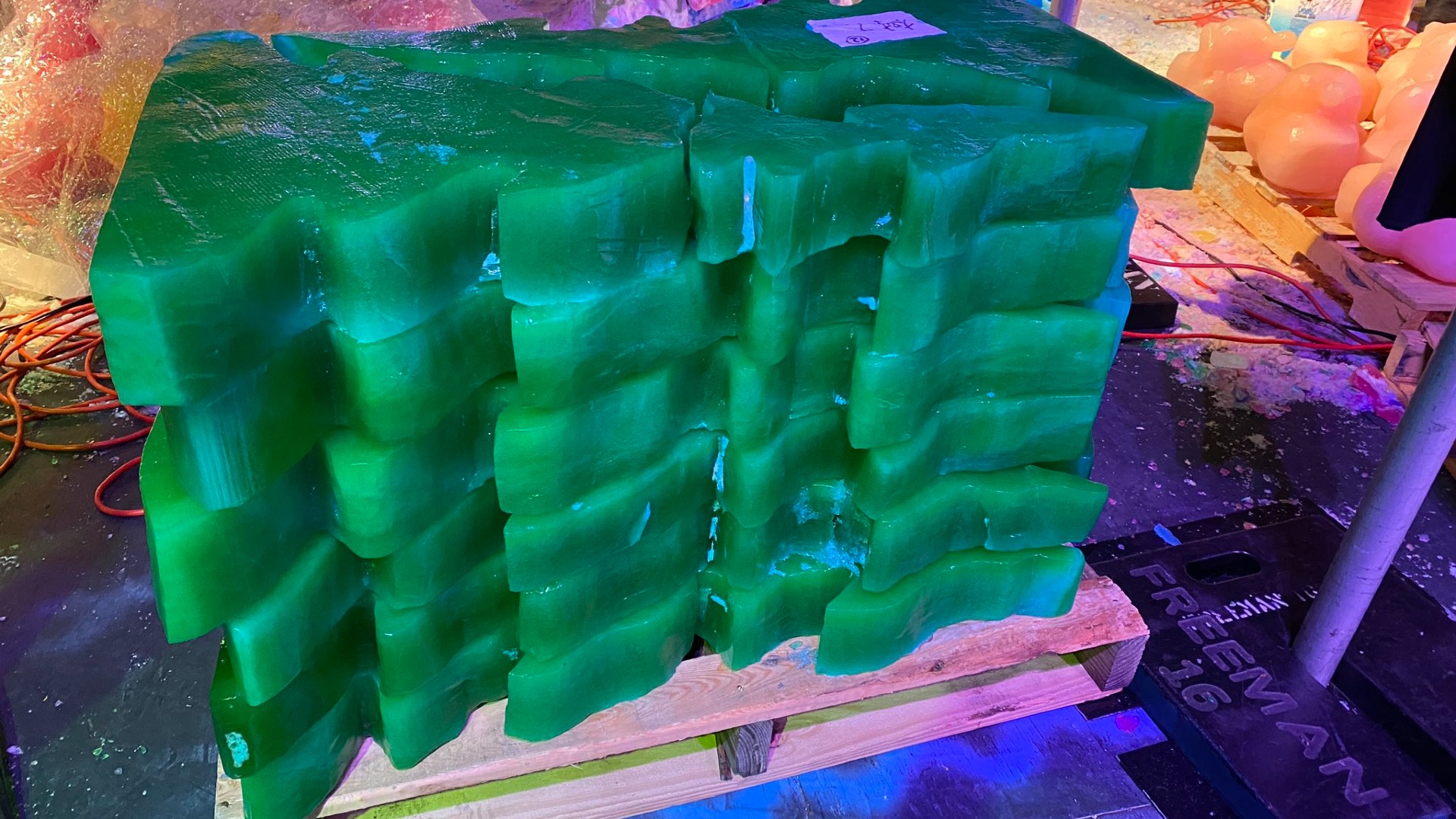 In addition to the pieces, the room is filled with ice blocks, ready to be carved. Some blocks are clear, while others are bright colors of blue, red and green.

“Each kind of ice is made differently,” said Andres Calvo, head of creative entertainment and special events at Gaylord Palms. “The very clear ice is frozen very, very slowly, so it keeps that clear look. And then all the different color ice, it has to be frozen both slowly but we use food coloring and the food coloring has to be stirred constantly during the freezing process so it remains even and doesn’t fade out during the attraction.” 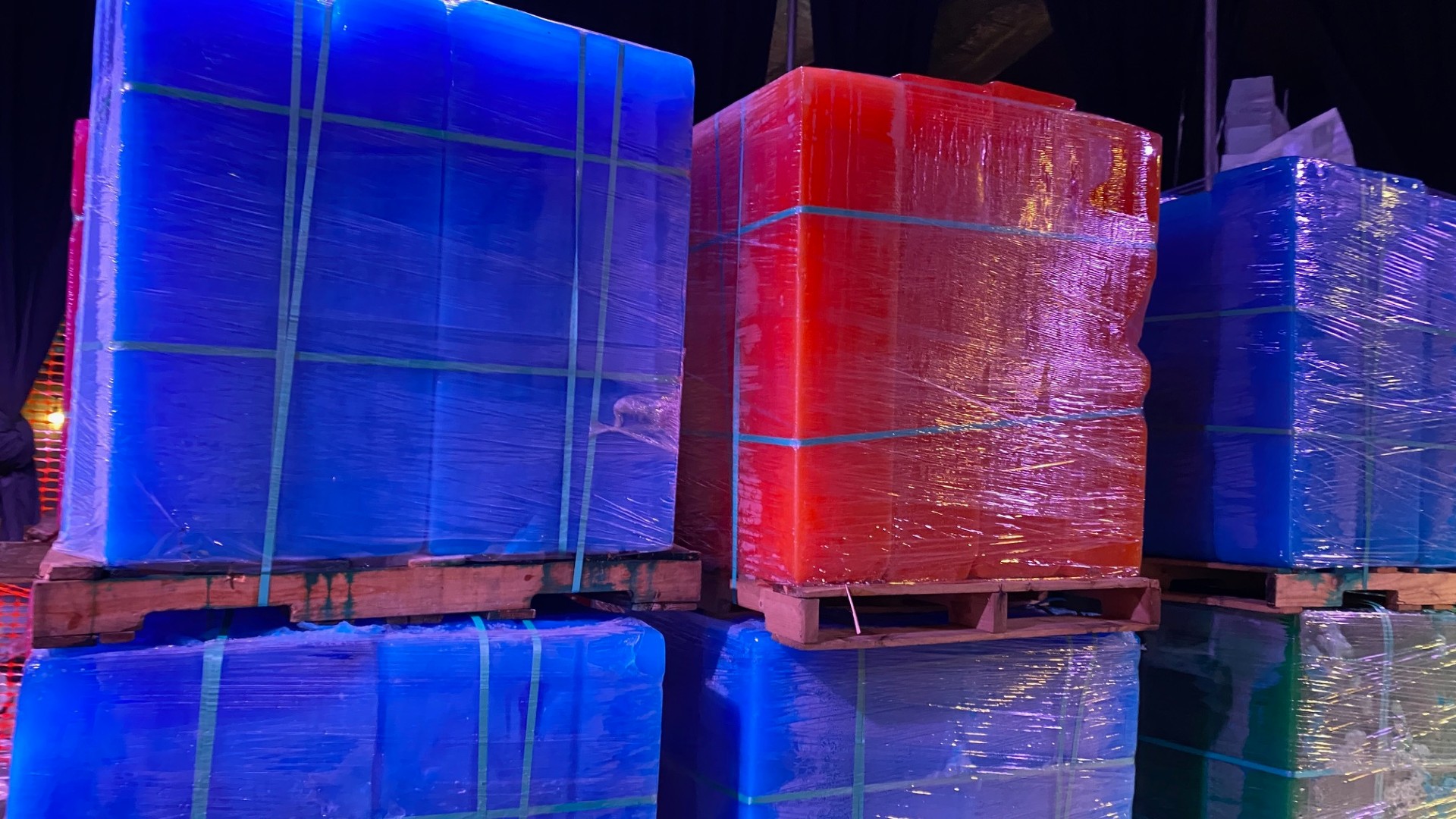 The carving process takes about 30 to 33 days, with the artisans working about 10 hours a day on different parts of the 20,000-square-foot exhibit. By the time they finish, they will have carved through nearly 2 million pounds of ice.

ICE! returns to Gaylord Palms after a two-year hiatus caused by the COVID-19 pandemic. In years past, the exhibit has featured themes inspired by “The Polar Express,” “A Christmas Story” and “Frosty the Snowman.” But this year will mark the first time the Grinch theme has been used at the resort. And it will be a different experience than previous versions at other Gaylord properties.

“If we have guests who have gone to the Grinch at other properties, this has been completely redesigned this year,” Calvo said. “So even if you’ve seen it before, you’ve never seen it before.”

Among the scenes visitors will see as they make their way through the exhibit include the Grinch with his canine sidekick, Max, and the final feast scene. 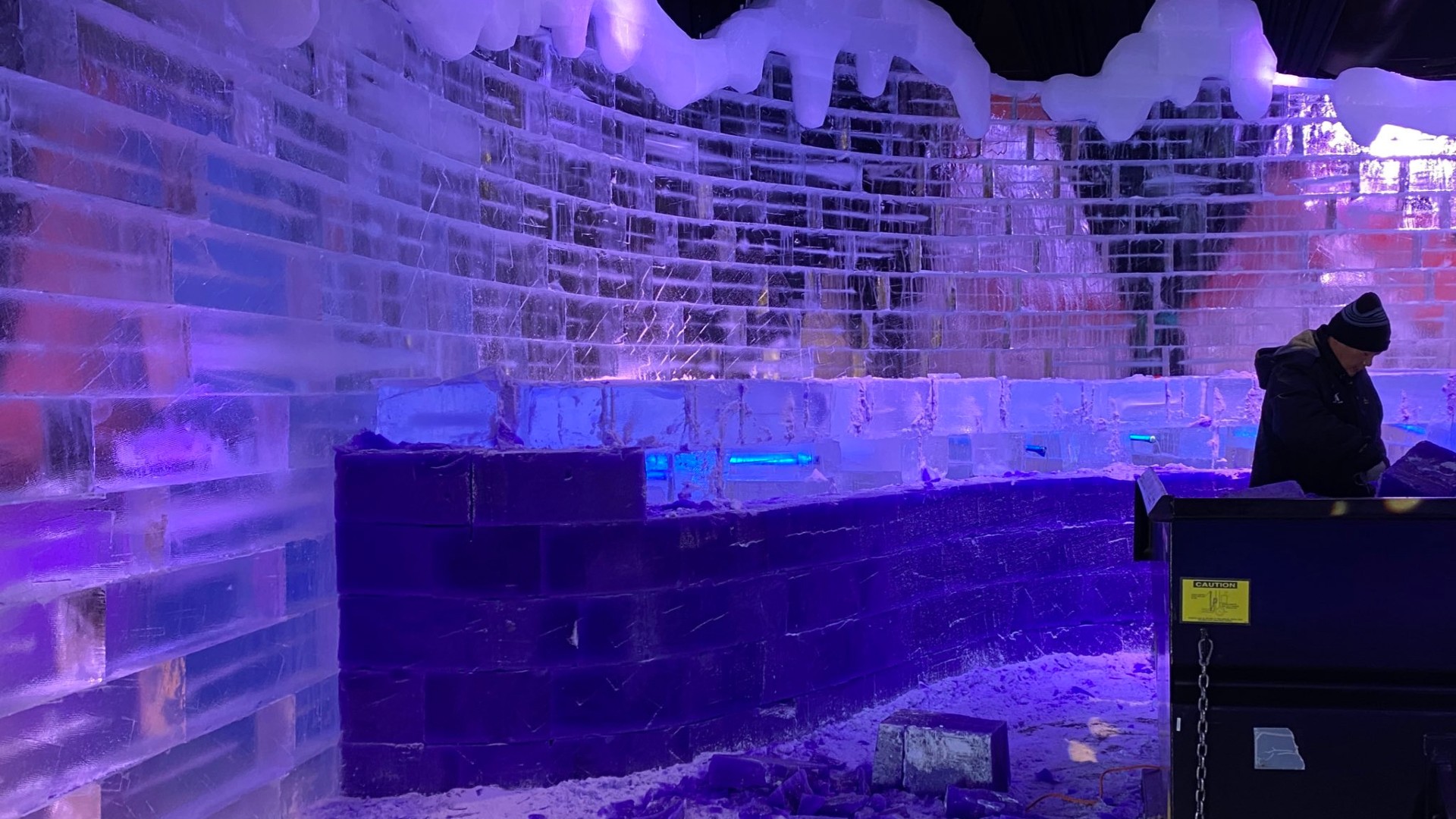 In addition to the scenes, the exhibit will also feature the popular slide room, with five ice slides.

For those worried about the cold, Gaylord Palms will give visitors blue parkas to keep them warm during the experience.

The ICE! exhibit at the resort will also include something that’s not offered at the other Gaylord properties: a carver’s showcase. Once the exhibit opens, some of the artisans will remain and do live carving demonstrations.

“It’s not something you often get to see, that artistry. So it’s something that we definitely continue to want to offer to guests who come to ICE,” Calvo said.

ICE! is just one part of the holiday festivities planned at Gaylord Palms. Right now, the resort is wrapping up its Halloween activities. But starting next month, it will start to make the transition to holiday decor — including Christmas trees and lights in its giant atrium.